When a happy ending left me hollow: Samurai Champloo

Posted on November 2, 2008 by ghostlightning

The key to enjoying a subject is to manage your own expectations. I’ve intuited this over the last couple of years when my anime consumption started increasing. This key hasn’t prevented me from dropping a number of series that are acclaimed and popular. It did however, allow me to read subjects in ways I otherwise wouldn’t because I was not getting what I expected from the anime. This accounts for the diversity of my viewing selection, while I retain my preferences for robot anime.

I didn’t expect a Cowboy Bebop from Samurai Champloo. Spike Spiegel’s swan song still stands out in my mind as one of the finest finales in anime. It punctuated a drawn-out horn solo celebrating, but mostly putting up with the emptiness of life in space after the colonization of the solar system. Samurai Champloo echoed that sadness – a kind of resigned and uncommitted farewell to the age of samurai. 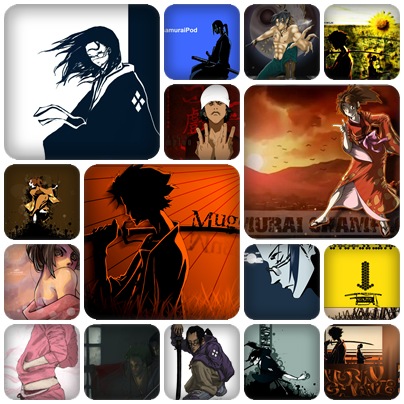 With Cowboy Bebop, through its tragedy, I felt nothing else but vividness: for music, for discourse, a longing for a smoke and someone to talk to. Cowboy Bebop’s finale made me want to be around humans. Samurai Champloo had all its cast members improbably live through their final battles and pretty much find whatever was missing in their lives that made them want to go on. Their eventual breaking up however, even if pregnant with the possibility of new life, gives me nothing. Not disappointment, not elation, not a thing. It doesn’t quite leave me to a kind of apathy, because here I am, writing wanting to care about them still. But all I have is an absence of feelings, and I realize how much I long for these feelings: make me mad, fill me with sorrow, stuff my heart with bitterness and revulsion if you must. But don’t leave me with nothing!

I understand that throughout the series, even as the age of the Samurai withers around them – rarely in overt ways, the hip-hop style and urban culture presentation of the adventure seemingly indicates a positive kind of change is in the air. There’s new life in the same spirit of the passing age, even if it is a departure from the traditional and honored forms. This is probably best exemplified by heirs of the Niwa dojo, who didn’t continue with the martial arts but found expression in graffiti. I sensed Samurai Champloo wasn’t going to be a tragedy. Cowboy Bebop only had a mad cartographer that had a misplaced belief that the Earth’s surface can be habitable once more despite the perpetual rain of lunar debris. I’ve come to the idea that the metaphor for the Earth in Cowboy Bebop is in the episode where the Earth references (and the storylines of 2 other cast members) reach their end: episode 24 “Hard Luck Woman“. A broken bird, and she just can’t buy a break. Spike’s death was just the punctuation mark. What then is a possible metaphor for Samurai Champloo’s changing Japan?

Part of my problem with Samurai Champloo is how Jin managed to live after his suicide technique. The premise of the technique, a final recourse against a technically superior opponent, goes like this: let your opponent connect: the moment his strike lands will yield an opening for you to strike back. He is told by his master to use this technique only as a final recourse. I’m bothered with Jin’s survival because his opponent, Kagetoki “The Divine Hand” Kariya is decidedly superior. The blow that Jin allowed him to land should have been a fatal one. It doesn’t make enough sense to me that a cut at that level and in that situation didn’t irreparably slice Jin open.

Had Jin died, it would be tragic but there’d be closure that can open up a future for Mugen and Fuu. The thing is, the story has been set up for a Jin v. Mugen final, and I don’t blame the creators for their commitment to it.

Mugen’s battle needed to be symmetrical with Jin’s, and this was accomplished with 3 opponents, whose styles all somehow evoked – when they couldn’t exactly mirror, Mugen’s unorthodoxy and randomness.

As a contrast to Jin’s formal kenjutsu duel, fully steeped in bushido forms and codes, Mugen’s fights are chaotic and rife with sneakiness and tricks. Nobody fought “fair.” If Jin’s opponent is formidable and is portrayed to be so through his technique and anticipation, Mugen’s foes (Umanosuke, Denkibou, and Toube: brothers) had wild physics and escalating dirtiness in the tricks they employed. To match the implausibility of Jin’s survival, Mugen lives through a massive dynamite explosion.

Here’s the symmetry of the two (penultimate?) battles:

Then they try to fulfill their promise to fight each other after fulfilling their mission for Fuu. But at this point their characters have grown such that they fully appreciate what they’ve come to mean for each other. They’ve found friendship in an otherwise empty life, and this has made them forsake the now nonsensical promise.
It should have been a really touching scene. But the sheer demand on the suspension of my disbelief distracts me from its poignancy. The demand still distracts me even at the crossroads where all three go in separate directions. The separation feels forced: there was no real need to part ways. There was no new direction in each of their lives other than they want to live, and the reason for such was that they found each other. So why part ways then?

Well, it certainly looks dramatic I’ll give them that. It provides another sense of symmetry that the series, for all its claims of being a mish-mash hangs on to beyond my abiltiy to understand.

So what am I left with? It’s not that I don’t get the big picture, I gave Champloo the benefit of the doubt for that. I bought the into big picture at the beginning of the series: Individuals find meaning in their empty lives through friendship with each other as the era that made them so fades away. I bought into the storytelling and into the characterizations with all their idiosyncrasies. I feel right now that they tried just a bit too hard to be cool, when I don’t feel they should even try anymore. The whole idea is cool. Most of the characters are cool. I felt the ending was forced into a tight symmetry, and it betrayed the mashup style – betrayed the chaos it portrayed, the kind of chaos that was cool. Instead it went for classical ideas of completeness and sensibility. They just had to end up that way, against all odds and against most sense.

So right now I’m having a smoke with Faye and Jet, as they talk about Spike a bit. I want to tell them about this girl Fuu, who forced two fools to help her find a samurai that smelled of sunflowers, and gave them both reasons to live in the end. Jet seems to let on some interest, but Faye is yawning already. I’ll tell them anyway, I don’t think they have anything better to do.

I entered the anime blogging sphere as a lurker around Spring 2008. We Remember Love is my first anime blog. Click here if this is your first time to visit WRL.
View all posts by ghostlightning →
This entry was posted in analysis, comparative and tagged cowboy bebop, fuu, jin, mugen, samurai champloo, spike spiegel, spoilers. Bookmark the permalink.

23 Responses to When a happy ending left me hollow: Samurai Champloo