Aina Sahalin: The Vagina of Peace

Posted on February 14, 2009 by ghostlightning

Happy Valentine’s Day! It’s a day to remember love! However, we won’t be doing a Macross post today because I want to share with you a great moment in animation. This is from Mobile Suit Gundam: The 08th MS Team; one of my favorite installments of the franchise. One of the remarkable things about this show is the Capulets vs. Montagues kind of love story between a young commander in the Federation forces and an experimental mobile armor pilot from Zeon.

What makes the love story remarkable, among a number of reasons, is the sudden and utter turnaround in attitude by the Federation commander Shiro Amada after a sexual encounter with his paramour in the snowy mountains.

Aina is a beautiful work of character design.

Shiro was present at his homeland, Side 2, during the initial Zeon G3 poison gas attacks on the colonies in the first weeks of the One Year War, witnessing all of the fellow colony inhabitants die horribly around him, Shiro saved himself only because he was lucky enough to wear a sealed space suit. Witnessing this wanton civilian death filled Shiro with a deep hatred for the Zeon, and everything they stood for. 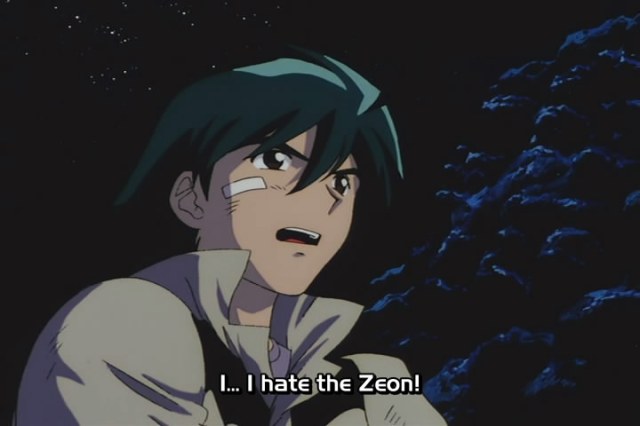 I was actually surprised, to be quite honest, of this declaration of hatred. In episode one he showed remarkable compassion to a Zeon pilot he engaged in space.

Despite this hatred, I never saw Shiro display any actual bloodlust. I saw in him an eagerness to prove himself as a leader to the more experienced members of the 08th MS Team, which led to several reckless moves. But that is all, I never got the impression that he is a hateful or bitter victim of war.

Again, it felt convenient that Shiro was especially hard-line anti-Zeon in this episode. Nonetheless, I accept that he does carry some bitterness after surviving the Zeon gas attack in his colony.

The pilot Shiro showed much compassion for in the first episode is Aina Sahalin herself, who was especially touched by his behavior. She too, was apparently led to think that the only good Feddie was a dead one. 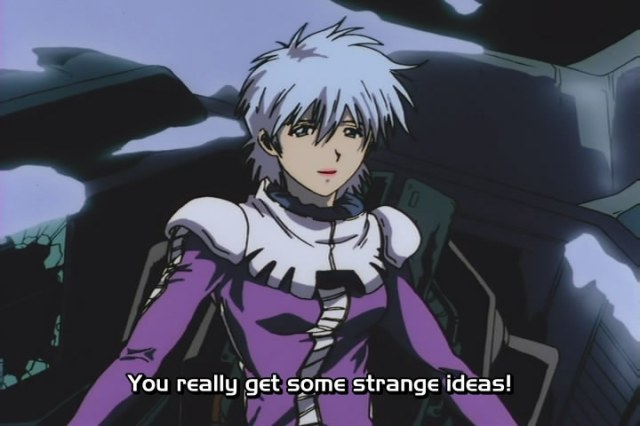 Oh Shiro! They were freezing up in the mountains and his hands were showing symptoms of frostbite. Aina told him he needed to warm them, so Shiro used the Gundam's beam saber to make an onsen in the mountains.

For whatever reason, Aina left Shiro a treasured keepsake – a pocket watch that’s some kind of heirloom of the Sahalin. This encounter (Shiro actually brought down Aina’s mobile armor, though not without critically damaging his Gundam) allowed him to return it.

The pocket watch had a photo of Aina and Gineas Sahalin (her brother). Shiro had thought he was her boyfriend.

At first I thought this relationship was going to be a tad forced, but given the events of the first episode it felt inevitable. So I just kicked back and enjoyed the romance. It was quite romantic up in the mountains.

And Aina happens to be the hottest.

You know you want to, Feddie.

He really tried not to look.

They actually started talking, getting to know about each other while in the hot water. To his credit, Shiro did his best to listen – even though he probably didn’t understand much about Gineas and what he and Aina did in their work on the ground. And I thought nothing more would come out of this romantic interlude, until…

You're going to make him blind, Aina!

Okay, I really thought to myself: Oh my, this is Gundam! (I had seen a naked Frau Bow taking a shower in the orignal series but that’s it)

It's hard not to imagine the siscon subtext in the show, to be quite honest.

And then the mist covers everything. The evils of war are pushed aside for the moment, to be confronted seriously later. 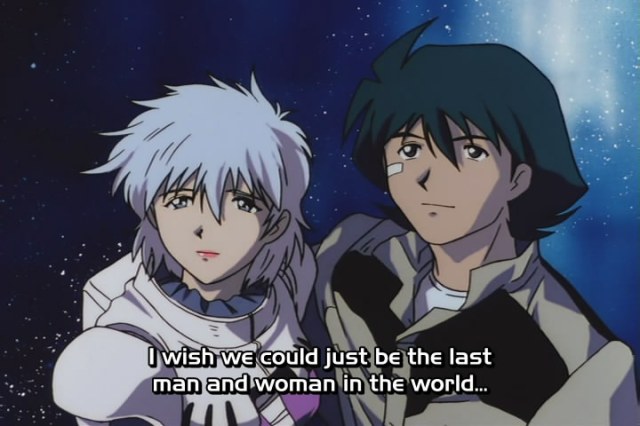 And then, Aina’s rescuers arrive – to be met by the 08th MS Team search party. A battle inevitably ensues, and both Shiro and Aina are confronted by how fleeting their moment truly is.

And then the changes in Shiro begin to manifest.

Of course you're not going to take that on your back, commander. 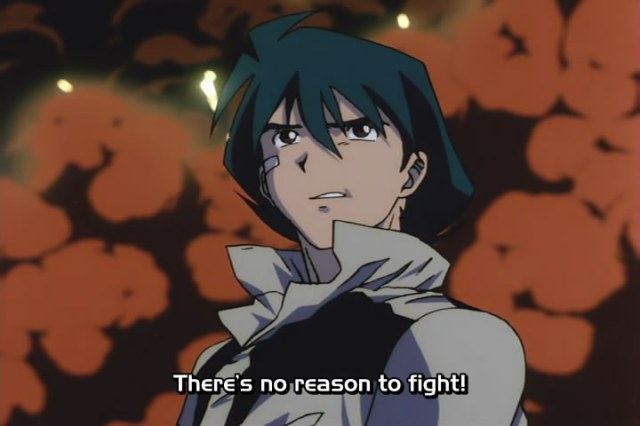 And there you have it: a fully-formed pacifist.

Shiro would spend the rest of his career preventing further hostilities between the Federation and the Zeon, something his own team and his superiors get quite disturbed about. But yes, the power of love and Aina really turned this man (yes, he is. He attacked a Zaku II Prototype with a Ball)  into a daring pacifist. If you’ve never seen a Gundam show before, The 08th MS Team isn’t a bad show to start with at all. And if you’re a Gundam fan and you haven’t seen this, you simply must see it. I may seem to make light of it in this post, but this OVA is very very good.

I entered the anime blogging sphere as a lurker around Spring 2008. We Remember Love is my first anime blog. Click here if this is your first time to visit WRL.
View all posts by ghostlightning →
This entry was posted in fanboy, Gundam, moments in anime, Valentine's Day and tagged 08th ms team, aina sahalin, gundam, shiro amada. Bookmark the permalink.

24 Responses to Aina Sahalin: The Vagina of Peace