Posted on April 7, 2009 by ghostlightning 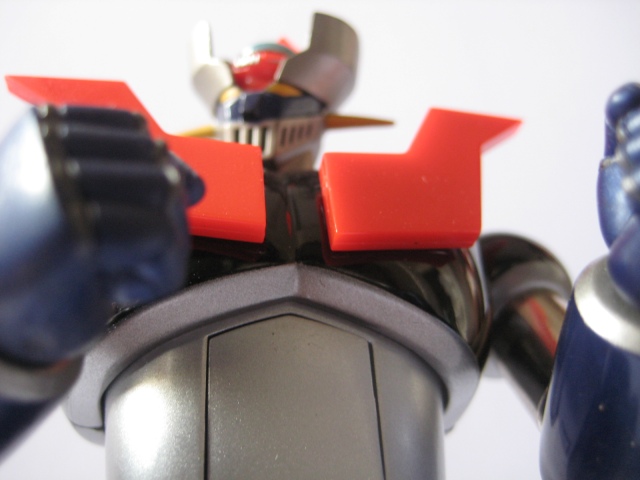 Mazinger Z (1974)was one of the first anime I ever saw. It was so long ago (maybe 1979-1980 thereabouts) that I hardly remember anything from it. What I recall about the original anime are from what I read online, and what was hinted at by the Mazinkaiser OVA (2002).  So while there is some nostalgia involved in my eager anticipation of Shin Mazinger Z Shougeki Hen, a lot of the eagerness of the anticipation is due to authentic curiosity as to what the story really is.

However, after watching the premier episode, I didn’t see the Mazinger Z of old so much as I got to see an awesomeness of another kind. Nearly everything about the first episode reminded me of what was remarkable about the Giant Robo: The Day the Earth Stood Still OVA (1992-1998), which shouldn’t be that surprising because both are directed by Imagawa Yasuhiro, who also directed Mobile Fighter G Gundam (1994).

The Giant Robo OVA, is up there with Tengen Toppa Gurren Lagann as one of the best super robot anime experiences one can have and only at 7 eps. The thing that distinguishes Giant Robo I believe is that the absurdities and the over the top ridiculousness are never played for laughs. The awesomeness is delivered straight, tongues never ever in any cheeks (except maybe for the occasional slapstick relief, but none come to mind).

This means we will see a whole lot of humans fighting, as opposed to just the super robots. As with Giant Robo,

Most of the “Experts” featured in “The Day the Earth Stood Still” come from Yokoyama’s manga adaptations of Outlaws of the Marsh and Romance of the Three Kingdoms,[26] both wuxia novels and half of the “Four Classics” of Chinese literature. Wuxia are martial arts adventures populated by skilled, honorable fighters.[27] In Hong Kong action cinema, the genre is associated with swordplay epics sprinkled with mysticism.

Given their origin, the heroes and villains of Giant Robo are superhuman combatants who share many elements with the errant knights of wuxia like strength, magic powers and the ability to fly.[17] In wuxia adventures, the characters are given nicknames that allude to their mastery of weapons, their physical appearance or their demeanor (Crouching Tiger, Hidden Dragon). Imagawa, inspired by Yokayama’s adaptation of Outlaws of the Marsh,[28] followed this convention and gave Giant Robo’s characters similar descriptive names like “Shockwave Alberto,” “Silent Chūjō” and “The Immortal.” [from Wikipeda]

The rogues gallery¹ of Shin Mazinger apparently proves this, not only with their bizarre appearance and styling, but also their fighting prowess. I don’t remember a whole deal of humans fighting in Mazinger Z, even less of human armies (swordsmen and cavalry!²), but there’s a delightful amount of it in Giant Robo, and since I’m not a purist of either (original creator) Go Nagai or Imagawa Yasuhiro this is all good news. 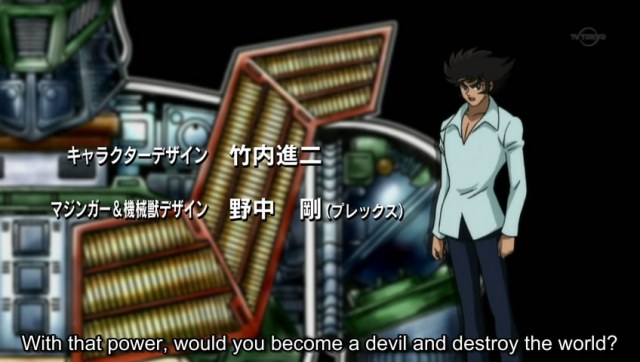 However, since Imagawa’s Giant Robo was for the most part a character-driven drama as opposed to being an all-out mecha smackdow, there may be some reservation for his treatment of Mazinger Z. Kabuto Kouji and the rest were neither layered nor nuanced. They are as ‘cartoony’ and as simple as they come, and is part of their charm for the nostalgic viewer. However, nuance and layering could be a good thing given Imagawa’s success with Giant Robo’s cast.

Having said that, Giant Robo and now Shin Mazinger Z has a huge cast. Not many will be given the kind of attention that viewers who have a thing for ‘character development.’ Paul van Oberstein, one of the heroes in Legend of the Galactic Heroes is frighteningly and awesomely consistent for over 100 episodes (follow the link but heed the spoiler warning when it appears). There are two things to consider then:

1. Giant Robo OVA had only 7 episodes, and did portray good characterization for the characters who are most important to the main story. However, most of the fighting is done by the human characters: the Experts of Justice (I can’t come up with a cooler name, my goodness) vs. Big Fire.

2. Shin Mazinger Z Hen has 26 episodes, which can mean that more attention to a larger subset of characters can be made. Also, even if a good deal of these super humans do the fighting, sufficient rocket punch action will happen.

I’m quite optimistic. I’m approaching the halfway mark of Imagawa’s G Gundam, thinking that I’ll enjoy it more having seen more of the Universal Century shows in the franchise. But I did enjoy the episodes that I did see a good deal, so I’m counting on him doing an even better job with Mazinger.

What I’m expecting to see are scenes that really move me. It’s somewhat silly to expect this from a super robot show, but time and again I’ve witnessed scenes that drove me to /m/anly tears – mostly from hot-blooded emotional speeches leading to a launch, whether an attack or just a powerful sortie filled with righteous hope and fury, and the possibility of victory. Tengen Toppa Gurren Lagann gave me one or two, Gao Gai Gar and Gunbuster too. Giant Robo has more than a few, but perhaps there’s one in the final episode that can move me even without having to immerse myself in its context: a boy urging his robotic friend to fight. 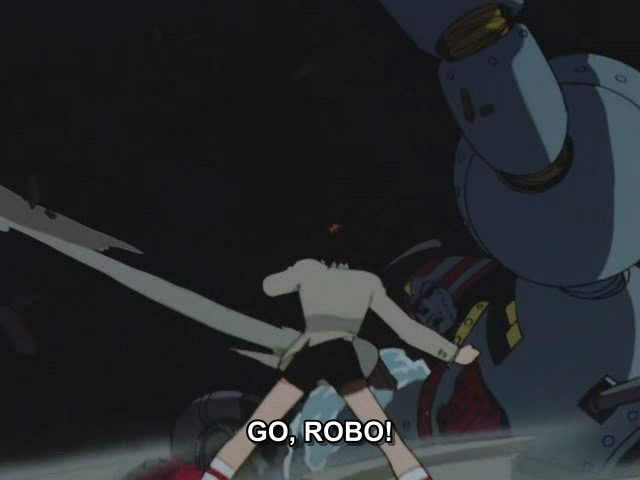 While doing research for this post I must have watched this short sequence a dozen times.

One thing I won’t comment on too much is the plot. To be fully truthful, I don’t really care. There’s probably a whole lot of conspiracy going on, involving shady societies and factions trying to gain access to mythical powers and what not. The first epsiode was in medias res (though perhaps closer to the end of things like how Gurren Lagann did) but so much – SO DAMN MUCH was going on that I was left confused³. All that’s important to me is that at the end of the day I can tell who the bad guy is (if your name is Dr. Hell, I have a good hunch it’s you).

So as first impressions go, Imagawa has left his distinct mark on Nagai’s pioneering creation. But as if to remind everyone that Mazinger Z is definitely Nagai’s legacy (for better or worse) Imagawa left us with this very Nagai image, GOGOGO!

² Imagawa apparently likes his battles anachronistic, and I think I like it. See the Ashura Corps., and the Kurogane Mob.

I entered the anime blogging sphere as a lurker around Spring 2008. We Remember Love is my first anime blog. Click here if this is your first time to visit WRL.
View all posts by ghostlightning →
This entry was posted in comparative, fanboy, first impressions, Mazinger Z and tagged giant robo, shin mazinger z hen. Bookmark the permalink.