[Some spoilers up to episode 33 of Eureka SeveN, and a whole bunch of spoilers from Gundam’s Universal Century timeline (Mobile Suit Gundam & Mobile Suite Zeta Gundam)].

As of this writing I find myself impressed to a ridiculous degree with Eureka SeveN. I feel that it is a show that expresses my idea of  ‘remembering love’ so powerfully, so sure-surefooted, and I can’t help but imagine that it was made just for me (yes I know this is delusional, but… yeah I’m delusional). A delusion like this begets other delusions. But I present here a delusion in the spirit of fun and remembering love. Here I talk about how Holland is an awesome play on two important characters in the Gundam pantheon.

The Gekko-Go is itself a very loud shout out to Mobile Suit Gundam’s White Base, robot anime’s first(?) ship on the run. There are many elements in the Gekko-Go that reference Gundam, from the irregular crew all the way to the orphaned children. Let us focus on Holland’s role as the captain. You won’t find much similarities in background or demeanor between the two captains, save their youth and the fact that they both had to fight boarding maneuvers (Ramba Ral’s siege, and Charles Beams’ one-man attack). The significant reference to Bright is for his legendary slap against the series protagonist Amuro Ray (who in turn is referenced quite heavily by Eureka SeveN’s Renton Thurston).

Amuro was acting like a whiny teenager,  right when Bright judged that he needed to grow up real quick given that he was at the time the onlyone who can pilot the Gundam. He slapped him good, after which Amuro remarked “Not even my own father hit me!” which only provoked Bright to smack him again (backhanded too). Part of what makes this moment legendary is how a lot of times the lead protagonists in anime are such annoying teenagers, and the physical abuse they are subjected to by righteous/rightful authority figures within the show provide a high degree of gratification for the viewer.

Bright Noa would be so successful as a captain of the White Base that he remained the commanding officer of all the lead capital ships in the Universal Century sequels (Z, ZZ, Char’s Counterattack); the fans have given him the title, “The Eternal Captain.”

Holland is like Bright in that he did hit Renton. He is not Bright in that he beat the living shit out of him. Furthermore, his behavior and motivation for kicking the crap out of Renton is nowhere near as righteous. He is beyond intolerant of Renton, he is jealous, insecure, and terribly immature about all of it. He’d beat Renton time and again in front of the whole bridge crew. It was painful to watch, a powerful subversion of the gratifying Bright Slap. This is also why I think it’s an exemplary way to ‘remember love.’ Eureka SeveN does more than merely reference. It builds on it and makes it its own. Holland is far more than a mere Bright clone, which is ny far a better way to honor the Eternal Captain than to simply ape his ‘greatest hits.’

I had mentioned Holland’s motivations. A big part of it has to do with the main storyline of Eureka being a mysterious key to the resolution of the conflict between the Human and Coralian species. Part of the resolution is that she requires a partner, a being that will make her grow — more human. Holland saw himself as this partner, despite the growing and accumulating  evidence to the contrary. Eureka didn’t choose him, it was quickly becoming obvious that Renton would be chosen. This sets up the second and even more interesting reference.

In Mobile Suit Gundam, a love triangle came about: Char Aznable x Lalah Sune x Amuro Ray. All three are becoming aware of being ‘Newtypes’ — beings that have psychic powers brought about by evolution due to living in space. Lalah is particularly powerful, and Char has taken it upon himself to care for her and oversee her development as a powerful soldier of Zeon.

Very similarly, Holland has taken the role of protector and um, developmental coach for Eureka¹ — who has proven to be very skilled at reffing and piloting. She is also the only one, until Renton arrived, who could pilot the mysterious Nirvash Type Zero mecha. Admittedly the mecha is more a reference to the RX-78-2 Gundam than the MAN-08 Elmeth (Lalah’s mecha), but in both the Nirvash and the Elmeth, these mecha are best suited for their respective pilots. In Eureka SeveN, the triangle became Holland x Eureka x Renton. Renton’s arrival brought the worst out of Holland.

What’s the worst? Talho has accused him of running away from his responsibility of resolving or preventing the upcoming conflict between humans and Coralians. Renton’s arrival made it possible to make significant progress, but Holland did not see it this way. Rather he threw lots of fits, kept on indulging his counter-culture activities and sustained the Gekko State lifestyle by taking on perhaps morally unsavory missions as mercenaries. As mentioned above, he beat up on Renton mercilessly, which led to Renton running away and Eureka to go find him (culminating in one of my most favorite awesome moments in animation). Eureka went find Renton so late because Holland lied to her incessantly about his absence.  He was their leader, and he behaved as one of the most immature members of their crew.

Running away from responsibility, knowing that he had a big job to do, something that he knows he is the best person for; something part of his personal history; something that he truly cares for but instead avoids, choosing to remain an anonymous pilot in the midst of a conflict growing in complexity — this is Char Aznable as Quattro Bajeena in Mobile Suit Zeta Gundam. While remaining the cool and detached soldier for the first half of the story, allowing for excellent exchanges with his former rivals turned allies Bright Noa and Amuro Ray, as well as being a mature guide for Kamille Bidan, Char lost it when (former lover?) Haman Karn burst into the scene. His uncharacteristic loss of composure resulted in the breakdown of relations between the AEUG and Axis-Zeon.

Holland did not play the antagonist the same way Char did, but it is also important to note that while a member of the Special Operative/Operations Forces (SOF), Holland was basically an elite pilot of what would be an oppressive force/regime much like Char was as an officer of Zeon during the One Year War. The difference here is that Holland is a reluctant oppressor, or at least he refused to continue being one after having a big change of heart when he met the monk Norbu. Char, while not an evil person dispositionally, was on a revenge mission against the ruling Zabi family for the murder of his own father Zeon Zun Deikum (as he believes them to be responsible) and he was not above underhanded methods to exact them.

Both characters are superb pilots. Char’s trademark is that his mecha are always painted red (save for the MSN-02 Zeong and the golden MSN-00100 Hyaku Shiki) and customized, and is believed to be three times as fast compared to mass production units. 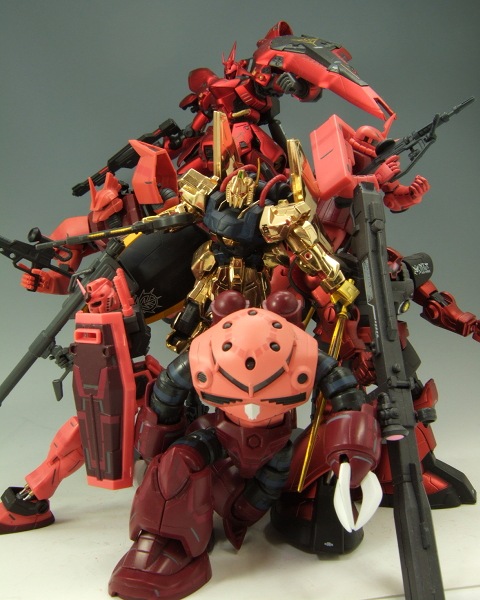 Holland’s Terminus TypeR909 isn’t exactly red, but is close enough (pink). There is no indication however, that it is three times as fast than mass production units thought it does seem that it performs better than them even if Holland is an ace pilot.

Like Quattro, Holland does man up. He owns up to his less than exemplary behavior and apologizes to both Renton and Eureka. When the stakes got higher and require a commitment to risk personal safety, he disbanded the Gekko State and would welcome only pure volunteers. His leadership in this moment was rewarded by full registration of the entire crew. Their faith in him is complete. The rascally bum becomes the leader. Moments of awesome are within his horizon. I believe Holland Novak, as written and conceptualized in Eureka SeveN honors the Gundam franchise and its iconic characters Bright Noa and Char Aznable. Making anime is such an awesome way to remember love.

¹Beyond the Gundam reference, Eureka and importantly Anemone, I read to be excellent plays on Neon Genesis Evangelion’s Rei Ayanami and Soryu Asuka Langley. Even Dewey Novak can be read as a play on Ikari Gendo. These I will explore in a future post.

Furthermore, Holland’s character is fleshed out even further in the respective stories of Dewey, as well as Charles and Ray Beams. The Beams I will write about in a future post (another example of excellent play on Gundam stories).

If you think slapping happens a lot in Mobile Suit Gundam [->]

Wait until you get to Mobile Suit Zeta Gundam [->]

I entered the anime blogging sphere as a lurker around Spring 2008. We Remember Love is my first anime blog. Click here if this is your first time to visit WRL.
View all posts by ghostlightning →
This entry was posted in comparative, Eureka SeveN, fanboy, Gundam, showing a bit of character and tagged eureka 7, gundam, zeta gundam. Bookmark the permalink.