Posted on July 6, 2009 by ghostlightning

Recently I’ve had conversations and have read random articles noting the trend of referencing anime, and how the value of these works are not necessarily correct relative to their acclaim and/or popularity (e.g. Lucky Star, Kannagi). Against a universal measure or standard, I can sympathize with ‘correcting’ the assessment of the value of these shows, but on the whole I like them a lot, Lucky Star in particular precisely because of the light-hearted referencing of anime, manga, and other otaku cultural products. Tengen Toppa Gurren Lagann is another highly acclaimed and very popular title that indulges heavily in referencing and homage. Very few (if any at all) complain about TTGL’s referential behavior, I do however believe that it is exceeded by far by another work.

Tengen Toppa Gurren Lagann is full to bursting with homages. There’s a reason why people have said that the show parallels trends in the mecha genre:

This is all good, and I do think that these visual and perhaps superficial references are the loving touches that make them entertaining and/or significant. But yes, there’s more. In a previous post I’ve attempted to demonstrate how Eureka SeveN is an excellent demonstration of love remembered for Mobile Suit Gundam through it’s character Holland Novak as a play on iconic Gundam characters Bright Noa and Char Aznable/Quattro Bajeena. Here I will highlight a different homage, a personal favorite due to the strong opinions I’ve had both positive and negative for the referenced material.

Amuro runs away, Renton runs away. From my earliest articles on Gundam I’ve written about Amuro’s flight from the White Base as one of the more deplorable actions done by a lead character.

I was particularly upset with Amuro in this arc. I do believe that his running away was an atrocious act. Not only did he desert in the desert, he stole the Gundam and buried it in a hole. He had no plan and didn’t even know where he was headed. He didn’t even bring provisions! Conveniently for the plot the town of Sodon was near enough to walk to which set up the meeting between Amuro and Ramba (and Lady Hamon) in a small saloon. LOLTOMINO plot convenience.

Amuro runs away primarily because he overheard Bright and Mirai discuss the pitfalls in highlightning how Amuro is the only person who can pilot the Gundam. Amuro takes this as a betrayal and runs away, taking the Gundam with him. Eureka SeveN thankfully chose different motivations/reasons for Renton to leave. It’s important to note too that Renton is the only person who can pilot the Nirvash with Eureka (or even without her, which is significant); even more importantly, Renton is treated far, far worse in the Gekko-go compared to Amuro in the White Base. Renton is hazed and picked on from all fronts, trolled and bullied even by his own sympathizers.

Renton left due to an amalgamation of the following events and his resulting emotions: 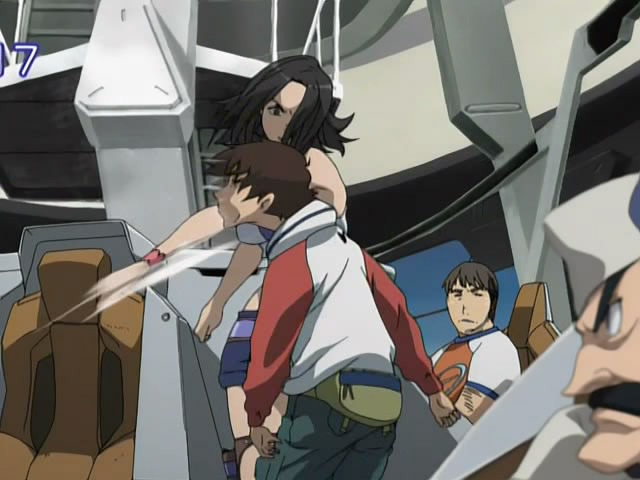 I’m not suggesting that Renton is a superior character than Amuro, only that he is a more nuanced and developed character than Amuro within a context of a 50 episode anime. Amuro will undergo a lot of growing up and do a lot of awesome things in the sequels (Mobile Suit Zeta Gundam, and Char’s Counterattack), which is not to say that Amuro doesn’t kick ass in Mobile Suit Gundam.

I could go on and on and profile the distinctions and nuances of the primary players in the respective anime arcs of these shows, but at this point I will submit a summary of the references and some of my impressions.

Part of what I love about Gundam is that its stories are such fertile ground to grow other stories from. The Beams’ story arc in Eureka SeveN is one of my favorites and elements such as Eureka being the cause of Ray’s inability to conceive and that being such a big deal for the Beams add a powerful layer of tragedy to the story. Even more, how they treated Renton as a son with such heartbreaking compassion, understanding, and maturity really tore me up. Even to the very end, when the Beams let Renton go and make the choices of a man, and yet love him to their deaths… these things will never leave me. Contrast this with how wretchedly Holland treated him up to that point (and a little further beyond) and you have even more pathos.

Mobile Suit Gundam had some of this too, with Sayla Mass growing up with Ramba Ral’s family and he getting shot trying to call out to her, which led to his eventual death. So Eureka SeveN had to do much more than copy the elements. The characters they introduced are far more sympathetic (to me at least), and were allowed to behave in very fallible ways (without tarnishing their charm). Their portrayal allowed far-reaching characterization that set up the tragedy quite beautifully. I didn’t care much for the Ramba Ral arc save for Ramba being of a class of manly soldier seldom seen in contemporary anime. Eureka SeveN made me remember Gundam with more fondness, made me appreciate Ramba and Lady Hamon and their place in the Gundam mythology.

I’m very fond of the idea of newer works serving as an entry point to discovering older creators and works, an entire genre, or even an entire medium. Outside of anime we have video games such as Rock Band, and Guitar Hero who introduce ‘classic’ rock to a new generation of fans; related to this is how many mecha fans are familiar with a large number of robots, and a fair bit of their backgrounds and stories without actually having seen them yet through the Super Robot Wars franchise of video games. These games make the older works accessible. I think shows like Eureka SeveN, and Tengen Toppa Gurren Lagann can be used awesomely as introductions to mecha anime in general. The love is strong in these shows.

Remembering love as an appreciation methodology [1] [2]

I entered the anime blogging sphere as a lurker around Spring 2008. We Remember Love is my first anime blog. Click here if this is your first time to visit WRL.
View all posts by ghostlightning →
This entry was posted in analysis, comparative, Eureka SeveN, fanboy, Gundam and tagged eureka 7, gundam, Mobile Suit Gundam, Tengen Toppa Gurren Lagann. Bookmark the permalink.