I Fail at Bakemonogatari (epiphanies after watching episode 4) 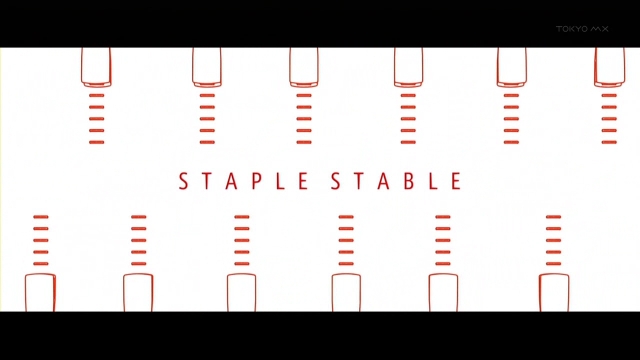 I must be getting duller in my old age (32, which is like 8 in ghostlightning years). I was scratching my head a lot trying to keep up with the blistering pace of ideas bouncing around while watching Bakemonogatari, and one of these ideas relates to the concept and/or aesthetics of the ghosts (or monsters, which I prefer).

Last week I was chatting with coburn who, like me wanted to make sense of (to start with), the special abilities of the monsters (i.e. Senjougahara with her stationery and staplers). All I could tell him was that it seemed like pure conceit on the part of the show. I don’t hold this against it, but coburn wasn’t satisfied and I sort of was content with what I thought was a clever response.

No. Not clever at all, just safe.

This is not to say that the whole thing isn’t a conceit, but rather there’s more to it than just slapping on some edgy randomness and passing it off as cool. It took me four episodes, but I think I’m on to something.

If episode three, Mayoi Snail Part 1 had a misleading title because half of the episode was dominated by Senjougahara; this episode leaves no doubt by virtue of  having an OP all unto herself, and by that I mean while there’s more than one character in it (there are many), they are all Mayoi. Nothing sends a clearer signal that the episode is all about you than having the OP where all the characters are you. Nothing.

So the OP had this interesting looking snail.

And the title of the episode is Mayoi Snail Part 2. Let’s look at that snail closer:

Now I take note of our loli’s backpack, which, is not only hueg (as it seems to carry everything she needs to survive) but she also never takes it off. That backpack has so much going on it can have its own show.

I put these together and conject that the totem animal, the confronting spirit, that thing that makes this show a story of monsters is represented by the design or appearance of the afflicted character. Yes, that’s it. That’s my big epiphany. Don’t be too harsh, I’ m rather new to Nioshin and Shinbo, and I just take these things as I see them. Did I mention I’m old? 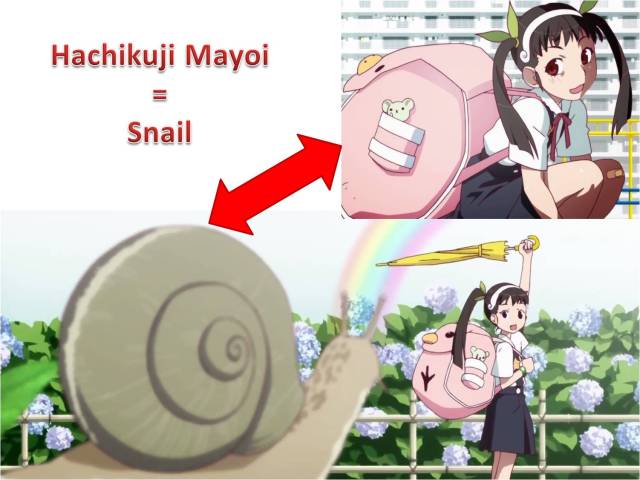 Now that I’ve dealt with the obvious, the case of Senjougahara becomes obvious as well. The perplexing thing for me was the whole deal about the staplers and stationery. I worked it out (for viewers using a feed reader, visit the post to view the ff slideshow):

Pardon my indulgent celebration of a dubious triumph. I really really felt good about figuring this out. Now I’m intrigued about Araragi Koyomi and Ms. Class Rep herself. I don’t really know if they’re still monsters (in Araragi’s case, being an ex-vampire) but I think the bloody OP-like montage in episode one suggests that Hanekawa Tsubasa is as well (or at least during Araragi’s monologue introducing her I noticed a sillhouette of a cat girl, or I think I did).

For those who are sharper than I am, what are their totems/ghost/spirit/monster forms if any? Were any clues given that I totally missed?

For a ‘proper’ breakdown of episode four I refer you to Hanners if you haven’t read his post already, who says that it is arguably the weakest of the episodes thus far (Hanners 2009/07/25)

Shinbo is said to purposefully overload viewers with information and detail, so I really think I will miss a lot of interesting things going on (annotated discussion c/o of lelangir 2009/07/21)

I entered the anime blogging sphere as a lurker around Spring 2008. We Remember Love is my first anime blog. Click here if this is your first time to visit WRL.
View all posts by ghostlightning →
This entry was posted in analysis, Bakemonogatari and tagged bakemonogatari. Bookmark the permalink.