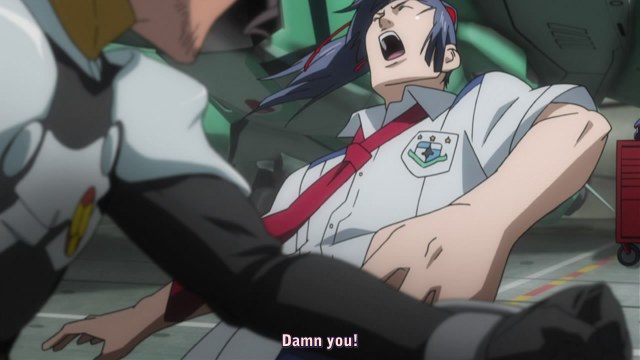 There are two kinds of dialogue that I consider excellent, and while some shows may only have one of each, both add considerable value to the experience of watching them. These are:

For the purposes of this discussion, I mean dialogue simply as the words in the script (not strictly distinguishing exchanges between two or more characters). In this post I’ll look at two episode threes as examples: Macross Frontier, and Bakemonogatari.

Dialogue that is about something

I’ll start with Bakemonogatari’s ‘Mayoi Snail 1.’  Let me recapitulate an exchange I took note of in my post on the episode:

I bring your attention to this particular exchange near the beginning of the episode. Araragi was moping around in this rather awesome playground and Senjougahara found him, and ‘allowed’ him to see her.

S: I wanted you to see these clothes first if possible, Araragi-kun.

A: Hey, if you wanted to show them to me first…

Well, uh, that makes it sound like a stroke of luck or an honor.

S: I didn’t want to show you them, Araragi-kun.

I wanted you to see them.

The nuance is completely different.

Is it really? Perhaps we can say that Senjougahara ‘allowed’ Araragi to see her new clothes, as opposed to ‘show’ them.

The proposed probable nuance lies in the power relations. [Read the full post ->] 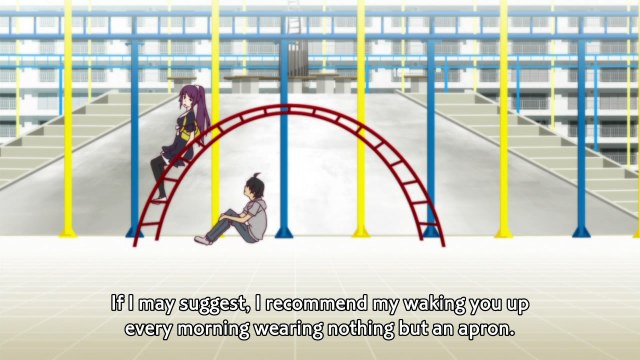 The show has the kind of looseness (despite what still seems to be a linear structure) that allows for such adventures in dialogue. In the same conversation Senjougahara will riff on male desires and fetishes, allowing the show itself to give commentary on such and provide a meta-enjoyment of the show, if it didn’t quite break down the 4th wall. Here’s a gem:

I mean, the only kind of girl who would talk to an unappealing virgin like you are late-bloomer crazy virgins like me!

This line more than satisfies the criterion I described: it’s capricious, and adds oodles of character to not only to Senjougahara but Araragi as well. It is both descriptive and dismissive, and even justifies the exposition to a degree, if not moving the plot forward itself. Killer line is deadly. Sorrow-kun in his post on great dialogue notes that Senjougahara believably delivers this. I agree, and this is so because she has been talking this way for the first two episodes and enough precedent has been laid down (though this is not to say that an actual 18-year old would speak this way, and can be characterized as a late-bloomer virgin). 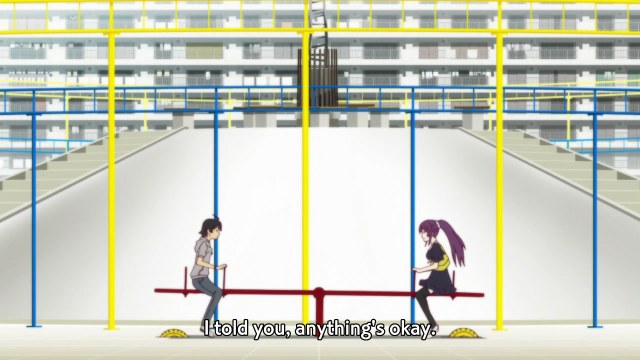 But here’s the prize winner in my book, and I don’t think it’s easy to notice at all. In the same conversation, it’s revealed that Senjougahara lives in the area where the park they’re at is.

A: How about you Senjougahara, do you come here often?

S: This used to be my place.

A: “Your place?” That’s right, you said you used to live around here.

S: Well, yes. But then it all changed. It’s not like I’m too sentimental about it, but… For some reason, seeing how where I used to live has changed makes my motivation slip away.

A: Isn’t it unavoidable?

What is the show saying here? It’s saying change is inevitable; it’s a rather subtle way to underscore a theme of a show about monsters that hijack one’s personal growth and finding one’s way to be free of them. The monsters are past events that people (the characters) make to mean something about themselves with negative consequences. To be free of them is to move forward. But then, sometimes we don’t want to change, or don’t want things to change. Adolescence is like that too. That’s why I value this easy to overlook piece of dialogue, it is about something.

Outside of anime, I can think of the film Pulp Fiction, Film critic Roger Ebert puts it well:

Dialogue drives Quentin Tarantino‘s “Pulp Fiction”_dialogue of such high quality it deserves comparison with other masters of spare, hard-boiled prose, from Raymond Chandler to Elmore Leonard. Like them, QT finds a way to make the words humorous without ever seeming to ask for a laugh. Like them, he combines utilitarian prose with flights of rough poetry and wicked fancy.

Consider a little scene not often mentioned in discussions of the film. The prizefighter Butch (Bruce Willis) has just killed a man in the ring. He returns to the motel room occupied by his girlfriend Fabienne (Maria de Medeiros). She says she’s been looking in the mirror and she wants a pot belly. “You have one,” he says, snuggling closer. “If I had one,” she says, “I would wear a T-shirt two sizes too small, to accentuate it.” A little later she observes, “It’s unfortunate what we find pleasing to the touch and pleasing to the eye are seldom the same.” [emphasis by ghostlightning]

[…]In a lesser movie, the dialogue in this scene would have been entirely plot-driven; Butch would have explained to Fabienne what he, she and we already knew. Instead, Tarantino uses an apparently irrelevant conversation to quickly establish her personality and their relationship. His dialogue is always load-bearing.

Ebert goes on to say that this is brilliant dialogue. I agree, when he says: it is about something.

An overlooked opus of exposition

‘On Your Marks’ is chock-full of world building and plot progression. We see the love triangle’s three points align, and the nature of the relationships flesh out:

This was established through the chance meeting that began with Sheryl and Ranka in the previous episode and continued in their adventure while trapped in an emergency shelter while the SMS fought Vajra within the vicinity. Ozma Lee, the leader of the squadron was injured; being the guardian of Ranka who lied to her about his continued pilot duty resulted in Ranka blacking out. It is also revealed in the episode that Ranka has dissociative amnesia and does not remember anything beyond her time with Ozma that began a few years ago. 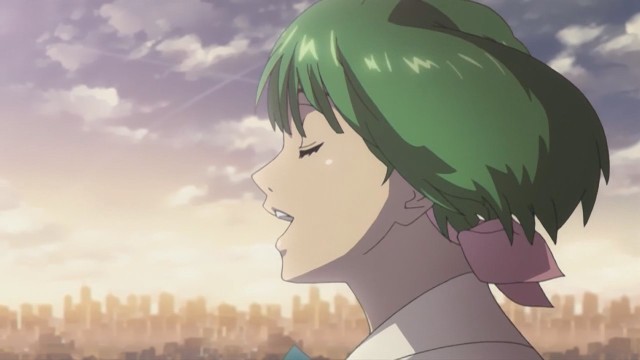 Later in the episode Ranka recovers, and while Alto wanders around sorting his emotions regarding joining SMS to become a fighter pilot he finds Ranka in the cemetery grounds singing to herself.

R: Sometimes, I come here to sing. Nobody’s here to listen, so…

A: Nobody to listen Is that alright with you?

R: Yeah. I used to think that way… Sheryl-san’s beautiful, isn’t she? I’m so jealous. I was really scared when we were trapped in there. I thought I might die without being able to do anything. Without anyone knowing I died. And then I thought, if I could tell as many people as I could that I was there… I thought that was why…

A: That’s not possible.

A: As long as you keep thinking someone like you can’t do anything, Then you’ll never be able to!

R: I want to tell everybody! Will you listen to my song?

The dialogue is decidedly pedestrian compared to the above examples, but they set up the next sequence, where the show really puts together something powerful. I noted in the previous episode’s post [->] how Frontier uses characters breaking into song as a set-piece exposition|narrative progression device. In this case, the song ‘Aimo’ is sung by Ranka for the first time, with Alto as her audience. This performance serves to score two simultaneous and contrasted funeral ceremonies.

It is twilight, and the fallen pilots of the NUNS Mililtary are being sent off with a gun salute. We are given a view from a distance, which then shifts to a building that somewhat resembles a crematorium. Inside, the non-funeral ceremony for the fallen SMS pilot Henry Gilliam (killed by Vajra in the first episode) is being held. As Ranka sings ‘Aimo’ in the distance (that we have no problem hearing, serving as a requiem for Gilliam), Capt. Jeffrey Wilder delivers the eulogy:

He was a brave soldier. A man who feared nothing, never hesitated, and fought with all his might, sacrificing his life for what was precious to him.

But this is not the end. One day, his mortal shell will become our own flesh and blood, fueling our burning lives.

So for now, rest in peace. Farewell. Let us meet again.

Gilliam’s body, in some kind of casket is plunged into a liquid solution. We can infer from Wilder’s words how (part of) the biological system in the Frontier colony works — a total commitment to recycling biomass. To find out about this aspect of worldbuilding (ecology is a theme in Kawamori Shoji works) through a powerful scene like this exemplifies the kind of dialogue that serves narrative exposition excellently. 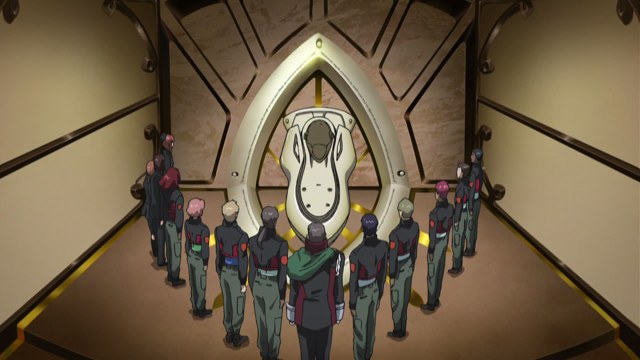 But why two separate funerals? What is so different about the SMS? It seems that their pilots are more competent, and they have better ordnance than the NUNS military. After Gilliam’s service Alto was waiting for Ozma right outside, resolved to join them after hearing Ranka sing, following his prodding. Ozma gives him disclaimers:

O: As Civilian Military Providers, we don’t officially die in battles. We die in accidents. We will never be remembered with a headstone, and we will never have a ceremonial gun salute. Our families will never know the truth about our deaths.

A: That’s convenient for me. I live by my own strength and die by it as well. That is my resolve.

We now know the difference, and the consequences of being a civilian serving the military. This nature is relevant to Ozma’s reluctance to reveal his profession to Ranka, as it is fraught with risk and against regulations. (The SMS would still be guilty of employing minors in very hazardous work without informing parents and/or guardians, much less their consent LOLKAWAMORI?).

To use another mecha anime in contrast,  Martian Successor Nadesico relies on (almost) breaking the 4th wall with its lectures and presentations. It isn’t a knock on the show because it is a delightful homage to Gunbuster!‘s bonus science episodes, and well within the humorous tone of the series. What it lacks in elegance, it makes up with comprehensiveness. The dialogue in Frontier will not spell things out in detail. We’re to infer, to deduce, and read into the statements not so much for meaning or symbolism but rather the way the world works in the narrative, how the details play together, in the service of the story.

A survey of anime with great dialogue, Bakemonogatari is already on this list (Sorrow-kun 2009/07/27)

If awesome, manly, and GAR can be considered great dialogue, then I submit Souten Kouro and Sengoku Basara (yes, I went there) [->]

I entered the anime blogging sphere as a lurker around Spring 2008. We Remember Love is my first anime blog. Click here if this is your first time to visit WRL.
View all posts by ghostlightning →
This entry was posted in analysis, Bakemonogatari, comparative, fanboy, Macross Frontier and tagged alto saotome, araragi koyomi, bakemonogatari, macross frontier, ranka lee, senjougahara hitagi, wrlmf09. Bookmark the permalink.

29 Responses to Powerful Dialogue Sells the Show: Bakemonogatari 03 (Mayoi Snail 1) and Macross Frontier 03 (On Your Marks)