Posted on September 4, 2009 by ghostlightning 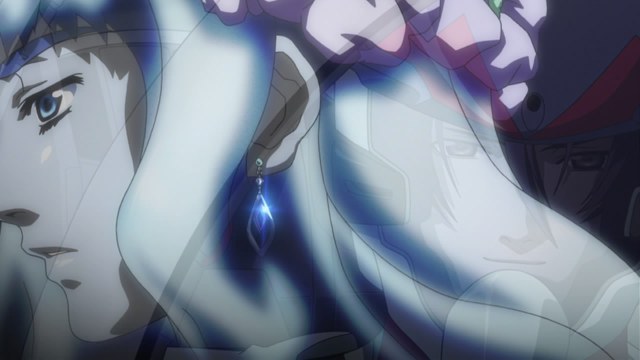 She doesn’t get to leave this episode, but delivers a farewell concert.

I’ve mentioned in my post on episode two (Hard Chase) that what the Macross Franchise does very well is to stage musical set-pieces. By this I mean there is an actual live performance while events of consequence unfold whether propelling forward, or resolving the plot(s) of the narrative. At the end of this episode is such a set-piece performance that continues in the next, that in my opinion is part of a sequence that is one of the finest moments of the franchise.

But first, several things happen that set up the Sheryl’s farewell concert.

By the end of the previous episode, it is hinted that Sheryl has begun to have an attraction in some form to Alto, coinciding with the confirmation that Ranka is clearly infatuated with him. Prior to this Ranka looked towards Alto as a source of guidance and support, even if he already saved her life and figured in some of her significant moments. Seeing Sheryl with him on an apparent date, and kissing him goodbye, triggered a jealousy that fully establishes her as a point in the love triangle.

Sheryl has had the clear advantage, having access to Alto and having spent meaningful time with him. Also she has the benefit of being Ranka’s idol. She was the ‘perfect future version of her,’ the same way Mayama Takumi saw Nomiya Takumi in Honey and Clover. Ranka’s story now begins as a challenge, working her way up the grade of celebrity. The first step being scouted, then winning the permission of her guardian to pursue her goals.

But Alto lies to her about being on a date with Sheryl, yet shows kindness and generosity by giving her a ticket to her Farewell concert, to go with him (not like in a date or so he says). The grade that Ranka climbs is a steep one. And complicated by the call for assistance by the Macross Galaxy Colony Fleet, who is under large scale attack by the Vajra — only identified as alien biomechanical weapons that seem to be controlled externally. This would mean Alto will not be able to join Ranka in Sheryl’s show.

And Alto meets Sheryl to return her lost earring, who in turn shows a little more vulnerability by speaking of her unhappy past in her home, the Galaxy colony. She asks Alto to keep her earring for luck, and their relationship seems to grow even if Alto never seems to show interest in a romance.

Finally, the concert. The set-piece is the mobilization of the SMS forces under the command of Captain Jeffrey Wilder. Even as civilians, a special law dictates that they are effectively conscripts of the NUNS military. They are in turn granted use of reaction weapons, which will be a lot more powerful against the Vajra who have shown near-imperviousness agains conventional ordnance. This whole sequence, featuring the soldiers prepping their mecha, the Macross Quarter capital ship running its checks, the individuals putting on their game-faces and psychological war-paint.

All of this happens scored initially by an orchestral piece by Kanno Yoko, then ultimately by Sheryl performing Diamond Crevasse, blending into the ED sequence itself. It is a peculiar choice for an opening number, as usually the opening numbers of concerts are high-energy songs to excite the audience. Perhaps it is fitting, given the theme of her concert being a farewell, and that it is performed under some duress — in the sense that Sheryl is from Macross Galaxy, which is currently besieged by aliens. 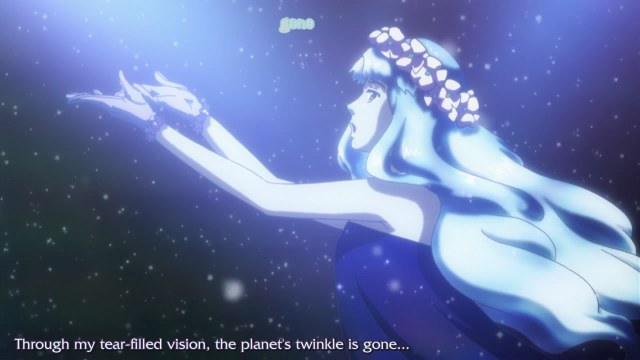 The effect is wistful and solemn. We see Ranka running to the concert, clearly unable to witness this part of the performance. The Macross Quarter departs from Macross Frontier.

I often wonder at this piece. It’s very easy to dismiss as a conceit by Kanno herself, who is allowed unprecedented influence in the direction of the show itself. Macross Frontier is unusual that it is produced more like a musical than any other anime that came before it, or at least during the career of Kanno. This means that the narrative is, at times plotted, and clearly directed around the musical content. In the process of producing anime the composition of the music, or at least the selection of musical pieces arrives near the end of the production stage. The anime is already drawn and sequenced, and sound editing then integrates the music in the show.

Here, the showcase is ‘Diamond Crevasse’ itself, and a set-piece is written around it, creating as much fit for the song as possible. Does it work? If you accept the conceit, it works brilliantly. Only in a musical will it make sense for the narrative to move forward when characters break into song. Macross Frontier is not a musical in the sense that exposition and or plot/points are not delivered by the song itself (i.e. Ranka doesn’t sing a song about her dreams to be a star, like Ariel in The Little Mermaid sang about her desire to be part of the human world). If so, it is a coincidence (i.e. Ranka sings ‘Aimo’ to Alto, which marks a turn in her resolve to pursue  a singing career, as well as introducing a song that will be significant to the narrative later on).

So it’s not a musical, but is built in a similar way. This isn’t discussed much by the writers who covered Macross Frontier, but I see this as an innovation, in an atmosphere where anime is often criticized for doing very little of such; resorting allegedly to pandering and fanservice (Frontier does these too, I only say that it cannot be reduced to merely these). I’ve read it mentioned that Kanno’s work in Frontier is her best (I’m not so sure, but I sympathize greatly with this view), but I would say that her work definitely benefited by the newfound freedom given to her by the creator Kawamori Shouji.

Steps in anime production, containing an excerpt of the interview with Kanno and Kawamori [->]

I entered the anime blogging sphere as a lurker around Spring 2008. We Remember Love is my first anime blog. Click here if this is your first time to visit WRL.
View all posts by ghostlightning →
This entry was posted in analysis, fanboy, Macross Frontier and tagged kanno yoko, macross frontier, shoji kawamori, wrlmf09. Bookmark the permalink.