Posted on September 9, 2009 by ghostlightning 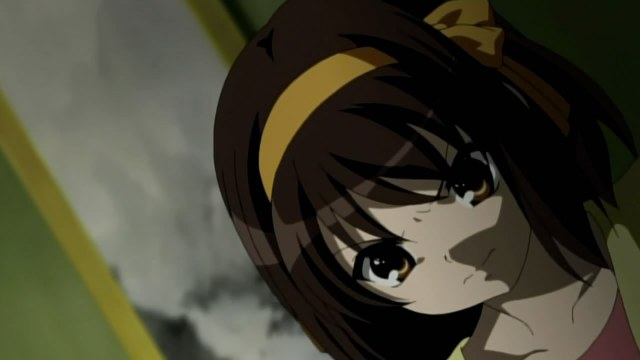 That is to say, she behaves like a teenager. Without mentioning names or sources, indulge me in accepting that many viewers have been declaring their ‘sudden’ discovery that Haruhi is a bitch, and that they hate her now. The ‘Sighs’ arc, which occurs prior to her fanboy-making-turn as a substitute lead vocalist for ENOZ during the school festival, is suddenly supposed to have turned Haruhi into a bitch all sudden.

So who were people worshipping in the first place? And yes, people worshipped her because Haruhiism exists. So people are shown what serves to be a near-past backstory and are suddenly backsliders from the religion? It is more than amusing!

So let’s talk cruelty. Cruelty is a distinct behavior marked by an indifference to suffering, and perhaps taking pleasure in inflicting/causing it. Is Haruhi indifferent to the suffering of the members of the SOS Dan? Yes, this is rather obvious. Kyon as a character device serves directly as to highlight and provide commentary on her cruel behavior. Does Haruhi take pleasure in causing suffering? 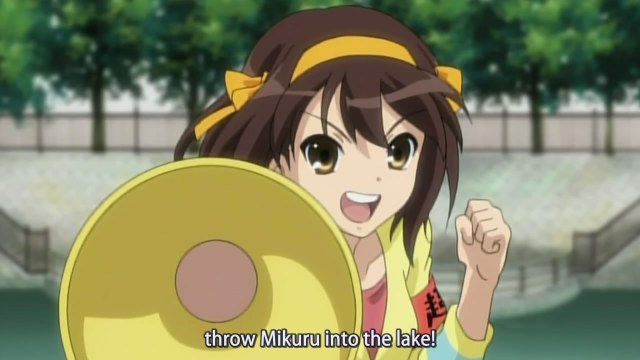 To a degree, yes. If we are to consider how she treats the computer club — she is rather cruel to them. However, I’m not entirely certain that she enjoys seeing them weep and beg, she just takes that as the wages of victory. I don’t think that there’s a level of malice present in that she thinks, “I am blackmailing the president of the computer club because I want to see him squirm.” Rather, the squirming, begging, and gnashing of teeth are merely bonuses after she got what she wanted (the computer).

Where are the viewers that despised this behavior? Where are the complaints of her being a bitch? I really think that fans thought this was charming. You thought it was funny didn’t you. If anything, you were impressed, weren’t you? You even enjoyed Asahina being groped didn’t you? Who was cruel then? Who was being indifferent to the suffering of the entire computer club? Non-fans and haters need not respond. This is not about you. 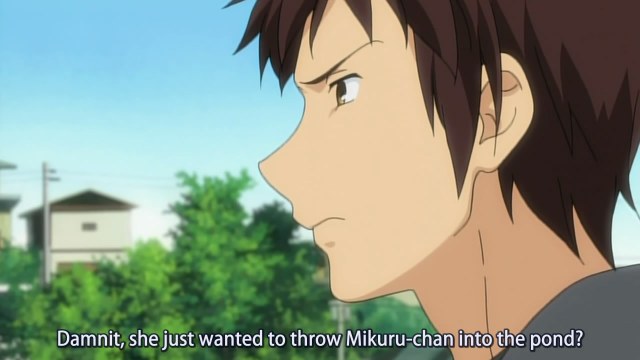 Here’s a view on the matter by my favorite commentator on this series:

She’s always been this bad.  This show is at heart a portrayal of the whimsicality of omnipotent divinities.  When a schoolchild is whimsical, that’s cute.  When the deity is whimsical, well, we’re bound to gnash our teeth or while o[u]r time drumming up justifications.  The fact is, though, Haruhi is what Haruhi is, and that’s all there is to it.

I agree on the philosophical level: Every thing just is and that’s all there is to it. But regarding the whimsicality of omnipotent divinites, I don’t know. I know of one divinity who isn’t whimsical though omnipotent.  This leads me to this analogy of fans of the show despising her after seeing the “Sighs” arc:

It’d be like a Christian’s view of god as sweet Jesus, having only read the Gospels/New Testament; then being shown the utter EPIC that is the Old Testament (not to say that “Sighs” is epic, it’s not — it’s merely very good and interesting similar to how I like Bakemonogatari‘s “Mayoi Snail” or “Suruga Monkey” arcs) and being disgusted at the rather often pissed off, jealous, vindictive, and very violent God of Judaism. 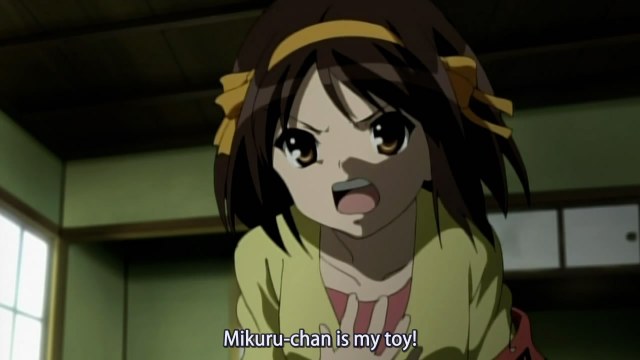 From his sanctuary God hath said,

“In triumph I shall divide Shechem
and distribute Sukkoth Valley to my people.
Gilead is mine, and Mannaseh too;
Ephraim is my helmet and Judah is my royal scepter.
But I shall use Moab as my washbowl,
and I will throw my sandals on Edom,
as a sign that I own it.”

Divine righteous ownage. For a really awesome display of that God inflicting his arbitrary will, read The Book of Job in the Old Testament. It’s awesome, disgusting, fear-inducing, cruel, and inspiring all at once. It really is a very impressive read. The physicist Einstein may or may not have said that God “doesn’t play dice with the universe.” but in the Book of Job he plays dice with a human (or rather, the die is the human himself).

Arguably, the Judeo-Christian God (JCG) is no less petulant, nor whimsical than the yellow-ribboned teenager who isn’t even aware of her own powers. But if you read the accounts, JDC is more awe-inspiring, kingly, and reverence-inducing. This I attribute to two things:

Despite the partisan/antipartisan dynamics involved in providing the accounts, we have the advantage of seeing Haruhi with a third-person perspective; that is, we see more than just what Kyon narrates. We see her whimsically and carelessly bully Mikuru, carelessly take advantage of Kyon’s indulgence (or powerlessness to disagree), and take everyone’s obedience or cooperation for granted. JCG offers salvation and forgiveness. Haruhi offers glory for those who go along with her whims (the SOS Dan), but really these are just acts of self-gratification on her part. 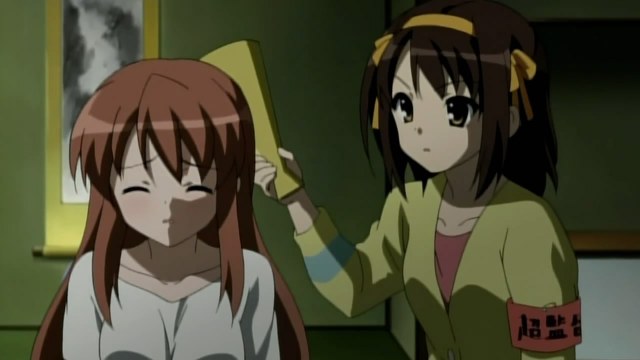 There is an offer of goodwill on the part of JCG, or at least his partisans believe so and would have everyone believe. Haruhi has no plausible value-proposition, even to her followers. Remember that the SOS-Dan is not an organization of followers; it is completely inauthentic. They are a gathering of agents of unrelated organizations cooperating to manipulate Kyon so as to observe and control Haruhi.

So relative to an eternal deity, Haruhi does act like a teenager. Even with awareness, the SOS-Dan doesn’t imagine her behaving with any maturity. They expect that the moment of Haruhi’s awareness to be the trigger of the end of all current existence. After all, the fundamental condition of Haruhi is something that afflicts all of the shows viewers: boredom. While boredom affects people of all ages, I am partial to the idea that most ‘sighs,’ and other overt expressions of boredom manifest in adolescence. 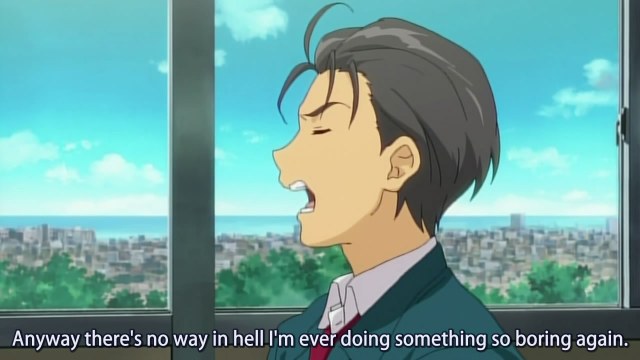 Regarding boredom, I will bore you with some Heidegger. To the philosopher Martin Heidegger, boredom is important to become ‘attuned’ to the very ‘nature of being’ (Dasein) itself. I think he’s still right, when he said “Boredom is the basic mood of our age.”

Boredom penetrates Dasein through two separate paths. Dasein can either become bored with something (such as a technological device, friend, or situation) or can be bored with (a case in which there is no object to call “boring” but only the emptiness of Dasein’s choices). In the first form of boredom, we find that this attunement is tied closely (as with anxiety) to Dasein’s experience of temporality. Boredom, simply put, is one way in which time temporalizes. When Dasein finds itself in a bored state-of-mind, this simply suggests that “time becomse long for us” (Heidegger 1995: 80). When we are in the state of becoming bored with something, we are becoming bored because the object, or situation no longer passes the time. In this case, Dasein simply looks for something else that will pass the time–or in other words, reverse the speed of temporality in a particcular case. When Dasein is bored with an object, its relation to the object is one of “holding-in-limbo” of time with the object itself “leaving us empty” (1995: 87). Heidegger gives the example of Dasein waiting for a train in a train station for three hours. In this case, Dasein is held in limbo by time and the space (the train station) leaves Dasein empty. This combination of being held in limbo and leaving-empty simply awakens the dormant feeling of boredom always already present in Dasein’s essence.

In light of McKenzie’s reading, Heidegger would probably say that Haruhi is bored with normal (as opposed to paranormal) life — it no longer passes the time well for her. In particular, she is bored with school and its set-piece tropes: clubs, P. E., and the school festival itself. Haruhi’s behavior is to take matters of boredom into her own hands, to create stimulation herself. It is interesting in that Kyon is the trigger, without him necessarily meaning to. As Itsuki says, she always believed that Kyon would support and accept her (even if he complained out loud).

The combination of arbitrariness, acute boredom, and actual physical age to me are indicators of Haruhi’s age in the context of Godly behavior. I also posit that the very manifestation of her cruelty is such an indicator, given the setting in which she operates and the choices readily available to her. It is a juvenile cruelty, even childish. I don’t imagine Haruhi willfully destroying life — see her treatment of the cicadas they caught during the summer (after thousands and thousands of iterations, she consistently released them — even if only to engender favors among them). 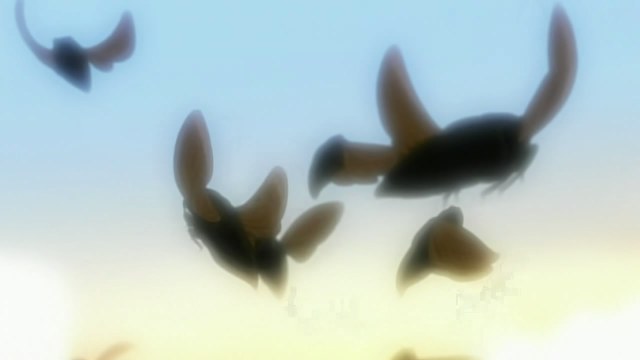 Her cruelty is limited to the thoughtlessness regarding the discomfort of others. This makes her more annoying, and less menacing — despite how menacing she did come across in ‘The Sighs of Suzumiya Haruhi IV’. That I credit to the direction and storytelling of the episode. Perhaps it isn’t even indifference, perhaps it’s just plain ignorance.

I hesitate to use other deities and religions becasue

Readers better-versed in religions are more than welcome to provide examples and counter-examples.

If you haven’t followed the first link I provided, I recommend it again. The discussion is um, EPIC (The Animanachronism 2008/03/03; no I’m not involved in it at all as I was too late to the party T_T)

An alternative to Haruhi as deity (warning: Macross faggotry) [->]

I entered the anime blogging sphere as a lurker around Spring 2008. We Remember Love is my first anime blog. Click here if this is your first time to visit WRL.
View all posts by ghostlightning →
This entry was posted in analysis and tagged suzumiya haruhi. Bookmark the permalink.

146 Responses to As Cruel Gods Go, Haruhi Shows Her Age