Posted on January 22, 2010 by ghostlightning 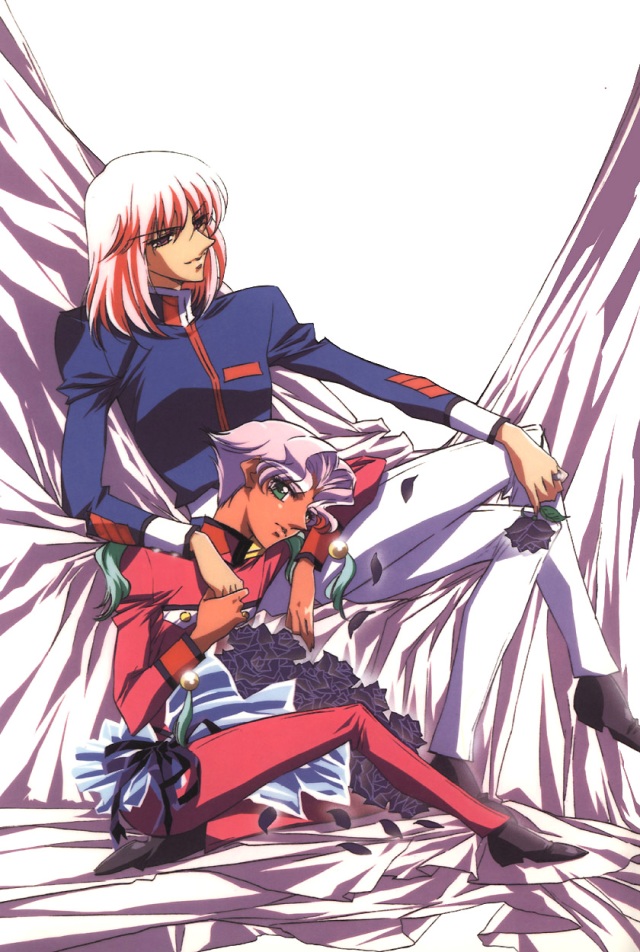 The contents of a person’s heart are veiled, as though with thin silk.You may think you can peer into it, but you can’t really. And people seldom understand…  the princes other people keep in their hearts. Still, I am a bit jealous when I see young people in love.

I struggle to make a unified essay on the arc as a whole due in part of its nature to keep me guessing in terms of who is lying and who is telling the truth. Who is really on whose side? I don’t really know, no idea anywhere in the vicinity of confidence. As such I have very little to say about Ohtori Akio, and Himemiya Anthy; despite how significant I think they are not only moving forward, but within the arc as well.

If my analysis is rather peripheral to what could be the core of this arc, then that failure is entirely my own. Well, this is not to say I have very little to say about the arc. I think it’s a cleaner, more efficient narrative than the Student Council arc. It maintains patterns even more religiously than the previous arc, and it’s very powerful too; often building on the narratives of the defeated duelists of the student council despite not making them the ‘lead’ actors in Utena’s conflicts. Except, perhaps Kiryuu Nanami who, even as the show alternately humiliates and punishes her.

Then, it justifies such ends by continuing to reveal her as petty kind of evildoer somehow became my favorite character in the series. But that’s just me (and her golden forehead).

What Changed in the Black Rose Society Arc?

I think an important change is how the duels that Utena faced never felt truly threatening. Between the Sword of Dios, Anthy’s buff/power-up effects on it mid-duel, and the ‘death from above’ possession by the still mysterious Prince, Utena’s victory in each duel was certain. Certain I tell you!

The very structure of the arc, which is predicted by the number of student council members previously defeated by Utena in the previous arc tells us that Utena was not going to lose, at least up until the final boss; and even he never felt like he truly threatened Utena in their duel (the way the Student Council members variably did, and especially Toga who actually beat Utena).

While I was pondering this futility of how the different ‘possessed’ duelists dashed themselves upon the fortifications of God-mode Utena, I was already problematizing how ‘unexciting’ these duels are since the ends were never in doubt… Only that they were actually very exciting anyway, and that the result of the duel in terms of victory and loss never became the point.

I only fully realized this on episode 21 when Keiko was fighting using Toga’s sword… For the first time, killing the Rose Bride wasn’t the goal… contradictory to the purposes of the Black Rose Society that gave her the means to possess Toga’s sword in the first place.

Every single black rose duelist was doomed, and this was telegraphed rather clearly; we can all see it coming, even Mikage when his turn came.

The Black Rose Society arc is a litany of tragedies. It’s really very sad, pathetic, and rather dark. The prize in watching the duels is not anticipating Utena’s victory over long odds, but rather how the motivations of the doomed assailants are laid out in the open. Here is the structure of each ‘tragedy’ within the arc. I’ve attempted to make a clearer presentation of this via slideshow (feed readers will not be able to see it without going to the post page on the site).

That’s the tragic structure, interestingly undermined by amnesia — which allows the arc to ‘progress’ in sequence; there are no lasting consequences. Rather, the consequences can be revealed with dramatic timing later on in the narrative in its entirety. The convenience of forgetting the murderous intentions acted out may be a cheap conceit, but it’s entirely consistent with the motif of repetition and variation throughout the arc, and the show as a whole. I don’t mind it at all. Also,

Only those who hold beautiful memories are allowed to wish. To wish for that time to go on and on… to wish to never change from what you were.
Mikage Souji

The Black Rose Society arc is a corruptive act of remembering love. Those who failed in their duels forget the power they had held, but also how far they went (and got) to achieve their wishes. While the defeat may be a terrible memory, and also their dark turns and hitting rock bottom maybe unpleasant to say the least, but it is also beautiful. Yes, I certainly think so. Painful memories are beautiful too.

If it’s for someone you love… how you feel about others doesn’t matter. You keep lying to yourself for as long as it takes.

When a duelist like Wakaba is defeated, not only does she forget the beautiful memory of her fighting for her love, she is deprived by this amnesia of the ‘privilege’ of wishing. The privilege of wishing being the power granted to bring the world to revolution as the path prepared for them by Mikage. When Mikage loses his own duel, he is shown not only how his beautiful memory is a lie, he is literally deprived of any ability to make that time go on and on: He ‘graduates’ from Ohtori academy and will no longer remain young and ageless.

Where does Utena actually figure in this arc? WHOSE RESPONSIBLE THIS

In this arc, Utena is even more passive — or I should say reactionary. She basically reigns as the champion duelist, and take on all comers. While this was the case as well in the Student Council arc, she was then trying to learn more about her Prince, to the point of mistaking him for Toga. Here there is no motivated or overarching goal that she pursues.

Nonetheless, Utena is a hero: she stands for justice… as she imagines how her ‘prince’ must stand for justice (this is part of why she emulates him, or at least her ideal). While the Student Council arc was more about (in relation to Utena’s purpose and motive) setting Anthy free from the role of the Rose Bride in the midst of those who wish to possess her as such, and the Black Rose Society arc is more about protecting Anthy from those who wish to kill her, this is not quite the precise conflict Utena herself confronts.

The injustice that Utena fights against is how the duelists she faced intend to kill Anthy as a result of manipulation. She believes these were not actions borne of free choice. Mikage is the culprit, and thus she challenged him herself. Mikage argues however, that all these duelists acted on their free will. They were all there to ‘make their memories eternal.’ He only prepared a path for them to achieve their wishes.

These are all members of the Mikage Seminar. The girls all had memories they couldn’t forget. Very, very precious memories. And they all fought to preserve those memories. In short, they are people… who tried to change their lives according to their memories.

Mikage too, wants to preserve his memories for eternity; and to do so is to kill Anthy and replace her with Mamiya as the Rose Bride. This is the same path he prepared for each of the duelists. However, how does this exactly work for the duelists should they win? While I can easily imagine how it can work for Mikage, I don’t see how it could work for Wakaba and the others.

The question that Utena engages with swordplay is: Where does the responsibility of the duelists end, and where does Mikage’s own begin? For me, all of them bear responsibility. However, Mikage is the evil one. How exactly? He values the welfare of the duelists very little. They are expendable to him. We know this for certain because he is responsible for the deaths of 100 students bearing the rose signet ring, to preserve his memories for eternity. The lie he tells himself is revealed in the end:

Nothing in this world is eternal. Although… a heart that longs for eternity could be considered beautiful.

It isn’t Mamiya, who has been dead for a while now. The Sixth-Sense-ish reveal, sort of put me off — but not much. I am also forcibly reminded of the big reveal of Guld Goa Bowman in Macross Plus. Mikage was not only a prisoner of his own memory, the memory was completely false as well.

It made him a victim of a projection of wrongdoing onto Tokiko’s brother, but to me this undermines any sympathy I may have felt for him. Being right about the responsibility of the duelists he invited to the seminar doesn’t absolve him of his own responsibility for attempted murder in the name of eternity.

An exciting look at a high-point of the arc: the seduction and corruption of Wakaba Shinohara (animekritik 2009/12/01)

Painful memories are beautiful too, find them in this series of posts called Diary of an Anime Lived (archived by 21stcenturydigitalboy on Fuzakenna!).

The previous arc: Victory and Authenticity in the Student Council Saga of Revolutionary Girl Utena [->]

I entered the anime blogging sphere as a lurker around Spring 2008. We Remember Love is my first anime blog. Click here if this is your first time to visit WRL.
View all posts by ghostlightning →
This entry was posted in analysis, Revolutionary Girl Utena and tagged revolutionary girl utena. Bookmark the permalink.