Posted on March 3, 2010 by ghostlightning

If you had to choose what ‘anime (manga) universe’ you could be in and become a mecha pilot there (with your own machine of course) what would it be? Being a shameless mecha fan(tard), of course this is SRS BSNS. What are the considerations? How much would storyline context play a part (i.e. piloting the Tenggen Toppa Guren Lagann won’t be as fun because it appears only to fight the final battle)? I’m going to work through these here, arriving at a clear choice among my top three options.

Pilots’ status in society in subject anime universe: If I were a Zentraedi pilot in Macross, there simply was no other life — and I wouldn’t have ‘culture’ lol. If I were some Newtype fighter jock in Gundam, I’d be pretty special. If I were a Topless in Diebuster! I’d have too short a career and my post-pilot life seems so devastatingly painful. I want to make clear that what I’m looking at is a ‘career’ as a mecha pilot, not just being one to save the day in the final battle. There will be long grinds, so we better consider a gig that will be enjoyable beyond the fighting. I’d understand if no one wants to be a police grunt/salaryman from Patlabor.

Average power of mecha in the subject anime universe: I want to disallow extreme final versions of super robots simply because they’re there for final battle purposes (or as the final boss). You don’t get to start having the best machine and the highest hero rank at the beginning of your career, so you don’t get to be Evoluder Guy Shishio piloting the Genesic Gao Gai Gar (or even Setsuna F. Seiei in the Gundam 00 Raiser), just no. You needn’t be average yourself; say if you choose to be a Knightmare Frame pilot in Code Geass, I guess anyone outside the elite Knights of Britannia and their KFs are okay.

Style of combat in the subject anime universe: If you enjoy throwing boulders like Ganmen in TTGL, go for it. You may want fast aerial/space battles as can be found in Gundam. You may prefer dogfights like in Macross. Hell, you may even enjoy sky surfing with LFOs in Eureka SeveN. This is completely subjective, so I wouldn’t blame anyone for avoiding the grisly and chaotic scopedog combat from Armored Trooper VOTOMS.

These are pretty simple considerations, and allows for much subjectivity. Sure I expect many of you will min/max your way through this, but it’s all about your own enjoyment. Here are my personal results, ranked least to best.

Yes, I went there. First of all, Gundam Fighters are awesome. They are nearly super-powered in terms of general fighting ability (some of them clearly are). All Gundam Fighters are the best their nations can field and some of them enjoy superstar status [i.e. Chibodee Crockett from Neo-A(pause)merica, who also enjoys his own support team comprised entirely of hawt women; Domon Kasshu of Neo-Japan has Rain Mikamura (lovely!); but Master Asia of Neo-Hong Kong is too awesome to need a support crew]. The participants in the Gundam Fight are all Gundams, in this case all superprototypes and are massively powerful super robots (though a lot of them are complete lulz). The style of fighting is one-on-one duels, which is romantic and dignified. What also appeals to me is the decidedly non-fatal nature of the combat. It’s more a competitive sporting match rather than a war.

Firstly, the whole fighter-jock thing appeals to me (I saw Top Gun as a kid, but I saw SDF-Macross first). I get to be special, even if I’m not royalty (in Macross II: Lovers Again, ace pilots are treated like idols, but I don’t think that’s even necessary); and in Macross 7, you get to actually be a rockstar pilot.I love the VF 25 Messiah. It’s probably my favorite all-time mecha (for now, since Macross as a franchise thankfully isn’t done). The very idea of a transformable fighter w/ three forms for me is the ideal in versatility in real robot anime; even if there are hardly ever any superprototypes. Also, I favor the very fast-paced dogfight-style of aerial and space combat, it’s gorgeous to watch and probably such a rush to live through (just ask Isamu Dyson). 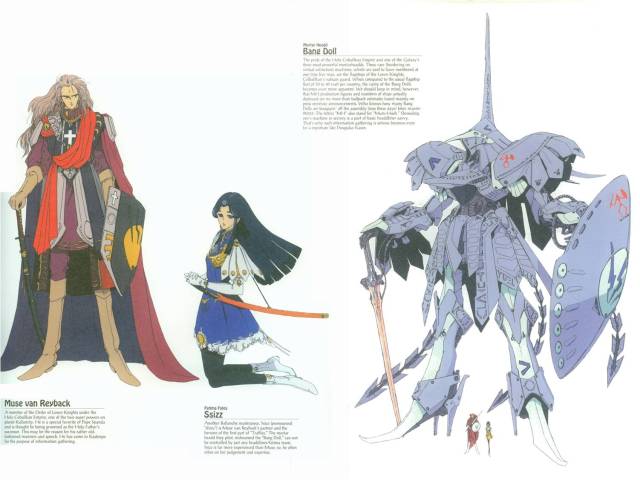 The headdliners are genetically awesome humans. They are many times stronger, quicker, and overall more powerful. Only they can pilot the Mortar Headds (as the mecha in this manga/show are called). Even at their genetic superiority, they cannot pilot mortar headds alone. They need the assistance of artificial human computers called Fatimas who are all designed to be as hawt as possible. Fatimas choose their masters (yes, I get to be her master), and always choose the strongest available. Lastly, headdliners are often the cream of society and are either celebrities, nobility/royalty, or both. Mortar headds are to me, some of the most beautifully designed mecha, and are as strong as super robots even though the narrative is decidedly that of a real robot aesthetic. The combat is both lumbering and elegant; which is tough to imagine, but there it is. Mortar headds are ground-based in almost all cases, but to me is far more appealing to the very fun but infuriating style of Battle Tech/Mechwarrior.

We have a winner! I want to be a headdliner in the Eastern Mirage Corps., a Mirage Knight serving directly under the Emperor of Light Amaterasu, with a Chrome Ballanche masterpiece Fatima. The great part about Five Star Stories is that there will be opportunities for something like this to happen, even if I’m a headdliner without credentials — as long as I have skill and luck (and yes, luck is one of my skills).

It’s your turn! Using the considerations provided, in what anime would you be a mecha pilot in? Tell us about your ‘life/career?’

Character prototypes in mecha anime over the years (Kaioshin_Sama 2009/07/04).

What the heck are real robots and super robots, and how the frick can I tell the difference? (Vendredi2009/04/20)

The Five Star Stories in We Remember Love [->]

Haven’t seen any Gundam but are interested to try? Here’s your guide, and click the link to the guide itself at the bottom of the post! [->]

I entered the anime blogging sphere as a lurker around Spring 2008. We Remember Love is my first anime blog. Click here if this is your first time to visit WRL.
View all posts by ghostlightning →
This entry was posted in comparative, fanboy, that's the game and tagged five star strories, g gundam, gundam, macross, macross frontier. Bookmark the permalink.