Addiction and freedom and paradoxes in Katanagatari 03 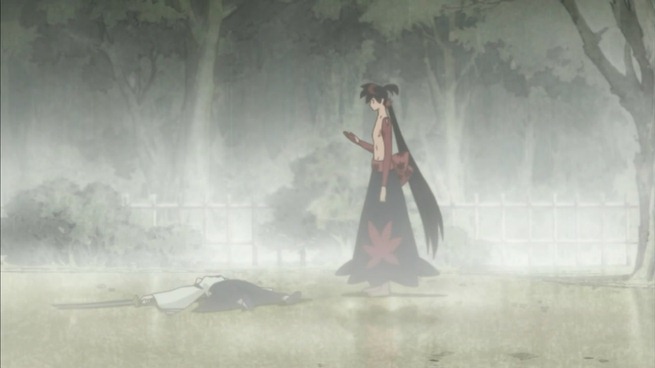 Shichika kills Tsuruga Meisai and gives life back to the shrine. Shichika who is an inexperienced fighter (only 2 or 3 battles) solves his far more experienced opponent’s cunning trap through his own experience in making a mistake in setting a trap. Tsuruga Meisai as a false name gives its bearer her true self. The medicine that Tsuruga Meisai administers to his broken shrine maidens become poisonous addictions. Shichika’s choise to give/bind the entirety of his being to Togame (to be her sword) liberates him completely in battle.

This episode is a litany of paradoxes, delivered well both through clever dialogue and characterization. Outside of Togame and Shichika, the bearer of Tsurugi is the most fleshed-out character in the show. True to character for the show, it (un)subtly calls attention to how the character (Tsuruga) fleshes herself out. 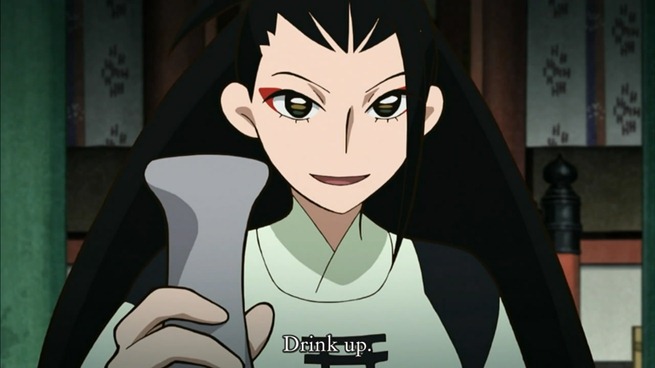 She used appeals to sympathy, and other stories that revealed her character – she tried everything to avoid a fight. The whole scene where she tried to have a few drinks with Shichika is well within the technique used in the previous episode where Togame was basically being a NisiOisiN proxy and telling us viewers how the character (Shichika) is going to be portrayed.

I think the Tsuruga scene here is superior in that the plot relation is far less tenuous albeit the conversation itself is arguably less interesting. I was riveted anyway and not tempted to distraction as I was in the previous episodes. Obviously, Tsuruga is meant to be sympathetic and the show telegraphs this. And it works. 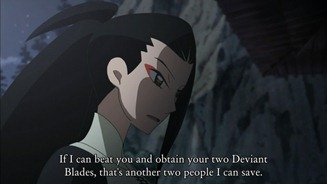 Of all the paradoxes in this show, I enjoyed how Shichika choosing to do everything for Togame, to forfeit his free will, leads to his total freedom in the context of combat. Tsuruga questioned him about it, how it could really just be laziness. Decisions can be a hassle, and Shichika acknowledges this. He then just puts things in a cool way. He is Togame’s sword, and in this fantasy world, the sword chooses its master.

It glorified fighting, and death in the context of the ‘honorable’ battle. The paradox here: it’s great to get violently killed, as long as you were trying to kill your opponent with everything you’ve got.

The one thing that could have made this episode a lot more enjoyable for me is if it had better animated combat scenes. Now I’m not asking it to become Sword of the Stranger, but blacking out to obscure the actual killing strike is annoying. In a swordplay anime, I want to see actual swordplay! Fancy techniques and super powers don’t have to obscure the complexity of the passes, parries, and strikes. Budget limitations I suppose, but this hasn’t stopped me from liking this episode the most so far —  not quite a paradox, but still rather ironic.

A take on the various swordplay anime I’ve seen through the years, noting my impressions on the portrayal of swordplay and fighting [->]

The final attacks in this episode of Katanagatari are animated in the tradition of Revolutionary Girl Utena. It is however, far more than just a swordplay show! [->]

I entered the anime blogging sphere as a lurker around Spring 2008. We Remember Love is my first anime blog. Click here if this is your first time to visit WRL.
View all posts by ghostlightning →
This entry was posted in Katanagatari and tagged katanagatari, tsuruga meisai. Bookmark the permalink.

13 Responses to Addiction and freedom and paradoxes in Katanagatari 03