Hey guys. Remember me? I’d like to take you on a quick little journey.

The time: A little more than fifteen years ago.

The place: Hideaki Anno’s brain. And what a dark place it is.

I’m not going to cite sources other than the slightly scuffed Encarta CD-ROM that is my own nerdy gray matter, but it’s a pretty well known fact: Hideaki Anno was a depressed guy with a lot of issues.

In the mid-90s, the co-founder of Gainax, the otaku’s studio — the self-made otaking, the führer of fan service, the sultan of super robots — was in the midst of a mental crisis. Disillusioned with his career and completely disenchanted with the otaku lifestyle which he’d had a hand in popularizing, his thoughts started coalescing into a story. That story gradually degenerated over 26 episodes into a “cruel thesis” about adults and authority figures abusively imposing their wills upon children who never have a chance to grow up properly, explain their sexual desires, or resolve their daddy issues.

It's got all kinds of cute girl robot pil—WAIT who the fuck is that?

Evangelion 2.22 is on everyone’s mind right now. It’s hard to escape. And watching it has proven conflicting for a lot of fans, myself included. Sure, it’s exciting, it’s shiny, it’s a shot of adrenaline straight to the skull — but is it the right thing to do?

There is a lot of angst about some of the changes Anno made to his opus. Internally, it’s a battle between how awesome Evangelion 2.22 is as a standalone robot anime and how much it has altered the feel of the original.

Well damn. That’s a horrible question. Volumes have been written about it. Plenty of speculators have questioned Anno himself on the meaning of Evangelion, and his own claims that he “intentionally scatter[ed] difficult to understand phrases in order to create uncertainty” certainly don’t help your feeble attempt to find depth in the story. But while the Gnostic/Kabbalistic Judeo-Christan imagery may be more showy than symbolic, the psychological terms thrown around no doubt represented Anno’s own attempts to psychoanalyze himself.

Let’s look at the Evas themselves, putting aside the born-from-Adam’s-rib shit for a second. What are they? Robots. Mecha. Robots rooted in the Real Robot heritage of Gundam but sticking their immense toes over the line into Super Robot territory. Fanboy fodder.

But they’re also monsters, imprisoned within a metal shell that barely contains their berserk urge to kill humanity. Suddenly Anno’s mid-90s distaste for his otaku flock sounds like maybe it’s the big neon purple brush with which Unit 01 was painted. If the robot represents otakudom, its slobbering cannibalistic core represents the destructive power of such a lifestyle — and its LCL fluid becomes the unresolved oedipal desires of its overgrown-child fanboys who still live in their parents’ houses.

Gainax had been more than sympathetic to its otaku bread-and-butter in the past (and would again in the future), but this time the charming unwillingness to grow up was a burden that only got you beaten down harder and harder by the unrelenting adults.

Sure, like Shinji you can make your own world if you really want to be that stubborn — just don’t expect it to be very interesting or full of love and approval.

An important thing: There’s no judgment on Anno’s part here. The adults are horrible, with their scheming machinations to bring about the end of the world. But is Shinji any better? Internal conflict rarely resolves itself just because you draw a picture of it.

The Evangelion units still have horrible monsters living inside them, able to overcome their unsuspecting child pilots and destroy them from the inside out. Rei is still a walking receptacle for obsession and oedipal baggage. And Shinji is still weak.

But something happens when they all come together like Jung and Freud uniting in some weird combiner mecha. Shinji makes a ballsy decision, mans up, and kicks reason to the curb. 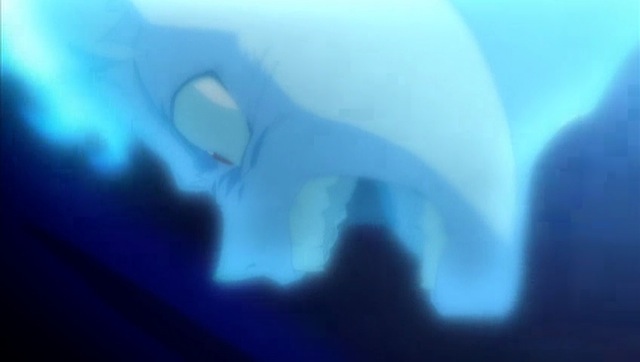 And the one anime that I couldn’t shoehorn into my “It Takes A Fanboy” manifesto suddenly fits neatly into the Gainax pantheon. This new Evangelion (for better or worse) is starting to look like a story of overcoming not only the external forces of authority, adulthood, and society, but also the internal demons that come along with choosing that kind of a life.

This is the product of a very different mind. It’s not paranoid, depressed, and at odds with the things it loves. It’s embracing those things, and returning to the LCL-filled womb of Gainax’s roots, a garden of Eden where Adam the original Angel cavorts with bouncy-boobed teenage girls in striped panties and everyone’s overcoming insurmountable odds.

Do you remember fanservice?

Or to quote Anno:

“It is a story where the main character witnesses many horrors with his own eyes, but still tries to stand up again.”

How times have changed. And everything old is new again.

I’m not trying to say whether I approve of these changes as a fan. I’m not even ready to say I loved it yet, although I am ready to go watch it another 14 times.

I am willing to say that yes, Hideaki Anno remembers love — and to go as far as to say he’s remembering love he never even knew he had.

Feel free to hurl all available accusations about Rebuild of Anno’s Wallet 2.22 in the comments, I can take it.

I mustn’t run away…