The Feat of “In-universe Parody” & What it Does for Shows (e.g. K-ON!!, Genesis of Aquarion)

Posted on August 7, 2010 by ghostlightning 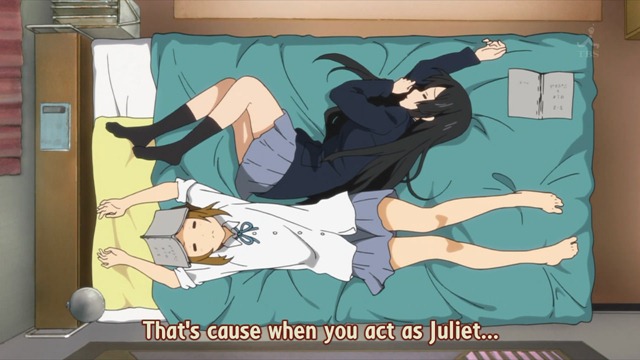 I noticed that I enjoy it when characters in a show make impressions of each other, i.e. play each other for laughs. In the latest K-ON!! episode (18), Mio and Ritsu are thrust to play Romeo and Juliet respectively for their class’ cultural festival offering. Ritsu is too masculine to play Juliet, Mio is too much of a wuss to play Romeo. This was intentional on the part of their classmates because lulz would ensue.

The two girls end up taking the roles seriously, and they make their breakthrough when they end up using each other as templates for acting in a way that is not their nature. Mio’s Romeo is basically Ritsu, and Ritsu’s Juliet is basically her copying Mio’s manner of speech and behavior. Of course, neither of which are anywhere close to accepted interpretations of Shakespeare, but the point is they used copying each other’s’ behavior to solve a problem. There’s more to this. 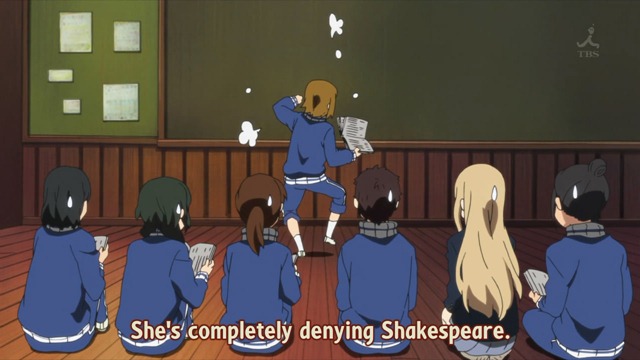 This episode is NOT about Shakespeare. His work is there for convenience and he is not privileged as a canonical playwright. Ritsu even delivers an impassioned editorial on how cheesy Juliet and her lines are. The real feature is what I call the ‘in-universe parody.’

What this accomplishes is to layer characterization in terms of presentation. You see Ritsu “doing a Mio” and it is very cute. It appeals to the wishful thinking of some viewers who wonder how Ritsu would be like if she were more to their preference of girly-girl. The same applies to Mio, whose displays of assertiveness alone is either fanservice for those who are into her tsun-tsun mode or simply a welcome relief from her annoying cowardice and meekness. 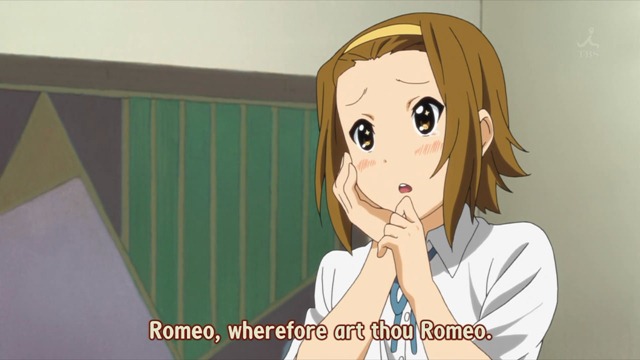 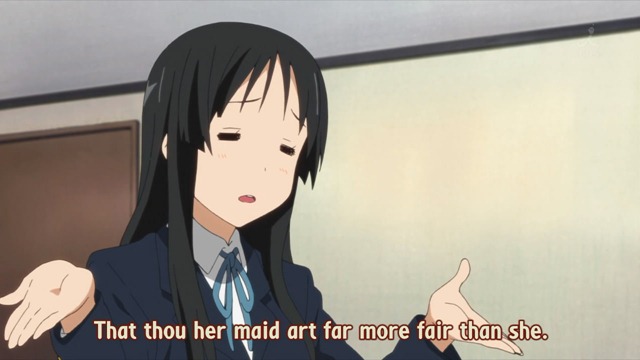 The irony is, this actually reduces the characterizations into caricature. It reduces Ritsu as a graceless tomboy, and Mio as a wussy princess (or versions of such). While this seems like a bad thing, it’s actually a bet made on the strength of the characterization done since the first season. We already know Ritsu is also kind and gentle and would go to extraordinary lengths for a friend (as she did for Mugi). We already know that Mio is the most serious musician in the group and makes up for lack of lyrics writing talent with sheer effort.

So did the gamble pay off? I think so. Without taking away from established characterization, we are reminded of how cute these characters are in a meta way. 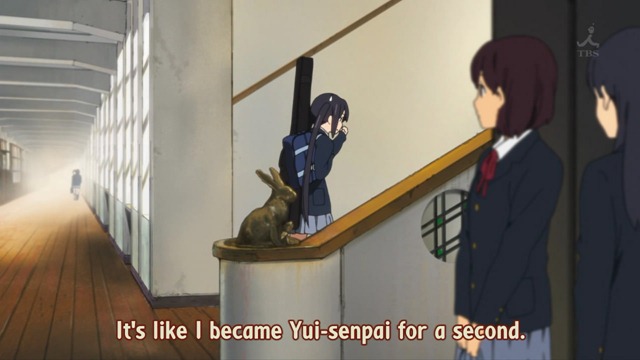 It’s not the first time the show has done something like this. A different approach was used in episode 16 where Azusa was worrying that she was losing her character. Every time she would try to pump herself up for her “comeback,” she’d end up saying it the way one of the other club members would.

What a clever show. The episode would then explore Azusa’s ‘quest’ for her own identity through individual interactions with the different members while reporting it to the ‘outside world’ (Jun-chan). This allows the episode to invest and invest in character presentation that allows for the ‘in-universe parody’/caricature in episode 18 to cost nothing or hurt character presentation.

Genesis of Aquarion devoted an entire episode to this contrivance. The characters are in a team of robot pilots and teamwork is very important. The hook is that for them to truly work with each other better, they need to understand each other fully. Thus, their training would be to portray/cosplay/crossplay each other for the duration of the exercise (more than a day).

The triumph of this is while I never did form affinity for the characters of the show (I can’t even recall their names as I write this), it became the most memorable episode in a rather forgettable series. I genuinely laughed out loud and I’ll most probably rewatch the episode shortly. The funniest bits were when the opposites were paired, which is an essay on post-structuralism waiting to happen but I won’t indulge this here.

My question is, what other shows/manga have done something like this and how? (I remember laughing a lot when Yamato Nadeshiko Shichihenge did it but nothing else comes to mind right now).

I entered the anime blogging sphere as a lurker around Spring 2008. We Remember Love is my first anime blog. Click here if this is your first time to visit WRL.
View all posts by ghostlightning →
This entry was posted in analysis, K-ON!!! and tagged aquarion, K-ON!. Bookmark the permalink.

33 Responses to The Feat of “In-universe Parody” & What it Does for Shows (e.g. K-ON!!, Genesis of Aquarion)