Posted on September 29, 2010 by ghostlightning 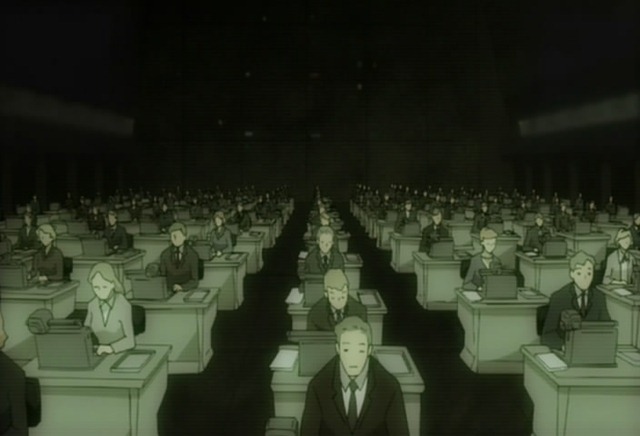 Kino travels to a land that is so rich and developed that the machines run everything and humans have nothing to do. However, it has a peculiar resource distribution system wherein the humans have to accumulate stress from difficult tasks so as to receive proceeds from the machines’ productivity.

The tasks are all pointless, since the actual useful tasks are done better by the machines. But the value the people of the land assigns to them is that they serve as a preventive measure against indolence and laziness. I see here a ridiculous application of imagination, or a severe lack of it entirely. 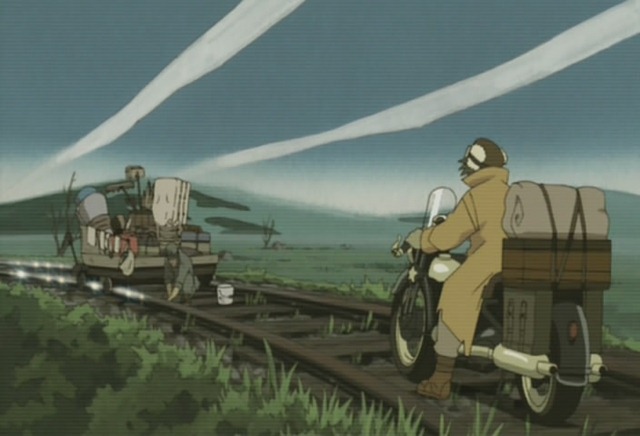 Kino actually tells this story to an old railroad employee who has been shining a railroad line for the past 50 years, having received no other instructions, nor seeing the end of the line. Kino seemed to be trying to show the old man how foolish his work is, but then the old man asks him… “Where are you headed to?”

For Kino, travel is both work and calling. She associated work with something meaningful and purposeful. After all, she chose travel as an escape from a destiny of being programmed to enjoy work that she does not really look forward to.

But a traveler travels, but to what destination ultimately? Is it mere accumulation of destinations? I know of people who really love counting the stamps on their passports – official signifiers of their passage through nations. These people enjoy the idea of being, or at least being thought of, as well travelled.

But as for Kino, at this point I don’t think she knows the answer yet.

Then the show swings the galactic hammer of irony yet again.

Kino moves past the railway cleaner and runs into another railway employee with a near-identical story, but this time he’s been dismantling the railway for the last 50 years. Yes, the pointlessness index of work just went over 9000. Then further down Kino discovers newly laid tracks… by another old railway hand who’s been laying down the tracks for the last 50 years. 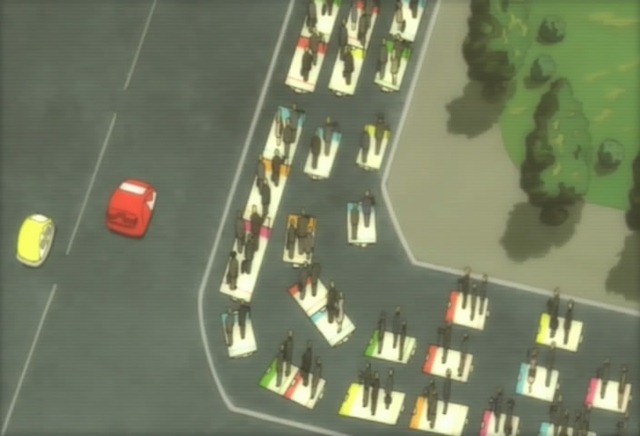 Work is pointless as work, but they all do so for compensation, to support a family, to gain a share of resources from the company or the state. This is the point of work, as currency for exchange. What would this mean for Kino? Where is she going?

For the mean time, she comes to a ruined country. The lone inhabitant welcomes her and tells a story of a people’s revolt against a tyrant, and how mob rule with the death penalty at its disposal led to an injustice more dangerous than the tyrant’s. 13,064 people were executed, as the death penalty was the only response to any failure to belong to a majority.

Voting itself became a life-or-death activity.

Kino no Tabi’s countries, and the eccentricities of their inhabitants are exercises of logical extremes applied to sociology. As I’ve mentioned before they somehow read as parables, or at least similar to the speculative philosophical fiction of Thomas D. Davis. In this country, humans left to self-govern practically annihilated themselves until there is only one citizen left.

That man begged Kino to become a citizen, otherwise his society will be doomed. Will be? It already is.

The view in this particular tale implies that the primary instinct of humans is to empathize, that is to side with a majority. However, the logical extreme is the acceleration of the destruction of the minority. Empathy should enable majority rule, but it should also tolerate diversity. Majority to be meaningful is to be a collection of individuals, not a hive of copies.

That said, the sad tale of this country merely accelerated the cost of being different, that is, to be in a minority and therefore lack power. It is an absurd exercise in logic, but it serves its purpose. Democracy isn’t or shouldn’t be mob rule, and diversity is a growth driver while extreme sameness leads to societal atrophy and ultimately death.

Here is Jeremy Rifkin on the Empathic Civilization:

Ultimately the dead country had a crisis of decision-making process. To swing the galactic hammer of irony, Kino and Hermes come to a fork in the road, and Kino changes her mind which way to go. The death penalty removes all possibility of learning from mistakes, removes possibility for growth, it removes possibility itself. 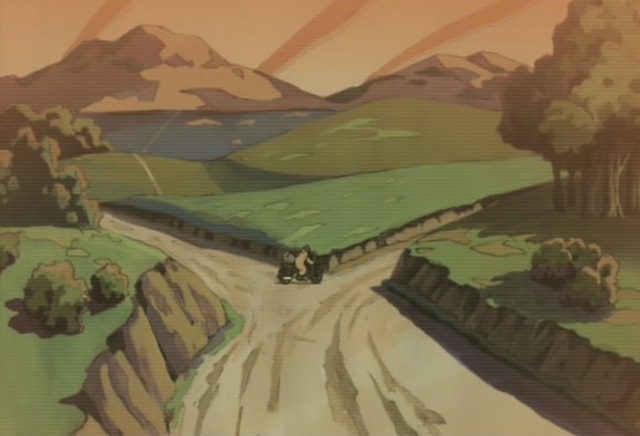 I entered the anime blogging sphere as a lurker around Spring 2008. We Remember Love is my first anime blog. Click here if this is your first time to visit WRL.
View all posts by ghostlightning →
This entry was posted in Kino no Tabi and tagged kino no tabi, kino's journey. Bookmark the permalink.