Kino no Tabi 11: Two Stories, One Journey, Many Meanings

Posted on November 9, 2010 by ghostlightning 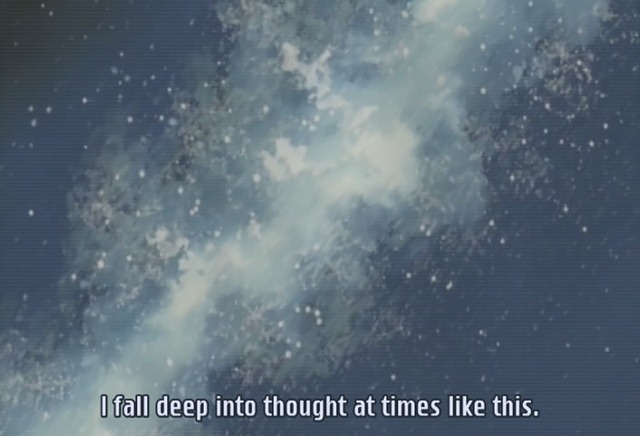 The first story proper in the episode has Kino asking about the meaning of the journey; of hers, in particular, and perhaps any journey at all. She recounts two stories of different journeys. The first one of a man trying to atone for killing the fiance of this woman who he now pledges to protect. The second is of a woman journeying to advocate against guns – that killed her own fiance, and that of the man who journeys with her to protect her.

In both stories, there is a profound inauthenticity. It’s this kind of thing that I’ve come to enjoy a lot in this show.

The atoner says to Kino that he cares not where the woman he protects goes. He will follow her to the ends of the Earth, even though he doesn’t think he’ll ever be forgiven. He’s just grateful that she allows him to live the rest of his life in atonement for what he’s done.

He says he used to have a dragon in his heart, and now people have said that he has become a man of integrity. Kino sees the couple down the road she took, and witnesses the woman kill the man who would atone for his crime. Not only has she not forgiven him, she found greater offense in that he actually became a better man.

The bartender said to Kino how human beings have such a capacity for change.

Yes, and no. Yes in that the man with a dragon in his heart became someone with integrity, and a woman who was peaceful became a murderer. No in that in my opinion, people may change, but not by much. Changes that we see here are results of incredible circumstances. Otherwise, behavioral modification is very difficult and rarely happens.

Most of the time, character is revealed, as opposed to have changed, or perhaps “developed.”

Kino’s introspection leads her back to when she met the woman who taught her how to survive in her travels. That story would be for another time, and I never expected Kino to answer her own question in this episode anyway.

The next half tells a story of another matrix of journeys – that of a man who lost his past and/or true self, and is now facing death, and those unseen people who have called him wise and followed him at least part of the way.

He lost his memory when his country’s government attempted to turn him into a non-self conscious and without desire, but able worker (like an automaton, a human slave). Someone told him that in order to find himself again he must chase after a bottle thrown onto the river. The message inside were the only true words ever spoken.

From the above we can tell again that this is an authenticity story, a contrast of truth and/or reality with falseness and duplicity/multiplicity. The only true words that were ever spoken (in relation to my own existence) are these:

“I exist. I will die someday.”

The rest are interpretations, theory, and well-intentioned guesses.

Hermes reminds Kino of the question about the sky, asked by an amiable gatekeeper: What is the “Real blue sky?” To which Kino responded:

The gatekeeper says he can’t tell if that’s the right answer or not, but he’s glad he asked Kino. I feel the same way, and this is how we’re supposed to feel about Kino no Tabi as a whole. It doesn’t really provide thorough and fulfilling answers to the questions it asks, but we’re supposed to celebrate the questions. We’re supposed to be that old man, chasing that bottle down the river.

We’re supposed to go on are own journeys.

I entered the anime blogging sphere as a lurker around Spring 2008. We Remember Love is my first anime blog. Click here if this is your first time to visit WRL.
View all posts by ghostlightning →
This entry was posted in Kino no Tabi and tagged descartes, kino no tabi, kino's journey, philosophy, solipsism. Bookmark the permalink.

2 Responses to Kino no Tabi 11: Two Stories, One Journey, Many Meanings