I introduce today’s special guest writer for this special post: schneider of the Continuing World blog, here today for his advanced robot-fu (yes, his power levels are much higher than my own) to celebrate what has been quite a great year for robot anime all things considered. I’ve made a lot of fuss about robot battles being of paramount importance in the value of a robot anime, so today we’ve brought together a panel of experts to discuss the best fights of the year.

Then schneider will rank the fights to see which is the best of the year. I won’t complain since I’ve seen fewer shows than he did (rather, I dropped SRWOG:TI sooner). Well, on to the show!

Hi, schneider here. All in all, I found 2010 to be a fruitful year for mecha anime, with lots of high quality stuff. It’s all thanks to a sizable amount of robot movies pouring in. Me and ghostlightning rounded up a bunch of friends and frenemies all pushing their case for the best robot fights of this year. We’ve got some innovative battles, some pretty ones, some both!

Here is what we got: 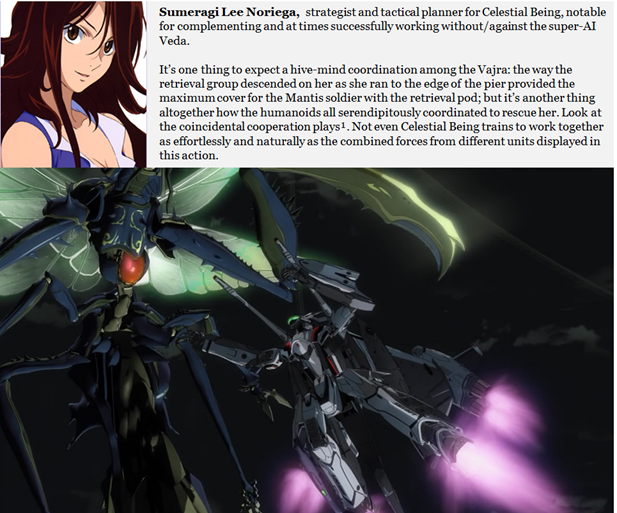 As much as I want Macross to be “real robot,” it isn’t even the magic singing that pushes it far down the realism continuum. It’s the fantasy of how units (involving a rookie like Alto even) end up performing such complex cooperation in very wild and volatile combat situations. There isn’t even a tactical command coordination — since even Ozma is freelancing.

This battle is like K-On!! episode 20 wherein HTT gave seamless musical performances without practicing, only more fantastical (especially if you consider the musical numbers involved). But like HTT’s final concert, it’s an audiovisual spectacle of awesomeness, only more so.

Moralizing aside, this entire sequence is superb, technically near-perfect. It is an amazing portrayal of how an immensely superior mobile suit combined with extra-normal abilities (Marida is a cyber-newtype, the surviving member of the Puru project, who therefore can use psycommu and funnels) will dominate a larger number of regular fighting units. I mention this in contrast with the excesses of Mobile Suit Gundam 00, and the atrocities of Mobile Suit Gundam SEED/Destiny.

What is exceptional here is the awareness of the combat direction and choreography of the physical environment and used these incredibly well to portray a dreadfully violent fight that resulted in significant civilian casualties and spectacular collateral damage.

“Celestial Being” vs. “Alejandro Corner & Army” Movie within Gundam 00: A Wakening of the Trailblazer 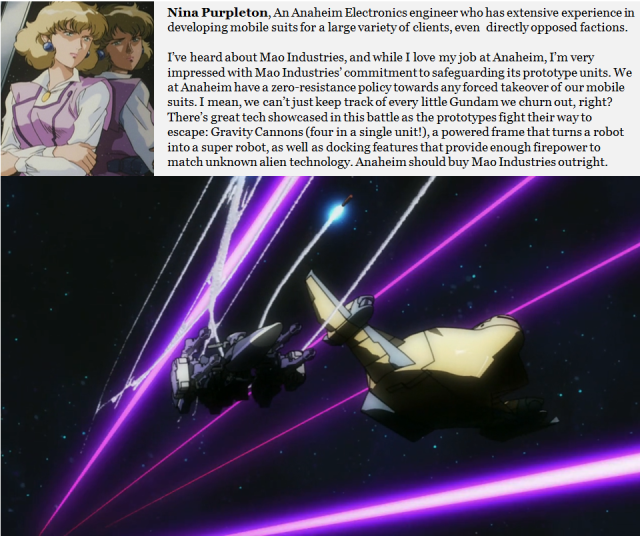 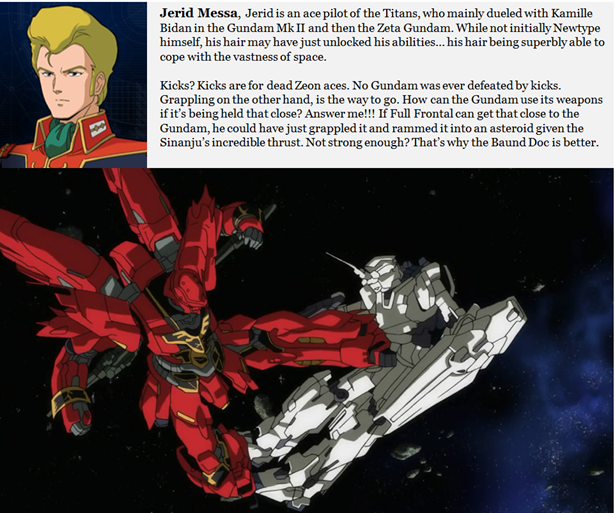 STFU Jerid. Hugging in space is one of the dumbest things in Z Gundam. I’ve said a lot about this particular fight already, but what I’ll say here is that the kick in itself, more than the obvious nod to Char Aznable — establishes how this particular Gundam show is still fantasy beyond the conceits of fictional science. Along with the transformation scenes that remain part of the tradition of Star Driver, and of magical girl shows, the impractical flourish of a kick in a duel like this add fantasy to the show.

Asuka Strikes! Rebuild of Evangelion 2.22 You Can (Not) Advance 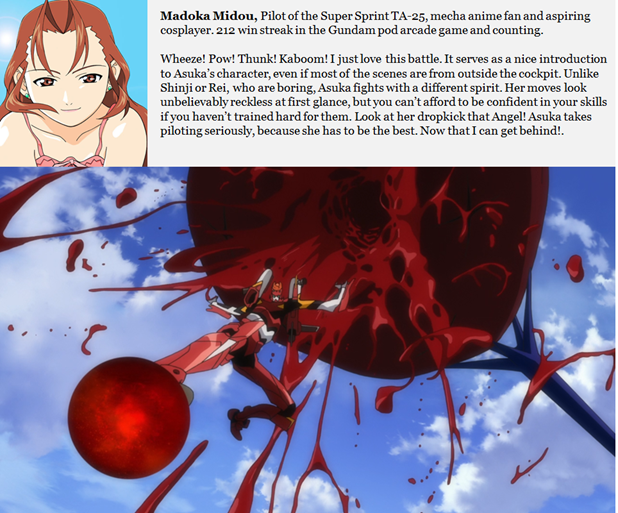 This is great. This is the antidote to all these reluctant killers in the fantasy of “real robot” anime. I hate it when self-righteous pacifism is glorified and enabled in depictions of combat — simply because that kind of nonsense gets people killed. Robot anime is better served by having pacifists away from the fighting.

If you’re going to fight, have your characters be able to pull the trigger and not do histrionic angsting during the firefight. Broken Blade shows us the cost of these things. Maybe other shows can take a hint.

If we can’t include Nanoha in the list, then this is the next best thing!

Fairlions vs Gravilion: If our prestigious award’s namesake is a little girl who is actually a mobile weapons platform, the Fairlions are mecha in the look and feel of magical girls. Up to this point, we’ve seen how SRW gets ridiculous with its robots, but the Fairlions bring that to new heights. And the show is just around the halfway mark!

Evangelion Unit 02 vs Angel: It’s not only well-animated, it shows us Asuka’s spirited character and immediately holds her up against Shinji and Rei.

Sinanju vs Nahel Argama: an ace mowing down an elite squad and a capital ship with decisive flair. Production values (animation, music) and direction are excellent.

And there you have it. It’s been a great year for mecha, all things considered, and the next year has been slated for sequels of many shows listed above (mainly Macross Frontier, Gundam Unicorn, Broken Blade). And can you say “more VOTOMS”? It’s always a good thing when we can actually put together a list like this (which would’ve been impossible last year).

LOL I know we mentioned a top 10 but Mobile Suit Gundam 00: A Wakening of the Trailblazer suddenly became available which resulted in some nuisance entries (thanks a lot Gai, thanks a lot ♥Athrun♥). Obviously Gundam 00 doesn’t represent the kind of robot fight we like, magical fairy Tieria Erde notwithstanding.

I now have the sorry job of keeping the (former) Gundam Fight Announcer’s ego in check, and the trash talking from Madoka, Jerid, Gamlin and the rest. Obviously some of our guests are severely butthurt from schneider’s rankings. How about you?