Mazinkaiser SKL is like Star Driver for Real Boys

Posted on January 2, 2011 by ghostlightning

It takes a certain maturity to appreciate (not uh, ‘ironically’ make fun of) the effeminate male antics of Star Driver with its flashy costumes, flamboyant movements, and androgynous character designs. This is only worth mentioning in this conversation because Star Driver is, believe it or not, still robot anime – despite not having a robot in its title (just like Code Geass, and Eureka SeveN). Robot fans prefer to indulge (of course not every robot fan and not all the time) a more juvenile view of masculinity that relishes in overt and indulgent displays of it.

Robot fans like their shows where men have heroic sideburns, exhibit wild aggression,  use bold language, and flash threatening fangs. Men don’t look like girls, and even women don’t look like girls. Women aren’t flat like boys, so their breasts are obvious and pronounced. No one looks ‘adorable;’ the clothing is usually too straightforwardly revealing of ripped physiques and voluptuous contours for that. So, as much as I can appreciate a robot show like Star Driver, it doesn’t speak directly to my inner juvenile male anime fan – the fan that’s been here from the start, nurtured and cared for despite all other consequences of education, intellectual growth, and overall maturity.

For up to my generation at least, anime in the beginning distinguished itself from other cartoons by having gigantic robots fighting robots with ROCKET PUNCHES. Mazinkaiser SKL (SKULL) is this show… where GAR isn’t an afterthought or a side dish in the fanservice bento. This is a show where words like God, King, or Boss are thrown about with impunity. This is a show that doesn’t care for your liberal use of EPIC, your overdependence on hyperbole, and your limited vocabulary in general. Your inner 8-year old never gave a shit about these things. I’ve been watching super robot shows (Mazinger Z, Voltes V, Daimos) since even before I had a vocabulary.

Of course, if you’re 8, you probably won’t be encouraged (or even permitted) to watch a show this ass-backwards and violent… which is also why your 8-year old self will definitely want to watch it as a God among cartoons: THIS IS MAZINKAISER SKL.

Like Star Driver the action happens on an island, where there is a struggle for control of whatever it is that will allow the winners to dominate the use (or in this case, production) of giant robots which I presume are rather useful in world domination. Instead of the lead male washing up on the shore, the lead female (in what could be a superficial love triangle; trivia: Hayami Sayori plays Tsubasa Yuuki in SKL and Agemaki Wako in Star Driver) ends up crashed on the island. But instead of a calm beach at twilight, she lands in a THREE-WAY BATTLE OF GIANT ROBOT ARMIES.

Predictably, the battle is in some kind of deadlock… until Mazinkaiser shows up and starts ripping everyone apart. Unpredictably, the Mazinkaiser is controlled by two pilots – alternating whenever Kaiser changes main weapon load-out: a sword as big as a fucking boat, or a pair of pistol-daggers. This gives Kaiser two very different looks. Super robots are mostly depicted overwhelming enemies with raw power and the the big sword lets Kaiser keep up with tradition. The pistol daggers, fought with Gun-fu technique lets us see the big bruiser type machine move with fluid form at remarkable speed. It’s definitely a new look and something I’m enjoying a lot.

Far more effeminate robots like the Lancelot (Kururugi Suzaku, Code Geass), or the Freedom Gundam (Kira☆ Yamato, Mobile Suit Gundam SEED) wished they could move like this, but the Kaiser got better moves than these weenie machines. The Kaiser moves better than Katanagatari’s Emonzaemon who did the dual-pistol thing in a sword fight.

This is significant because at the core of things, robot battles are large melees. Despite all the projectile weapons and massive beams, there is nothing as exciting as giant robots busting each other up with swords, poles, spears, knives, and fists. Despite the supposed army battle, the whole thing is a massive brawl. This isn’t Legend of the Galactic Heroes. It’s more like a massively multi-player fully armed mixed martial arts online fracas. 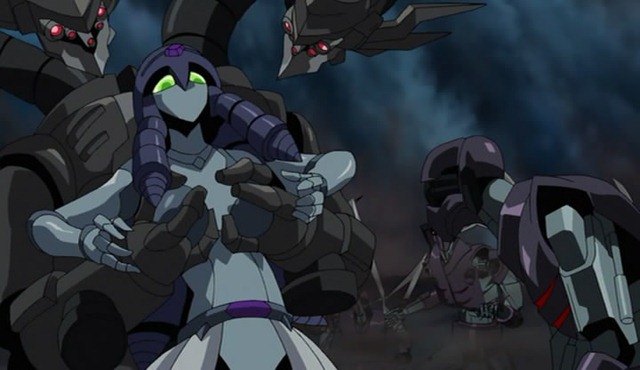 Mazinkaiser doesn’t have to worry who to smash: if it doesn’t have tits, kill it (oops). It’s that kind of (awesome) show. Therefore, Kaiser just goes where there aren’t robots with tits, and just rip everyone apart in a death spiral of metal.

Here are some things to appreciate (especially if you’re A REAL BOY):

Voice actors going from playing wimp roles to soldiers of DEATH CAPRICE; it happens here. Furthermore, instead of the more colorful and light-hearted invincible tower of steel, Mazinkaiser goes for the dark God that is Hell on Earth: 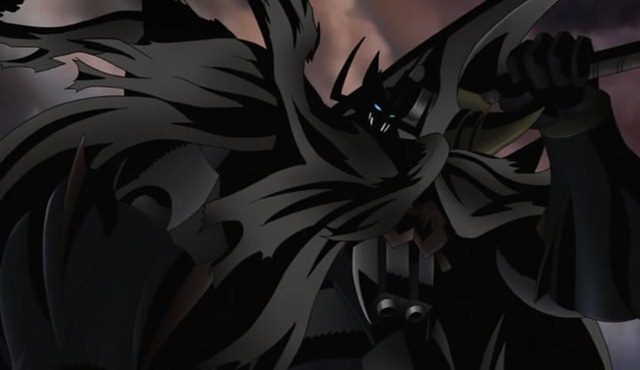 It makes me remember love for so many good things about anime violence (as well as Nagai Go’s corpulent body of work): 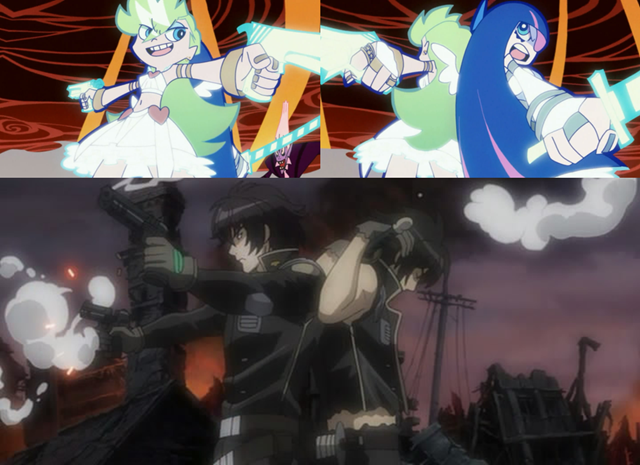 Bad Boys references aside, that is. I don’t want to get too into the things I want to talk about here in Mazinkaiser SKL until more people have seen it. I just want to hype the show up as much as I can, and even if I did think we got a good year in 2010 as robot fights go…

…if you don’t enjoy this kind of thing too much…

Mazinkaiser SKL has a lot more of this.

I could go on and on or, you can just experience Crusader’s jizz-powered dick-wagging as he faps to our MEIN KAISER in this post. So if you want to turn back your internal clock just a bit too much, or cleave the dictums of good taste with a gigantic sword, or beat the crap out of boredom with twin TURBO SMASHER PUNCHES, or if you just want to turn into a GIANT PAIR OF TESTICLES (like I did after watching this episode), then hurry up and watch Mazinkaiser SKL.

I entered the anime blogging sphere as a lurker around Spring 2008. We Remember Love is my first anime blog. Click here if this is your first time to visit WRL.
View all posts by ghostlightning →
This entry was posted in fanboy, first impressions, Mazinger Z and tagged mazinger z, mazinkaiser, mazinkaiser skl, Star Driver. Bookmark the permalink.