The Purpose of Anime and Manga (Part I)

Posted on January 11, 2011 by ghostlightning

…is entertainment, I got it. However, it isn’t always as simple. There are complexities and nuances to the experience of watching anime and reading manga that, even if it arrives at an entertaining end, accomplishes (or can accomplish, at least) a few other things.

Stories in general are entry points to different aspects of culture, both familiar and foreign. While some of us may not be particularly interested in Japanese culture (I like reading Tolstoy, Dostoevsky, and Kundera without being particularly interested in Eastern Europe), others are in a big way. Anime and manga aren’t very reliable sources in a factual or research sense, but like I said they are entry points to further inquiry.

Also, there are different shows for different entertainment purposes. I find this kind of categorization perhaps more useful than genre-based taxonomies (which can get silly pretty fast).I’m going to go into these here, as I look at how I use anime for different purposes.

The purposes are numbered (for my own reference), but appear in no particular order.

Purpose 001: To make time stand still so I can relax in a way that my problems matter less in the next half-hour.

The first show in the “trilogy” has a lot to do with introducing the characters and setting (and yes, it takes its time to do that too). The final show, has the theme and plot points culminating with dramatic force. It is in this particular installment, with the most number of episodes, that time really does seem to stop. I can feel how each season on Aqua is twice as long as it is on Manhome. The days in the lives of the undine seem exceedingly thin slices of a narrative that doesn’t seem to go anywhere.

I live my life very purposefully and specifically – and these undine apprentices do too. However in Aria, the Natural it won’t seem so. It’s a beautiful kind of nothing ever happens, and yet so many moments seem so beautiful. My wife and I wish we could just pack up and go there (Oh yeah, we kind of did).

Purpose 002: To feel like a kid on a truckload of caffeine and sugar on Saturday morning 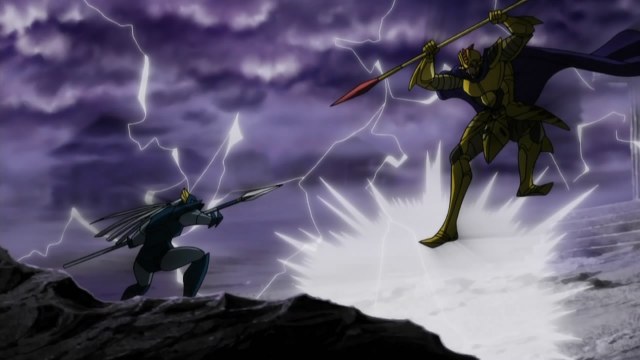 Even the name… it’s such a tongue-twisting miasma of craziness that you’re put off balance even before you sit down to watch it.

Gainax learned long ago, with Gunbuster and later Gurren Lagann, that to fully recreate the Super Robot experience you had as a kid, you have to adjust the scale. You’re older now, presumably physically larger (even if just around the middle), and Mazinger may not look quite as impressive as he did when you were eight and he was adapted (horribly) as Tranzor Z in your Saturday morning lineup of toy commercials.

While Gainax solved the problem of scale literally, cranking the sizes of their robots to 11, Yasuhiro Imagawa took a slightly different approach. He amplified the feeling of being a cracked-out kid, high on weekends and bright colors and loud noises and sitting too close to the TV with a bowl of Kellogg’s Super Sugar Frosted Magic Fuck-O’s while Go Nagai’s most enduring creation sped across the sky on his Scrander, defeating evil pretty much without fail.

The violence is bigger, the super-villains are stacked higher, Sayaka’s legs are longer, and everything explodes fifteen times more magnificently. Giant robot fans will remember those days, not just in their minds, but in their stomachs and hearts as well — if you’re ready to hop on a delirious and giddy sugar rush back in time, then you need to see Imagawa’s Shin Mazinger.

Purpose 003: To escape (from the prison of reality lololol – ghostlightning ed.)

A typical Ken Akamatsu plot goes something like this: harem protagonist and harem are kicking back at the hot springs/pool/beach; haremette #12 does something unusual, which must be addressed by harem protagonist and haremettes #1-11; as it turns out, haremette #12 is involved in the labyrinthine plots of a hidden organization of magi and an anthropomorphic A.I. with ties to an ancient turtle empire; hilarity ensues.

Akamatsu-sensei is quite good at lulling the reader (or at least this reader) into other times, places, and (increasingly outrageous) circumstances. And that, I think, demonstrates his skill as a writer. “Escapist” is often applied as a pejorative, but escapism isn’t an easy thing to accomplish. I mean, try it sometime. Try to write a story that thousands of readers can’t put down, a story that genuinely entices readers out of the world they inhabit and into another.

And escapism is important. Sometimes we need to step away from the world we know, lest it wear us down or drive us crazy. I happened upon Love Hina during a time when I could’ve used a chance to set worldly logic aside, get my personal bearings, and pull myself together — as a teenager, in other words — and so, much as it champions some of the things that people despise about post-2000 harem, it’ll always remain a cornerstone of my fandom precisely for the fantasy it supplies.

We Remember Love is publishing this post series twice a month – given that I have many purposes for my anime (and manga), just as you might have.

These purposes often occur in hindsight, but in some cases (more often than you think) you figure out your purpose of watching a particular show after a few episodes. So, you can claim purposes when watching ongoing shows, and especially ongoing manga.

Do you watch these shows or read manga for similar purposes? Let me know how these shows work for you?

I entered the anime blogging sphere as a lurker around Spring 2008. We Remember Love is my first anime blog. Click here if this is your first time to visit WRL.
View all posts by ghostlightning →
This entry was posted in The Purpose of Anime, today's special guest writer and tagged aria, love hina, mazinger z. Bookmark the permalink.

43 Responses to The Purpose of Anime and Manga (Part I)