Fractale 01: The Looming End of Our Fantasies

Posted on January 14, 2011 by ghostlightning 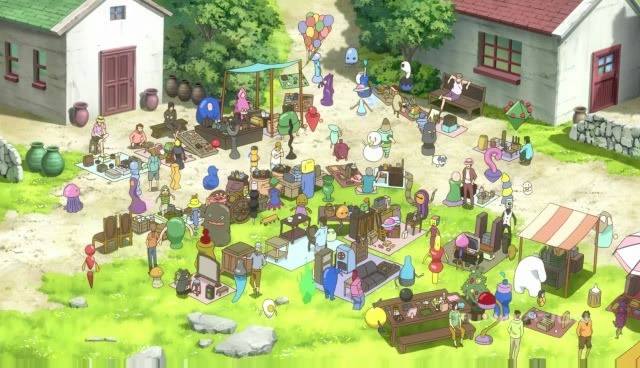 Clain’s awkwardness towards Phryne who strips naked in front of him is exacerbated by his sheltered, comfortable, yet isolated life. It gets me to consider the world being built by this tale, which is straight out of contemporary fantasy:

Everyone’s basic livelihoods are taken care of, simply by being connected to some form of the internet.

For many of us, this is already the case (always connected). As a result for some of us, we spend less time socializing in meatspace. Many if not most of our conversations occur electronically, and we spend more time looking at our friends’ avatars than speaking to them in the flesh. I’ve seen my best friend less than 30 times the past four years even if we live in the same metropolis. We’ve never been better, but I realize we’ve shared most of our time in our day-to-day with other people. In my case, friends I’ve made online.

For some of us, the idea of a safety net that exists because of our connectivity and the same time serves our connectivity is fantasy of a high order. This is the contemporary Hakuna Matata kind of life. The only enemy left is boredom.

Fractale illustrates this environment in a way that reminds me of Oz in Summer Wars, only that there is this interesting interplay between “doppels” (avatars) and physical people. The marketplace Clain visits to get his fix of archaic (21st century technology) is populated entirely of doppels. 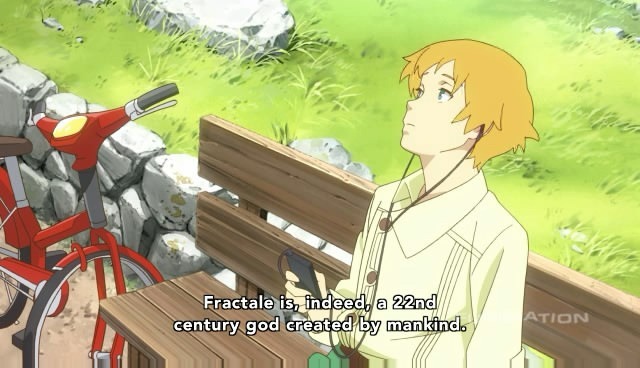 The memory card he shoplifted (for all intents and purposes) from the market contains a presentation of the Fractale System, and is the source of the exposition. We find out about the connectivity for $$$ setup, and then something very interesting to me: the Fractale System as God.

Religion is also organized around rituals, and these often involve prayer. In Catholicism there is the twice-a-day Angelus, wherein people stop whatever they’re doing (including walking) to pray.  Clain stops and stares at the sun, as instructed by the Fractale program, to pray and perhaps offer thanksgiving.

If the Fractale system removes the problem of suffering due to privation entirely, it is arguable that it has done more than God would do for creation. This is why it presents itself (or perhaps there are those who present it as) the operational God of this world. If your most basic needs are taken care of (an income to survive, to participate in the market), then aren’t you free to pursue your dreams?

There would be those who have no such ambitions, content to idle and the only dragon worth slaying is their own petty boredom. But that’s just part of the diversity of dispositions. The fantasy of the Fractale system allows the likes of them to perform no real contribution to the world, and yet not cost the world via their borderline parasitic existence.

But the thing is, the plot of Fractale is that this system is going to crash. The fantasy cannot be sustained. People will have to strive and therefore suffer. And perhaps, the way to this story is through the pastiche, mashup, collage, champloo of otaku database tropes and others (as the behavior and presentation of Phryne’s pursuers reminds me of Ghibli films, and “Happy Tomino” anime¹) – just as The Melancholy of Haruhi Suzumiya did it for its own science fiction elements.

Will the fall of the Fractale System give rise to its success as an anime? The fall suggests, via the values of Phryne, a return to the archaic – but authentic life for humans; a return to a life where Clain can smile his real smile.

I entered the anime blogging sphere as a lurker around Spring 2008. We Remember Love is my first anime blog. Click here if this is your first time to visit WRL.
View all posts by ghostlightning →
This entry was posted in first impressions and tagged fractale. Bookmark the permalink.

52 Responses to Fractale 01: The Looming End of Our Fantasies