The Purpose of Anime and Manga (Part II)

Posted on January 25, 2011 by ghostlightning

In the previous issue I introduced my concept of watching shows and reading manga for particular purposes, which I find personally more useful than categorizing them in genre lists. Those lists are still useful for award-giving purposes, genre analysis, among others. However from an introspective standpoint there are more interesting ways of doing things. I get weary of arguing whether a show is or is not “slice of life.”

In this issue you’ll find two shows notable for their gratuitousness, and then a manga notable for its incredibly uplifting quality.

Purpose 004: To enjoy a side order of characterization with a main course of fanservice.

Best-in-class: Highschool of the Dead

Amidst the tits bouncing in bullet time, I was able to perceive the following:

The adult nurse who acts like a tease to the lead male but at the same time is one of the least sexually threatening characters in the show. How does it pull this off? I do think it’s remarkable.

We have twintails who is also hung-up on the lead but is conflicted by an attraction to her opposite. She isn’t as interesting relative to the amount of screentime and dialogue she gets, but she has great chemistry with whomever she interacts. How does it pull this off? I think it’s remarkable.

We have miss OTP, who must have all sorts of complex shit going on after what happened to her boyfriend and everything after that — but the way she soldiers on isn’t catatonic, isn’t ignorant, is purposeful, fearful, courageous, vengeful, and hopeful at the same time. How does it pull this off? I think it’s remarkable.

We have samurai ojousama, who is older than our lead male but plays the role perfectly of the only character who can contextualize appreciatively our lead male’s manliness. She is a woman — playing a traditional male role, objectified as fuck (in that apron), and yet acting as THE barometer of manliness in the show. How does it pull this off? I think it’s remarkable.

The fat otaku elevated fanboy … nobody dumps on him except those who are attracted to him in particular. And yet, he doesn’t behave contrary to his type. He is elevated, but not because he stopped being who he is and what he’s about — but not in a rebellious without a cause empty way. He reminded everyone that they’re still human. The otaku acted as the last outpost of humanity in the apocalypse. How does it pull this shit off? I think it’s remarkable.

And finally, our lead — who isn’t easily shoehorned as a stand-in for the otaku viewer. There already IS an otaku in the cast. He isn’t quite your histrionic bancho either. He was just the guy who didn’t get picked. He isn’t remarkably bad, he just wasn’t the one. But see, THE APOCALYPSE CHOSE HIM. His rival wasn’t fit for the apocalypse. That said, there’s nothing he does here that we can’t say that his dead rival couldn’t have done better… except, perhaps be as attractive to everyone beyond Ms. OTP. This makes him and the story very interesting and I think it is remarkable.

Purpose 005: To live out every man’s fantasy as a harem protagonist, even if it kills you

Did you ever watch a harem anime — one of the standard, Akamatsu-template variety — and think to yourself, “sweet Kenshiro in heaven what a pussy! I would never stutter and blush my way through all these Naked Misunderstandings the way Keitaro/Rito/insert-here does! I would throw it up in her butt!”

The reason why these harems work is because they take place in a magical quasi-Japanese land where things are innocent. Picture it: a warm but pleasant summer breeze is creating subtle waves in the grass as cicadas buzz noisily but not annoyingly in the venerable shade trees outside your quiet porch. Perhaps you’re eating ice cream, or sipping tea (it’s not too warm for tea, but it’s not too cold for ice cream). You can smell the flowers on the air, and you can see the panties of every girl who walks by. Ahh. Breathe deep, take it all in. It’s a beautiful life really. You can enjoy the company of any number of girls, of any ages and demeanors. Sure, it’ll make that one girl jealous, but it’s probably just true love that she can’t express too clearly.

It’s all very lovely. But until you marry that true girl, you’re not going to have any sex. That’s right. I hope all those lovely panty-flashes can fuel your nights spent shaking the hand of the unemployed, because that’s what you’re gonna be doing.

What’s that? You’d like to have sex? With girls?

No, no, it actually is possible, it can be arranged. But there’s a catch. See, if we introduce something as adult as intercourse, we also have to introduce consequences.

Oh, but the consequences.

Despite what those US Manga Corps previews said before all the Kawajiri OVAs, this shit is for kids most of the time. If you’re interested in enjoying some more “adult” concepts while watching an amazingly canny subversion of the harem genre, there’s probably only one anime series in existence that fits the bill. And consequences will never be the same.

Purpose 006: To feel good about people, and about ourselves by extension. 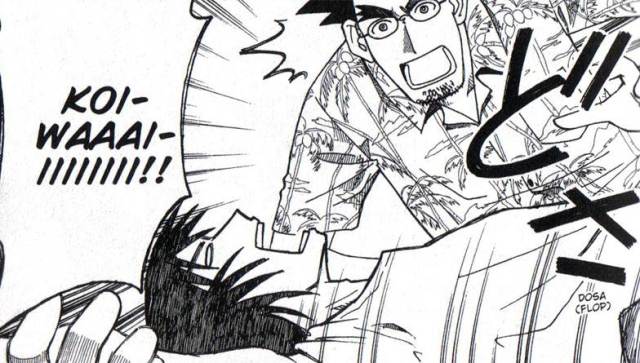 My favorite characters in Yotsuba&! aren’t the kids. They’re the adults who create the environment that enables Yotsuba to approach the world with her trademark sense of wonder.

I don’t think that’s an easy thing to do. It requires that the adults themselves approach the world with a sense of wonder, which is possible, certainly, but it requires negotiation with the cynicism that comes with growing up. It’s nice to think that someone might remain capable of unrestrained fun even after navigating through adolescence.

Of course, anime and manga characters do all sorts of admirable things, and it isn’t always given that we can emulate them — we’re talking about stories that traffic in the extreme and over-the-top. But, here, we aren’t exactly dealing with using galaxies as throwing weapons; we’re dealing with people interacting with other people in particular ways, and human interaction is something we do all the time.

And think of it this way: a fictional character is merely a facsimile of a human being, in the same way that a story is a facsimile of life. If a facsimile can enjoy everything, as it were, is it so hard to imagine that a person might do the same? I think the answer to this question is “it depends,” but Yotsuba&! presents characters and settings authentic enough that the attitude it espouses seems within reach — and that’s reassuring.

We Remember Love is publishing this post series twice a month – given that I have many purposes for my anime (and manga), just as you might have.

These purposes often occur in hindsight, but in some cases (more often than you think) you figure out your purpose of watching a particular show after a few episodes. So, you can claim purposes when watching ongoing shows, and especially ongoing manga.

Do you watch these shows for a similar purpose? Let me know how these shows work for you?

I entered the anime blogging sphere as a lurker around Spring 2008. We Remember Love is my first anime blog. Click here if this is your first time to visit WRL.
View all posts by ghostlightning →
This entry was posted in The Purpose of Anime and tagged highschool of the dead, School Days, Yotsuba!. Bookmark the permalink.

22 Responses to The Purpose of Anime and Manga (Part II)