The Possibility of Being SUPER (Robot) and Mobile Suit Gundam Unicorn 03 (Also, an Offering of Sympathies to the Japanese People Affected by the Magnitude 8.9 Earthquake)

Before anything else, I invite you to join me in offering sympathies to all the families affected by what could be the strongest earthquake that hit Japan. Yesterday an 8.9 magnitude monster ripped Northeastern coast of Japan. The strength was such that the Eastern cities were all shaken up. The real scourge came from the sea, as a 10 meter high tsunami swallowed up airports, farmlands, roads, and cities.

Four hours later the same waves started reaching the shores of the Philippines, luckily only a meter high at this point (due not only to our distance from Japan, but also since we’re south of it we’re facing away from the ocean trench that catapulted the wave into its beastly dimensions. As hardened we are to natural disasters, we are never and nowhere as capable as Japan to respond to such. We are lucky this time.

If you can give more than sympathy to the Japanese people, then do so with my appreciation.

I will discuss something very specific in this post (the first of two I got planned for this episode), but I acknowledge that some reactions to the episode in general may be good to do. I’ll get these out of the way first.

The show just got even better. It’s amazing how it did, but it happened. While I doubt I can say that the fights here are better than the previous episode despite having 2 battles, one of which is a pretty complex set-piece with lots of units involved; much less can I say that the fights exceeded the excellence of the battle within Industrial 7 Colony in the first episode. I can say that the very high standard is maintained, that only Broken Blade currently matches.

What really got me this episode is the work on characterizations. One such character proved to be such a revelation here. You know who. Thematically, there’s a lot interesting things going on as well. Bottom line, the show is exceedingly excellent and it’s amazing how I think it’s still going to get better, that crazy good stuff is yet to come. I won’t be going into much detail on the abovementioned aspects of the show in the post though I’m more than willing to discuss them in the comments. For now I’ll discuss something I feel won’t be taken into account by a casual viewing of the episode: robot thematic meta and the NT-D System.

Like Broken Blade, Unicorn joins the super/real robot inversion party. The Unicorn is almost like a sentient machine or, a machine with its own purpose that it accomplishes independently from the will of its pilot.

It’s like the God/Devil possibility in Mazinger Z though in execution it’s more like the demon king possession dynamic of Mazinkaiser (OVA ep 02). It’s not that much of a stretch at all really, given the magical powers it unleashed in this episode.

I have never been happier seeing Newtype Powers abused as I’ve seen it in this episode. Gundam has done so much with these magical abilities over the decades. The schtick is to have a machine amplify or channel an inherent NT ability and turn it into some force that either unifies beings or saves something. Z Gundam allowed the user to access the power of dead Newtypes. The Nu Gundam with its psychoframe allowed Amuro to single-Gundamly stop an asteroid from destroying the Earth (a digression: I appreciate how the most powerful Gundam magic isn’t of a Newtype nature –Turn A’s Moonlight Butterfly).

Among villains, however NT powers are entirely weaponized in a very straightforward way: they get to control remote beam weapons (FUNnels). They don’t get to do fruity koombayah stuff like understanding other NT’s completely in a mid-space duel reverie in some naked mind trip. That’s always reserved for the lead male pilot.

But here in this ep, for all the rhetoric and reference to NT being this evolutionary step to cope with the vastness of space, replete with aforementioned naked space reverie, is the most overwhelming display of NT power, and it’s of pure martial application: the NT-D system of the Gundam Unicorn.

The NewType-Destroy system activates whenever the Gundam is fighting a Newtype. We’ve seen it in the previous episodes wherein the Gundam starts glowing and gets power-ups in terms of speed, and output. It is for all intents and purposes a Universal Century equivalent of Gundam 00’s TRANS AM system for its GN-particle powered mobile suits.

It didn’t however, show in any way how it is an anti-NT system specifically. This episode reveals it, and HOW! Banagher via the Gundam was able to wrest from and fully control from Marida all the Kshatriya’s NT weapons (psycommu controlled funnels). I now realize why the Unicorn doesn’t have funnels of its own despite the Nu Gundam’s success with the Fin Funnel system. It doesn’t need any! The Gundam will always be more than enough for any non-NT mobile weapon, and then it will just dominate NT weapons by using its own funnels against them. Amazing stuff.

The Newtype Destroyer system. If it identifies the enemy as a Newtype, the suit’s limiters are disengaged. It’s a hunting machine that combines the paranormal interface of the psycho-frame abd the power to take control of an enemy’s pycommu weapons.

Now this reminds me of my own bewilderment at the lack of funnels on the MSN-06S Sinanju. The Sazabi had funnels, but the Sinanju IIRC is a prototype of the RX-0 Unicorn Gundam. What’s apparent though, is that the Sinanju offers no exploitable weakness for the NT-D. Holy plot convenience Gundam (not a complaint)! 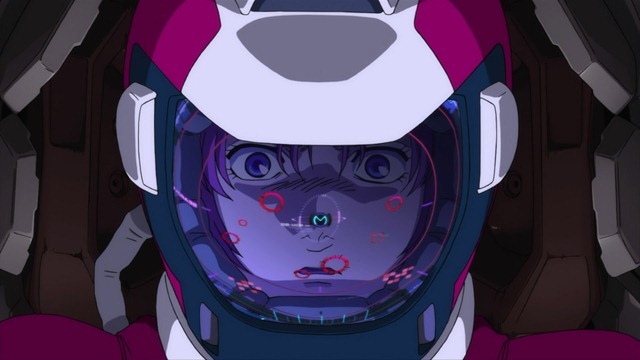 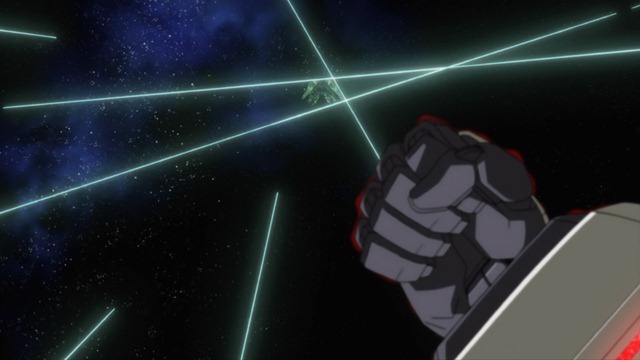 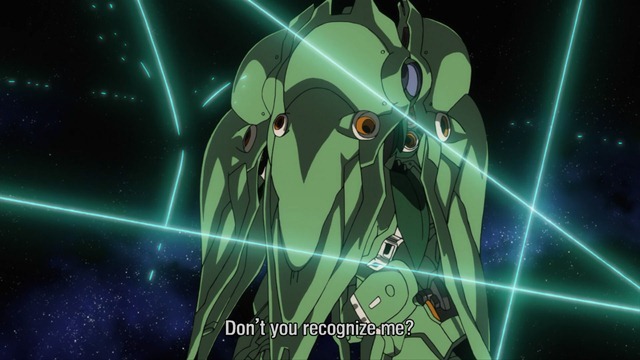 The Gundam takes over the pilot during NT-D. The first 2 sorties had Banagher pass out in the cockpit. This time however, he retains his senses after beating Marida. I imagine he must be quite lucid to ensure she isn’t killed — a significant thing since I reasonably assume that the NT-D would destroy her if able. More on this later.

Gundam Unicorn fulfills two leitmotif aspirations of the original Gundam, then called the “White Devil” by the Zeon forces in the OYW: it is wholly white (as the Gundam was intended to be before concessions to toy-marketing considerations), and it inherently behaves like a devil. It possesses the pilot; it possesses in part the victims (the funnels); then of course it exists to kill Newtypes.

Daguza Mackle’s amazing character turn in this episode is punctuated by his final words to Banagher. Banagher grew up without a father, but he’s gained two valuable ones in a short amount of time (only to lose them at the moment they can be acknowledged as fulfilling the role). The most personally valuable point in Daguza’s words to Banagher concerns how he needn’t be swallowed by the machine. His heart is what prevents him from becoming a cog in the Gundam (NT-D). Daguza related himself to Banagher as a cog in a giant machine called the Earth Federation, and yet in the end the cog showed heart and became bigger than the role that played him.

The innovation that the original Mobile Suit Gundam show brought is how robots function more as machines of war instead of super heroes powered by what amounts to magical energy and results in magic abilities as what super robot anime presented. In succeeding shows in the Gundam franchise this is consistently compromised by an increasing involvement of magic powers involving not only the pilots but also how the robots work and fight. It’s as if Gundam wants it both ways. The Unicorn Gundam is as close to the original piloted God vs. Devil super robot Mazinger Z as any of its incarnations in the UC and otherwise.

The RX-0 Unicorn Gundam: God of Possibility, the White Devil.

As Daguza said to Banagher, this Gundam is more than just a hunter of Newtypes, within it is the power to play the role of ending the UC conflict. Banagher may not be a soldier, but his ability and involvement makes it his responsibility now to see things through. To hammer the point further re: the God vs. Devil binary:

Full Frontal sees the RX-0 in terms of the NT-D, the UC project – as a weapon first. Daguza tells Banagher that it is more than a destroyer of Zeon, that it has a transcendent role in the La+ project.

Banagher and the Unicorn will be both, no doubt, but it is obvious to me what is privileged – what is good and heroic. In the end what I’m excited to find out (don’t spoil me) is whether I get a kind of tragedy as a treat (the way Z Gundam was tragic).

69 Responses to The Possibility of Being SUPER (Robot) and Mobile Suit Gundam Unicorn 03 (Also, an Offering of Sympathies to the Japanese People Affected by the Magnitude 8.9 Earthquake)