Humor and comedy in robot anime is almost always an element within a larger set in the recipes that tend to favor drama. Even when the shows back in the 70s are decidedly children’s fare, I remember that the laughs came due to jokes and humor that come along with the objective of beating the bad guys. Even the more serious shows will have the odd comic-relief episode among the 40 or so their respective runs.

It is rare to find a robot show that is wholly dedicated to laughs. Martian Successor Nadesico comes to mind, with its cerebral (parody, trope-referencing, and allegory) and slapstick approaches, but the thing about Nadesico is I end up taking it quite seriously. This is not a knock on its quality, only that I have some difficulty relating to it as comedy and instead I often lump it together with the other serious space operas.

But ghostlightning, Mobile Suit ZZ Gundam was a robot comedy that preceded all of these (1986).

Sorry about that. I hate ZZ Gundam. I do love Gakusaver though, I’ll try to tell you why without spoiling.

There’s a big robot (Gakusaver) that is effectively commandeered by some loser school teacher wearing shades reminiscent of Coach Ohta from Gunbuster! (Hashiba) from the laboratory that discovered/built it. He then manipulates the members of the student council (his charges) to pilot the robot by bribing them with extra credit. The members of the student council are all grade-grubbing freaks conveniently playing school anime tropes and archetypes of both elite students and stock characters (genki loli, baka-gaijin, grouchy ojou-san, yamato nadeshiko, childhood friend, etc.) and thus they end up being the permanent pilots of the Gakusaver.

Hashiba is like Gai Daigoji from Nadesico if you had Gai usurp authority. He’s like Kamina from Tengen Toppa Gurren Lagann who will send you to the jaws of death – but will not fight with you… this guy is funny as hell. The plot conveniences that keep pushing him forward as the self-styled chief of the Earth Savers is a laugh-out-loud joke in itself. 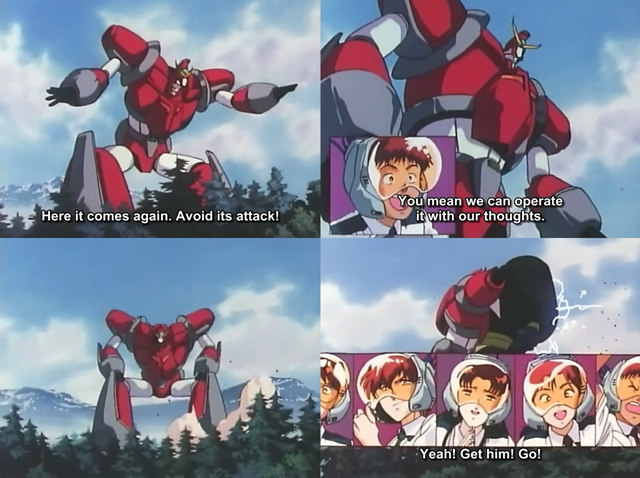 The first episode left us in tears with all the laughing we had to do (I watched this with two other ginormous robot faggertroopers) and while the laughs aren’t as sustained in the rest of the 6 episodes, the show is consistently funny even as it gets very weird in places. The jokes come fast and in bunches; and to its credit it never dwells on its punch lines. The ending is a forehead-slapping hoot.

If you enjoyed the parody aspects of Gunbuster! and Martian Successor Nadesico, and that you’re in the mood for something that has even more slap-your-knee, punch the guy watching next to you kind of laughter. I wholeheartedly recommend Shooting Star Gakusaver.

I entered the anime blogging sphere as a lurker around Spring 2008. We Remember Love is my first anime blog. Click here if this is your first time to visit WRL.
View all posts by ghostlightning →
This entry was posted in fanboy, first impressions and tagged ryusekei gakusaver, shooting star gakusaver. Bookmark the permalink.