The Many Ways Avatar: the Last Airbender Remembers Love For Anime

There’s a good reason that many people mistake Avatar: the Last Airbender for an anime, and it’s not just the stylized character designs and facial expressions (though those are a big part of it). In the past ten years, a number of Western cartoons have emerged that emulate those aspects of anime, but more often than not, they ultimately have more in common with other Western cartoons than Japanese ones. That isn’t true of Avatar—the series shows its influences proudly, and without a doubt, those influences are mostly anime. 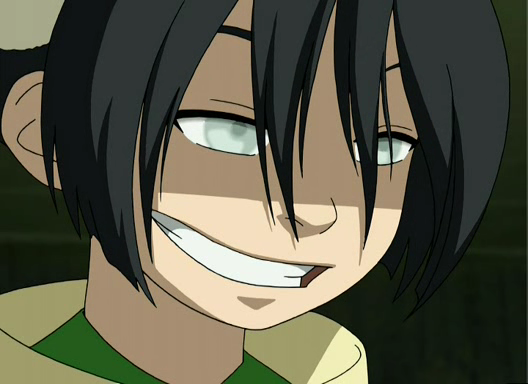 Unfortunately I didn't take screenshots and don't have the episodes, so I couldn't get shots for all of the scenes I'll mention. Instead, Toph.

Much like Teen Titans before it, which put a heavy layer of anime visual style over a Western comic book storytelling style (and arguably overdid it), the style of animation in Avatar is clearly influenced by FLCL. This is especially true in terms of facial expression, as Aang is known to break out a number of Naota’s unique facial masterpieces with pressing accuracy. Having seen FLCL at least 15 times, it was easy for me to pick out a lot of moments that emulated it. For some specific examples:

—There’s a scene in Avatar wherein Aang emulates the scene from episode five of FLCL when Naota is yelling at Mamimi on top of the giant hand. (Wish I’d written down the episode number; maybe a diehard fan will know and share it in the comments~)

—In the neighborhood of episode thirty-four or thirty-five of Avatar, Sokka plays out the scene from FLCL episode two wherein Haruko and Naota have a hyperactive dialog reflected in Canti’s TV-screen face. The scene in Avatar uses the same fish-eye perspective (just for the purpose of emulating this scene, which I love), and Sokka teleports around the room in the same way Haruko does. 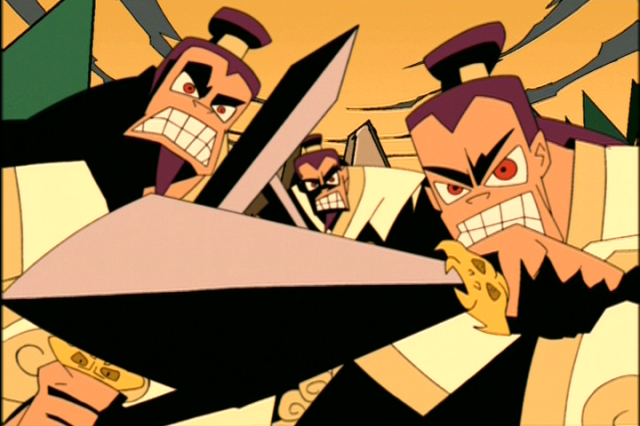 My favorite referential scene in the show wasn’t specifically an FLCL reference, but an homage to my favorite animator—who also animated my favorite scenes in FLCL and later directed Gurren Lagann and Panty & Stocking with Garterbelt—Imaishi Hiroyuki. This scene comes from episode eleven when the second of the feuding tribes is giving their story of how the feud began. The scene is done in Imaishi’s fast, frame-skipping style, with the heavily vibrant, contrasting colors that he’s best known for from Dead Leaves (which I’m betting is what the team would’ve watched to get the inspiration for that scene.) This segment was so uniquely Imaishi that I spent half an hour trying to figure out if he’d worked on the show, but it doesn’t seem to be the case. It’s just an incredibly spot-on homage.

But GAINAX people aren’t the only ones Avatar draws from. I couldn’t help but think of Avatar as “Nickelodeon’s version of a BONES anime” (albeit the one it reminded of most, FMA: Brotherhood, came out later), and I caught a couple of FullMetal Alchemist references in the show.

The biggest one is an excellent dramatic scene in episode thirty-one that happens to also exist in episode twenty-two of Fullmetal Alchemist. In the original, Edward Elric is doused in the liquid of an incomplete philosopher’s stone and explodes with power. His body starts glowing bright blue and the building around him is being destroyed by the power. Maria Ross ignores the danger and embraces Ed, calming him back down. 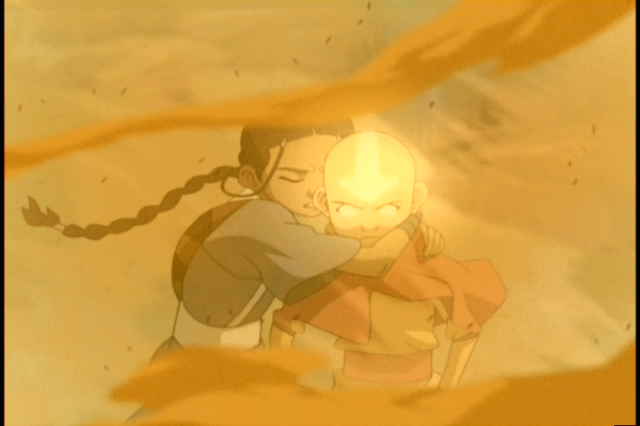 Perhaps as an afterthought to the fact that Aang’s Avatar State happens to glow bright blue and unleash a lot of destructive power, the scene was recreated when Aang found out that sand-bending bandits had sold Appa off to traders. Aang goes ballistic, achieves Avatar State, and wrecks a bunch of nearby stuff. Katara walks through his powers and embraces him just like Maria Ross did, and Aang finally calms down.

(I remember seeing a minor reference in the next episode as well, but I can’t remember what it was. This and part of the show where a lot of FLCL homages were clustered together in a few episodes lead me to think that someone on the staff had been rewatching those shows around the time they made those episodes.)

There are other minor anime details, but I don’t want to get into everything because some of it could truly be coincidence. (For instance, the collars on the Fire Kingdom official uniforms looked a lot like the collars on Zeon uniforms from Mobile Suit Gundam—but then uniforms only ever look so many ways.) Some general anime stylings such as fanservice (to the extent Nickelodeon allows) and mandatory beach episodes also showed up.

Having grown up with them and having friends and brothers that watch them, I see a decent number of Western cartoons, but even the ones that pull off a decent over-arching plot or load themselves with Japanese-looking style don’t really capture my interest. Avatar is the first Western cartoon that I liked just as much as one of my favorite anime, and all this remembering love for the medium gives me a good idea of why.

72 Responses to The Many Ways Avatar: the Last Airbender Remembers Love For Anime