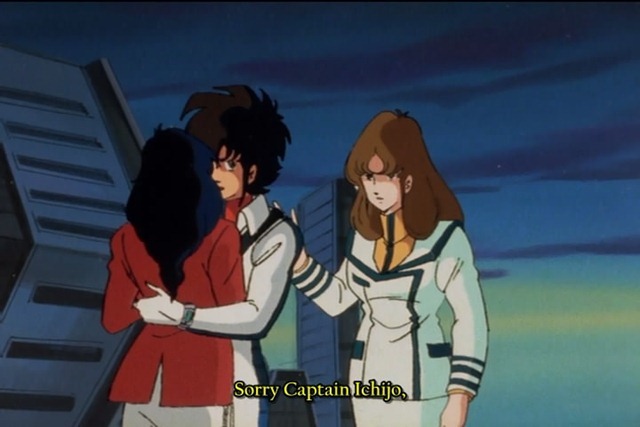 The show is deservedly praised for being one of the few narratives to boldly depict a post-war story where the war actually happened in the beginning of the narrative. But why? What’s really inside these episodes that extended this series beyond Misa and Hikaru dashing towards the Macross and the sunset?

What’s here is an extended account of failure from almost all sectors of the show: from the inability of the Zentraedi to integrate with human civilian life, from the arrogance of the humans in that they can just colonize the ‘cultureless’ Zentraedi with their Minmay mono-culture, from the opportunistic capitalist privateering of Kaifun in commodifying Minmay’s cultural cachet, from the discovery by the Zentraedi that they are but Satan’s Dolls – a genetically manufactured military sub-species of the Protoculture, from the slow decay and dissipation of both Zentraedi and human war potential (material resources), to…

…Kaifun putting an entire city at risk for petty ‘emancipation politics’ that he ultimately says “have nothing to do with us [Minmay],” to Kamujin using human-style hostage terrorist tactics (and being utterly fail at facing countermeasures), to Minmay’s inability to affect Kamujin and Lap’lamiz with ‘culture shock,’ to Minmay’s rapidly dissolving ability and motivation as a performer, to Kaifun’s response to Misa’s successful rescue operation, to Misa being a complete doormat for Hikaru and still unable to take charge of her own feelings, and to Hikaru OH MY GOD being an utter insensitive douchebag towards Misa.

Why? So much for ‘happily ever after’ bitches. Sure, SDF Macross is a flighty fantasy, but it really does indulge a whole lot of darkness and grimness in this stretch. True to form, against the backdrop of societal, galactic, and interracial/species conflict, it is the failures of human maturity that take the forefront in the story. We always knew that Misa was kind of fail – given her lack of personal strength and conviction involving Karl Riber mysteriously conflated with Lynn Kaifun, but here her wishy-washiness over Hikaru subjected us all to seeing her play victim to his moronic selfishness.

We’ve seen Hikaru fall from sympathetic victim of Minmay’s self-centeredness and utter lack of sense, to this incredible douchebag who clearly isn’t over Minmay and then takes Misa for granted in such a rude, insensitive, and annoyingly callous manner. This I believe has greatly shifted the matrix of heroism in some significant way: We now have Misa as the suffering heroine (formerly held by Hikaru), while Hikaru becomes the misguided hero that is both object of love and antagonist to Misa. The ominous thing is: HIS WORST HAS YET TO COME.

Minmay also is subjected to a fall. Her career is a mess. Her relationship with Kaifun is sick. She waffles between motivations for performing, and only now acknowledges her own feelings for Hikaru. I don’t buy it that she’s never had feelings for him up until now. She’s just never valued them as much as she does now. But she’s already this trainwreck, who surprisingly hasn’t turned to substance abuse the same way Kaifun has begun to. But then again, she’s being played up to be sympathetic by the story. This is the set up for the leveling of the love triangle just before the finale resolves it.

Outside the triangle, some interesting things have happened too:

A joint operation headed by Britai to secure the Zentraedi factory satellite is an utter joy to watch. Britai is, I believe, a far more capable combat commander than Global is. I feel that the very best of the Macross’ crew were put to incredible use by the able Britai. I can watch an entire series of him commanding a ship.

The Jenius family is genius: the show does not hold back with the slices of life after the great space war. Marriage and child-rearing suits both Max and Millya. Millya’s fish out of the water tactlessness is an endearing counterpoint to the cartoon-villain awkwardness of Lap’lamiz appropriating/making ‘culture’ with Kamujin, who she supposedly manipulates. Two things stand out in Millya as mother: the baby-toss across the room to Misa, then bringing her daughter Komillya not only in the front lines, but straight into a room full of hostile Zentraedi. Mind you she can’t pilot her VF while she’s holding up her daughter for everyone to see. Batshit insane, and awesomely so. Again, Max presents this solid togetherness as the counterpoint to Hikaru and his liquid mess of a loverboy in a love triangle.

I entered the anime blogging sphere as a lurker around Spring 2008. We Remember Love is my first anime blog. Click here if this is your first time to visit WRL.
View all posts by ghostlightning →
This entry was posted in analysis, SDF Macross and tagged Hikaru Ichijou, lynn minmay, macross, misa hayase, Post-war stories, SDF Macross, Zentraedi. Bookmark the permalink.