The Fourth of 6 Posts on Macross Frontier The Wings of Goodbye–Photoshop Frontier & The Rehabilitation of Grace, Alto & Ranka

Posted on November 2, 2011 by ghostlightning

We (the founders of We Remember Love) watched the culmination of the Macross Frontier saga together and in grand fashion: using an office board room and a high-end projector. It is only fitting, as the Macross Frontier sub-franchise is, and had always been the representative anime for this blog. Yes, our favorite show is Super Dimension Fortress Macross, but is Macross Frontier that remembers love, and is the show that in 2008, got us following anime blogs and finally start one ourselves.

The film version of the narrative did not only change key events from the TV series, it made big changes in the characters. In general, the changes are well-received and I personally am okay with them. I do have considerations and other thoughts though. By all means the three I mention here aren’t the only characters that have noteworthy changes, but these three are who I’ll focus on.

Grace ended up being very sympathetic and I accept these changes wholeheartedly. I do think, however that it happened suddenly and so close to the end and entirely due to a convenient contrivance: a physical module that controls her everything. Thoughts? Emotions? How does this work?

Her real self is trapped and imprisoned, a witness to her own manipulative actions. Can we say that her talent, creativity, and original thoughts are accessed wholesale by the Galactic villains via a physical implant?

How does one retain sanity after performing so many evil acts that are against one’s character? What is Sheryl’s relationship with this evil Grace? Sheryl truly went along with the Galaxy plot not questioning how Grace turned into this evil conspirator? Or, did she knew how something is up with the implants?

The film doesn’t bother with these complexities. What it wanted to do is for Sheryl and Grace to remember love also because it feels better that way. It feels good to imagine May’n & Kanno Yoko role play their relationship as they compose Sheryl’s music together.

Grace was consistently tender towards Sheryl in the film unlike her callous and bitch treatment of her in the series. It’s not too much of a stretch to think of this tenderness as a desirable trait that the Galactic villains want to keep. Brera had some of this towards Ranka but I don’t know how well thought-out this mind control business is. Leon got a reaction from Grace when he said that the Galaxy villains sold her out to keep their lives. Is this acting? I doubt it. I just don’t think the whole dynamic is well done at all. In any case I don’t mind too much.

Macross Frontier went for what feels good and POOF magic rehab. Evil technology can’t stop true friends from remembering love. And while they’re at it, they made her go out like a hero saving Sheryl firing a rifle while mutilated and perhaps more importantly, naked as fuck. That’s our Grace O’Connor alright. 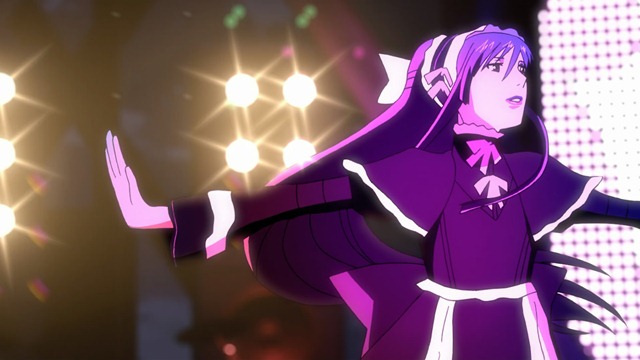 I’ve come to realize that Alto isn’t a popular character through my discussions with the very passionate fans who are also readers of WRL. I always liked the guy, finding him to be a nuanced take on the lead pilot hero type.

He wanted to fly more than anything (Ichijou, Dyson)
He was good at flying, but not necessarily fighting.
He didn’t mind having to fight though he’d rather not.
He was prepared to kill friends. (unlike Kira who freaked at killing enemies)
Gets shot down, loses his mecha in Phyrric wins. (Chirico Cuvie)
Isn’t the best pilot in the narrative. (Ichijou)
Does not out-pilot nor beat his rival in any way.

No one is quite like Alto and I love him for it. What changed in the film is he no longer has anti-Alien conversations (no more “there’s only space for one of our species in the galaxy thoughts”); a lot of his angry shouting is removed (especially towards Michel, who is completely a non-rival in any form now); he behaves a lot nicer to the girls; and how the acting he did as an Oyama went beyond something Michel teased him for into him questioning his gender identity. This is dumb.

It’s dumb not because it is out of character (and it is out of character since he equates female gender with femininity), but because it isn’t even actually gay. A homosexual Alto would explain his disinterest in the 2 idols. But he is asexual instead and/or relatable in terms of being a “too pure-pure boy.” This is relevant to Macross Frontier and not a judgment against people like Alto because this is a love story set against the backdrop of great battles.

Alto isn’t a loverboy. He’s the object being wooed. He doesn’t have any romance in him. Hikaru was a jerk and a douchebag but it is certain that he is into the women in his life. Alto, no.

It took the force of destiny to resolve Frontier’s love triangle. Alto never had to work for anything. When Alto chose the sky over the girls in the TV series, that was at least consistent with his character, his being (although he did give out some pity sex to a dying Sheryl, because she kind of reminded him of his dead mom LOL).

In the movies his flying obsession is diluted by this gender issue, which substituted the primacy of his running away from the familial destiny of Kabuki as with the TV series. In the films he’s very much at peace about leaving the family business.

THIS is what makes Alto more likable? SERIOUSLY? Don’t get me wrong I like film Alto just fine as I adore Sayonara no Tsubasa so much. But photoshopping Alto this way isn’t exactly “ideal” to me.

The most significant character with the most significant changes is Ranka, the third protagonist and the locus of much divisiveness during the TV series run. While Mylene Jenius is younger and portrayed in an equally if not more childish way, Macross 7 didn’t air in the internet age where opinions rage and blow like storms. Ranka appeared at the very height of moé being thought of a differentiator (as a value proposition) in a mainstream work. After Frontier (and Code Geass R2), moé is pretty mainstream and it’s no big deal to find elements of it in new mainstream works.

As such, I imagine, some older and more conservative (LOLOLOL) Macross fans did not welcome Ranka as a lead character. Add to this the inexperience of creators in integrating such a character in a more central role (Mylene wasn’t central to prevailing over the Protodevlin) and problems ensued. Some of the changes in the film can be read in this context.

Taller (better suited for symmetrical docking, albeit this fanservice never happened)
Responsible
Independent
Considerate
Didn’t make her life revolve around a person she just met and barely knew
Broke down less
A clearer relationship with her Vajra “heritage”
Wasn’t manipulated, and if people tried, she’d probably overcome them

Yes, the above list implies that the opposite was true for Ranka in the TV series (shorter, irresponsible, dependent, inconsiderate, made her life revolve around the guy she barely knew whose surname was, broke down more, “part” Vajra, and got played like an instrument). What was taken away from her worked out very well in my view:

Queen of the Vajra status (how that worked anyway is real dicey to me)
Goddess-mode powers (Vajra command, healing the V-type sickness)
Extreme/dramatized effects of the dissociative amnesia

All in all, especially considering how she manned-up (more than Alto ever did when it came to these things) and confessed to him knowing how doomed she is; how she went to work with her friends, in the context of a team to rescue Sheryl and save the day instead of going to the Vajra and warn them to stop the humans who are about to attack (don’t harm them of course! use your cannons to shoot lasers of love!); how she’s able to talk back to Alto; and ultimately with her role after the resolution of the triangle, Ranka’s had a major change for the better. By this I mean her character is much more ideal and heroic.

I do think she’s a lot less interesting however. Don’t get me wrong. I will be very clear here. I like photoshopped Ranka. I love this film and she’s a big, big part of what makes it work. The changes in her makes haters whine less, which is okay.

But I loved it that she was this idiot traitor. I love it how the TV series presented things in that: this is what happens when you pin your hopes to a moéblob. Granted, Macross Frontier is NOT Infinite Ryvius but man oh man Ranka’s role to play was perfect in my mind. It was a concentrated and more high-stakes level of Minmay failure (post-Space War I). I loved it how she failed so hard, and so often, and so utterly. This was genius.

BUT, instead of redemption through epiphany, Ranka was just given goddess powers and magicked her way into saving the day (and Sheryl too). This is what I hated about how the series handled her character. Instead of acknowledging how she left her people when they needed her there, and then promptly got herself captured and used as a superweapon against the humans; she gets rescued and gets to lecture everyone about the Vajra.

So if I had to choose, I’d pick photoshopped Ranka because a lot of what enraged me about her has to do with utter lack of follow-through and consistency. Movie Ranka is at least consistent throughout.

I mentioned these so I can have some order in the conversations to come.

I entered the anime blogging sphere as a lurker around Spring 2008. We Remember Love is my first anime blog. Click here if this is your first time to visit WRL.
View all posts by ghostlightning →
This entry was posted in analysis, Macross Frontier and tagged alto saotome, grace o'connor, macross, macross frontier, ranka lee, Sayonara no Tsubasa. Bookmark the permalink.

83 Responses to The Fourth of 6 Posts on Macross Frontier The Wings of Goodbye–Photoshop Frontier & The Rehabilitation of Grace, Alto & Ranka