Posted on November 23, 2011 by ghostlightning

The sound of the war cry heard from Loni’s lips elicit a far, far different feeling from that of Gihren Zabi. How different? Gihren was rousing the troops and attempting to fill his enemies with fear. Loni sounds like she’s convincing herself of something.

There is a profound difference in how the Universal Century OVAs portrayed the Zeon. After the release of Char’s Counterattack, Zeon as an idea or movement was bankrupt. Zeon was defeated, its greatest hero proven to be a shameless joke. Zeon was truly exhausted.

All the OVAs set in the Universal Century suddenly, but inevitably, and persistently portrayed Zeon elements sympathetically; with rich pathos. There was not only this feeling of connecting with the damned, as all the Zeon were, but also this nostalgia for this time, this One Year War when they were feared, when they had this illusion of strength.

If not this, the stories are the “heroic” attempts at vengeance if not redemption. The story of Operation Stardust is one such tale, and the narrative of the Sleeves is another, albeit it is difficult to tag it simplistically due to the involvement of Full Frontal who seems every bit as selfish and untrustworthy as Char when he led the 2nd Neo Zeon movement.

Throughout Banagher’s exposure to the Zeon in Palau, and now with the behavior of the Zeon remnants on Earth, we see this pathos and despair rise up and burst like a lanced boil. It is like a disease, this resentment, self-righteous victimhood, and thirst for revenge; now long festering after missing out on both Neo Zeon conflagrations. You just knew they were doomed. They knew they were doomed. They just wanted to strike. Full Frontal roused them, then got out of their way. Bastard.

I remember Ghineas Sahalin, and Char himself. I remember how Char put Quess Paraya in the Alpha Azieru. It was never going to change the war the way Ghineas deluded himself that the Apsalas would, the way Dozle Zabi thought mass producing the Big Zam would. Loni in the Shambla was a pawn that reached the opposite end of the board but was made rook instead of queen.

Sacrificed with the rest, ghosts and remnants of what was this ideal that was less a lifeline but more a noose for the oppressed and embittered spacenoids of the Universal Century.

But even if Loni in the Shambla with its rogue psycommu was the focal point, the main symbol of the tragedy of post-Char Zeon. The tragedy and despair is really felt from, or communicated through the inevitability of failure in the words, thoughts, and actions of the supporting cast… The “common” soldiers of Zeon.

This was so powerful in War in the Pocket …with the Cyclops Team, with Bernie Wiseman himself; and almost just as much in The 08th MS Team, in Norris Packard. Here in Unicorn 04, aptly titled “At The Bottom of The Gravity Well” there are few named characters but what moments there are, speak volumes. How?

It’s how the Zeon are punished by Londo Bell. The rout was as one-sided as anything in Gundam. The remnants scored decisively against the garrison forces with their equally ancient mobile suits, but when the crack Londo Bell forces arrived they were ripped to shreds, most notably by this ace in a Byalant who could have been Kamille Bidan or Amuro himself the way he shot down so many suits, ancient as they were.

The Zeon soldiers in Mobile Suit Gundam had the look of cartoon villains. This would be true of Tomino Gundam up until ZZ Gundam. By the time the OVAs were made the Zeon soldiers looked like human beings. This is on purpose, and consistent with the sympathetic portrayal of the Zeon soldiers as doomed by their leaders, and cursed by history. 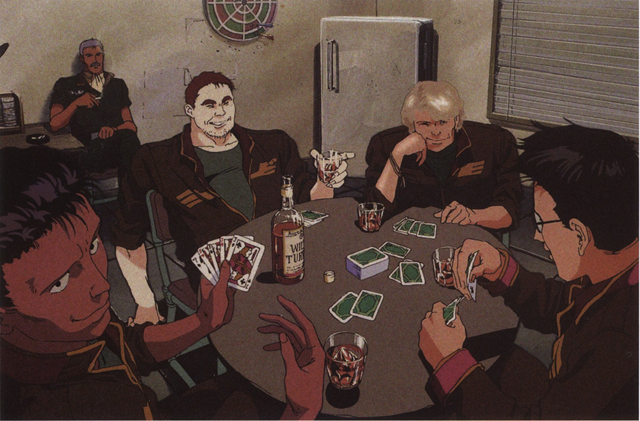 This is not to absolve them of wrongdoing or deny the atrocities they are responsible for. This is but the enrichment of the narrative, the addition of more colorful threads in the tapestry of the Zeon wars with the Earth Federation.

So here are the Remnants of the One Year War, the likes of those who died or surrendered after sending Anavel Gato and the Zephyrantes Gundam to space. These remnants have endured untold privations, and suffered the indignity of missing out on both Neo Zeon wars. And they respond to the call to arms with such emotion. I swear the reaction of one of the commanders is one of my most favorite moments in Gundam. The punch-to-palm thing he did, just says it all, all of it.

I have no agreement to offer them, no lasting empathy for their cause, but for how they went down fighting, against superior opponents. I offer them a meaningless salute.

1. Sermon From The (Mobile) Suit
2. The Despair of Zeon [You are reading this now]
3. The Eternal Captain: Bright Noa