Posted on January 7, 2012 by JoeAnimated 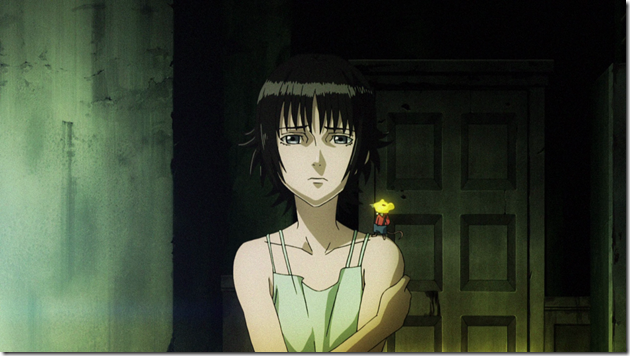 ghostlightning: Allow me to introduce Joe Animated, who wrote this post. He has more kids than I do, but I have more blog posts than he has. We both have to start somewhere, so please welcome him and his first blog post here on WRL.

Mardock Scramble: The First Compression is the initial release in a three part movie series. Set in a futuristic world,  the protagonist, is given a second chance by an “ambulance chasing” scientist and his partner, and intelligent synthetic life-form. As like Blade Runner, a path of discovery into humanity and human nature is walked. It’s this that makes Mardock Scramble more than just a pretty science fiction story.

The main character is Rune Balot, a teenage prostitute. Balot is a troubled, frightened teenager. She has experienced some horrific events in her life, starting with her rape by her father while in her early teens, followed by the attempted murder of her father by her older brother. With these

traumatizing events in hand, she is left to the streets, ending up as a prostitute at a brothel. As if her life has not reach rock bottom already, she meets her endgame in Shell, a deranged psychopath bent on killing her and turning her ashes into a diamond for a new ring on his finger. In this murder  attempt she is left for dead dead, and subsequently rescued, and her second chance at life begins.
It is with these rescuers that she begins her struggle to find meaning in her life. As a part of her body’s physical reconstruction, she is remade as a cyborg, with the ability to interface with the technology around her. This new body grants her a physical strength she has never known. But this alone is not enough to help her heal completely. It’s her conversations with the synthetic life-form Oeufcoque that her emotional healing begins.

Oeufcoque is a truly unique creature. Created by a space science program as a synthetic lifeform, he has the ability to transform into any item imaginable. He can quickly change with the users

thoughts, becoming an indispensable tool. Oeufcoque’s character mirrors that of the Replicants in Blade Runner. The Replicants are not supposed to be free or equal to man. But their creators gave  them the ability to reason, and the beginnings of a conscienceness. Because of this, the Replicants grew beyond their programming, bringing them closer to being human. Given the intelligence and emotion of a sentient being, but only granted the rights of a machine, he tries to find his place in the world. In the commonality of their struggles, Balot and Oeufcoque find that they share a similarity in being used by the society they live in.

But unlike Blade Runner, Balot and Oeufocoque are looking for what makes them human, but what defines their value in society. For some time now Balot’s worth was defined by what actions would do for money. After encountering a hidden camera in bathroom stall, she’s forced to think in those terms again. She’s irritated, frustrated, embarrassed. In her not so past life, she would know exactly how much money to make to appear on camera. This reminder, and the self exploration, only helps to push her growth along.

But just as she confronts her past and makes strides to move beyond it, it comes back to take her away. A gang of assassins hired by Shell comes to kill her. The members of the assassination team represent the aspects of her that her client’s fantasized after. This attempt on her life serves as a test of her resolve to change, in a way in which there is no going back. She must either fight her demons, or succumb, and the process, lose her life.

With her new found resolve and Oeufcoque, she dismantles the assassins one by one. Oeufcoque 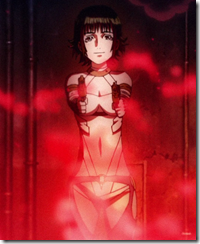 lends his strength as she methodically eliminates each threat. But this strength leads her down the dark path of revenge and hate, and with consequences. As she defeats her last demon, she transition from justice to revenge, destroying the bond between her and Oeufcoque, mortally wounding him in the process.

For the designers of Oeufcoque built in safeguards to prevent the senseless murder of humans. With Oeufcoque injured and hardly functioning, the last assassin, hired by Shell, begins to attack. As much as this assassin is after Balot, he want to take control of Oeufcoque. But when the time comes for her to help Oeufcoque, she can’t. They try to struggle together, but to no avail. At this point, the movie ends inconclusively, leaving us without a conclusion.
Does she survive? What happens to Oeufcoque? Mardock Scramble: First Compression, brings us the first part of a compelling story, that when complete, will rival the best stories science fiction has to offer. I for one am anxious to see this story to it’s conclusion.

-Growing Older, but never growing up. Father, engineer, and all around nerd. Grew up watching the great american cartoons of the 80's, now a casual watcher of Japanese Anime.
View all posts by JoeAnimated →
This entry was posted in analysis, comparative, today's special guest writer and tagged Mardock Scramble. Bookmark the permalink.

12 Responses to Humanity in Mardock Scramble