Like GL, I’m a father with three young kids, in particular, two young girls. In the last couple of years, as a causal form I’ve entertainment, I’ve taken a stronger interest in watching anime. My only real exposure in the past were shows on Cartoon Network, during the Toonami time slot or Adult Swim. During this exploration of new and old shows, my kids started joining me in watching, wondering what strange cartoons I was watching.  Being ages 7, 4, and 2, they have differing amount of interest in types of shows. But the one that surprises me the most is my 4 year old daughter.

Now keep in mind, no one in my family speaks or reads Japanese. My wife, genetically Korean but raised by a WASP family here, does speak Spanish, but that’s as close as we get. My oldest daughter is just beginning to learn to read. So you would think watching a subtitled show in a foreign language would be a little hard for a four year old. But every week she wants to sit down with Dad

and “watch a show”. But, what really got her hooked, was watching Bunny Drop (Usagi Drop) this last summer. It became our Sunday ritual to watch together.

And what a fun show to watch together. A soft, and loving premise written around a working man, and the young girl he adopts into his home. I’m not saying my family situation is the same. But I see the interactions between a father and daughter in our own life. Together, we match up to there ages pretty well. Me, a working Dad, and Rin, a pre-school aged girl.

Fortunately, it doesn’t take a lot of dialog to understand the generality of what’s going on. So, she watches intently, making cute comments as Rin does silly stuff, and giggling at the more comical situations. These moments make the experience of watching the show 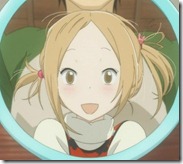 all that more enjoyable. I’ve found something in common with my daughter that is just for us, an activity that she solely comes to me for and not Mom.

And as the season closed, it has hard to tell her that their would be no more to watch. And of course, she doesn’t understand why. But as I make my way through shows new and old, she’s there enjoying them as well, my little anime watching sidekick.

And a question for you as you read his post. What would you recommend I watch next with her? What can we watch together that can continue this great experience so far?

-Growing Older, but never growing up. Father, engineer, and all around nerd. Grew up watching the great american cartoons of the 80's, now a casual watcher of Japanese Anime.
View all posts by JoeAnimated →
This entry was posted in moments in anime, moments of 2011, today's special guest writer, Uncategorized and tagged Bunny Drop, Usagi Drop. Bookmark the permalink.