Posted on January 29, 2012 by ghostlightning

Several things strike me about this session.

Even during the flashback, the characters were already old, or rather at the prime of their respective detective and criminal careers. The episode itself felt old, film noir old, so old that Faye asking Jet about growing his arm back at the beginning of the episode got her a very (grouchy) old man response.

2. It is musically stark.

A typical session has around 3-5 pieces between the credits. Sometimes the pieces are repeats from previous episodes, sometimes for just a few bars. Check out the track list for this episode:

It’s really just Cosmos and Farewell Blues ain’t it? Why? Why is Jet’s story so quiet? Why deny it even the sad notes? Compare it with the song list from “Sympathy With the Devil.” You’ll find it pretty bare. “Ganymede Elegy” was pretty soulful for Jet, this one had nothing… a past that catches up with him not to free him, but just to put into order the people he’s killed off in his heart… with their respective deaths.

There are lots of clips, and from original recordings too, but I liked this rendition and find affinity with its amateur nature.

This is different from Led Zeppelin’s and probably far closer to the mark for Jet Black.

I actually enjoyed this cheesy film and loved how this session referenced it. Cowboy Bebop sometimes takes one aspect of the source and distills it, framing the allusion into a limited set of meanings. In this case, it’s just Udai Taxim being a badass beyond anyone’s level among the convicts. And quite unlike Cyrus “The Virus,” his story is of a bitter kind of tragic (as opposed to a Jerry Bruckheimer produced villainous comeuppance).

The world had moved on without Udai. His gang have sold him out, and his information he intended to use against them has grown stale. He’s still dangerous, but no longer someone who makes a difference in this world.

Such a man is the kind that meets his end among deadbeat detectives and down-on-their-luck bounty hunters. 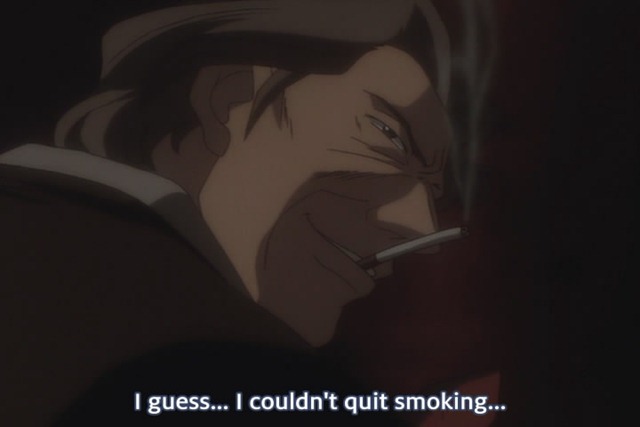 So now we know how Jet lost his arm, and how the truth of the story is met with the death of the big reveal. Fad let Jet kill him while pretending to attack. Does Fad’s death win him redemption? I don’t know, but it was sure as hell a manly way to die, after living a life of a weasel all these years. And Jet lets the guy who would quit smoking for all of 10 days smoke one for the road. And that’s a manly thing to do.

I entered the anime blogging sphere as a lurker around Spring 2008. We Remember Love is my first anime blog. Click here if this is your first time to visit WRL.
View all posts by ghostlightning →
This entry was posted in Cowboy Bebop and tagged Black Dog Blues, Con Air, Jet Black. Bookmark the permalink.