Whisper of The Heart is My New Favorite Romance

Posted on February 14, 2012 by ghostlightning

If you have not seen this film by Studio Ghibli, this blog post is not for you. Spoilers abound after the jump.

I made a heartfelt request for recommendations of anime love stories and/or romances a year ago, and I’m completely aghast that no one recommended Whisper of the Heart to me. Not a one. Well, it’s not like everyone who had a wide experience of viewing anime actually participated in the discussion, but it was a fairly good discussion as far as blog posts go.

For those who haven’t seen the film yet persist to read, suffice it to say that I recommend it wholeheartedly. It has the hand-crafted Ghibli animation magic that even in aged, un-remastered, standard definition .avi encoded viewing, rivals and perhaps surpasses peaceful, urban/suburban set juggernauts such as The Girl Who Leapt Through Time, 5cm/second, and The Disappearance of Haruhi Suzumiya. And as love stories go {and yes Disappearance is a (harem) love story}, it exceeds them by far in my romantic, shounen heart. Watch the film.

For those who have, let us celebrate Valentine’s Day with some Ghibli love. 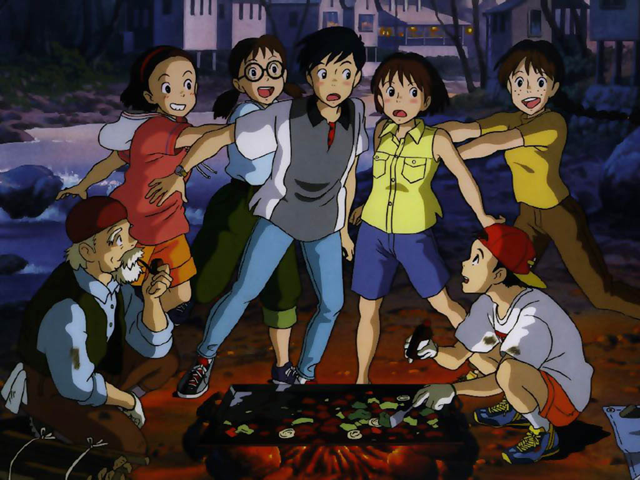 The whole film is filled with quiet goodness, but there are two scenes that really, really took my breath away. The first is the impromptu jam session.

Shizuku at this point had two attractions, the first is for this mysterious Amasawa Seiji – a name that has appeared in the library card log of every book Shizuku has borrowed. She romanticized this character, as someone who must be quiet, reserved, and deep, to have read all those books. The other attraction is for this tall boy who picks on her. We know she’s attracted because she goes out of her way to see him, and more importantly, she’s turned down an admirer without specifying whether she likes someone else. That’s the dead giveaway.

But she doesn’t know they’re the same guy… and now, she’s softening up the harsh image of this tall boy who picks on her, asking about his violin crafting hobby, and begging for a performance. Of course he obliges, with the condition that she sings along. Readers, this kind of musical set-piece, is my favorite kind of scene¹ wherein there is a definite milestone in the romance. It won’t be spelled out yet, that will come later, but as a viewer, you’ll definitely know.

Just when you think it can’t get better, the old artisan arrives with his musician friends after delivering the most delightful clock I’ve ever seen in a film, and I initially thought they’d be there to just witness the love story bud. But no, that would be what a lesser film or show would do, complete with embarrassed looks and what not. This film went all out. The interlopers became part of the musical performance, and elevated the scene to the upper echelons of my regard.

Why  do I love this kind of scene? The set-piece nature reminds me how much of a fantasy the narrative is. It reminds me that it is a film, this isn’t real, but how lovely it is as crafted work: “LISTEN TO MY SONG!” This right now is when the kids fall in love and they don’t even know it, and this is when you know you’re in love with me too. Love, Whisper of the Heart.

But to fall in love is one thing, albeit this is what’s celebrated on Valentine’s Day. What keeps it being celebrated is the relationships moving forward, staying together. How does this film hold me in that regard. The second scene, is that of the ending. That marriage proposal that came from nowhere, them being in middle school, but given what we’ve come to know about Shizuku and Seiji, makes all the sense in romance.

Before we dismiss it as romantic fantasy outright, allow me to say this: I proposed to my now wife of five years and mother of my daughter on our second date. She didn’t say yes then2, but I had known her about as much time as Seiji has known Shizuku up close; and less if we factor in how long he’s been stalking her. This is why this scene makes so much sense to me. When you choose someone, you just do.

The last thing I want to comment on is, how a romantic partner can inspire us to go beyond ourselves. When I knew I wanted to marry my now wife, I set aside my aspirations in being a writer and artist and set out to find corporate employment. I was successful at this and we had our big ‘ol wedding. For her, anything. It’s not like I’ll never write – I wrote more since I met her than I ever have in my life. Lightning strike me down if I say whatever writing I do does not gratify and fulfill me. Whisper of the Heart is the anime that made me want to be the little girl. There’s nothing that says Shizuku wouldn’t find more fulfillment as a writer than Seiji will as a violin craftsman, just as I know I’m fulfilled as a husband and father (who happens to write, work in a corporation, and make entrepreneurial ventures) as much as she is as a wife and mother (who happens to practice law and serve in the military).

Whisper of the Heart is my new favorite romance because it reminds me of how fantastic the romance in my own life is.

¹The other similar scene is from the anime Beck: Mongolian Chop Squad wherein Maho and Koyuki sing together in the neighborhood cultural festival for a band of fogeys. It was serendipitous as well, and just like Shizuku here in Whispers, Koyuki would fall in love with Maho in this scene.

2She proposed to me later on. Of course I said yes LOL.

I entered the anime blogging sphere as a lurker around Spring 2008. We Remember Love is my first anime blog. Click here if this is your first time to visit WRL.
View all posts by ghostlightning →
This entry was posted in Valentine's Day and tagged Ghibli, Whisper of the Heart. Bookmark the permalink.