With spring comes renewed energy. New love is often associated with spring. My wife and I met in April. And this spring anime season has brought with it three love stories. And by no means are they typical love; Zombies, Ghosts, Drool. Mysterious Girlfriend X is a story about the bond that forms between two people. There is a simple innocent love in this show that anime needs. And it starts with drool.

The Indirect Kiss. Where a glass, pop can, or similar object that has touched one’s lips is shared with someone of the opposite sex. An anime trope that continually lives on. But what is on that shared medium? Drool. Plain old saliva. The stuff that, when engaged in a passionate kiss, is shared between two people. An exchange is made not only in saliva, but in emotions. But I’m getting ahead of myself. 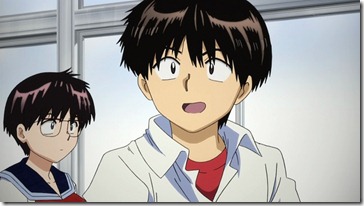 Tsubaki is just a normal high school kid. At least until a new transfer student joins the class. Urabe is a quiet girl, and with a few strange actions, alienates herself from the rest of the class. Tsubaki thinks nothing of her until one afternoon he finds her alone, sleeping at her desk when it’s time to go home. After quite a bit of urging, he manages to wake her up. The cute look on her face shocks him. And after she leaves, he looks down on her desk, and finds a small puddle of drool. Now, most common sense would tell you to move on, but what does he do? Curiosity has led people to do strange things.

The moment he tastes that drool, that “indirect kiss” has been made. These two have shared something. All Tsubaki can think is “It tastes sweet”. Isn’t that how love is when it starts out? Some sort of initial infatuation leads to a pleasant feeling. The idea that something about that person is appealing, and maybe I want more it. But for Tsubaki, what he doesn’t know is that he has unknowingly made a connection that he doesn’t know about. A few days later, he comes down with a cold. But, a visit from his Urabe clears things up. He is suffering from withdrawal, but with one quick swapping of drool, his love sickness is gone. He accuses her of giving him a chemical or or bacteria, that makes him addicted to her bacteria. After her laughter subsides, she explains that his body ached for more saliva from the girl he loves.

Isn’t that how love should be? That initial infatuation should leave you wanting more. You should want to find out what it is that makes that other person so compelling on first glance. So this time, Urabe has healed his “love sickness” with a quick dose of drool, But what’s next? How does infatuation change into a relationship?  So the next day afterschool, who is waiting for him? Together, they take quiet walk. And when it’s time to go separate ways, he get’s his daily dose of drool. But this routine does only one thing for Tsubaki; it confirms that he does love her. The awkwardness of his confession comes with an initial reaction. And only after he gives up on his past infatuation does she accept his proposal. You can’t enter into a new relationship when bringing in the baggage of the old. 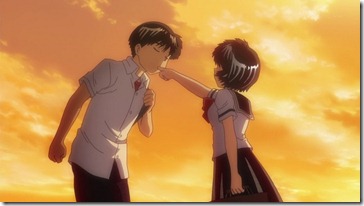 Love is in the air. Sometimes, it just takes a stranger route than others. 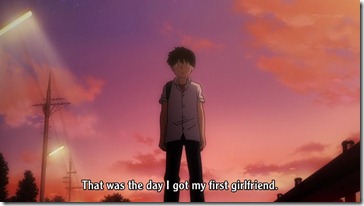 -Growing Older, but never growing up. Father, engineer, and all around nerd. Grew up watching the great american cartoons of the 80's, now a casual watcher of Japanese Anime.
View all posts by JoeAnimated →
This entry was posted in analysis, fanboy, first impressions, Mysterious Girlfriend X and tagged Drool, love, manga, Mysterious Girlfriend X, Nazo no Kanojo X. Bookmark the permalink.