You Want a Piece of Me? – Eureka seveN AO Episode 4

So the opening arc comes to an end. You know I like my four episode opening structures. While this one isn’t as in your face as most shows, it does introduces us to a large scope of the world in which the show takes place. Through these last four episodes, we have encountered a range of people and politics, that at some point, will play into our protagonists decisions. And on that note, let’s look into what this week has brought us. 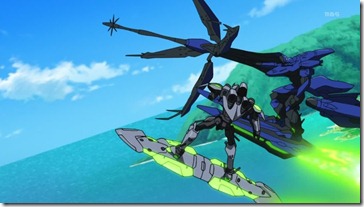 Origin of the IFOs

We begin this episode were we left off in the last, with Generation Bleu racing to fight the Secret, and Ao determined to do his part as well. As Ao races to combat, Ivica of GB decides to help Ao,and has Fleur intercept him before he gets himself killed. Fleur and Ivica bring Ao to his senses, and put a plan together to combat the Secret. As Ao takes off, he is “re-armed” by the Triton.  The dialog here is interesting; we learn that all IFO designs are derived from the Mark I/Nirvash. so in this timeline/world, the technology behind LFOs was lost or never developed. It just leads to more speculation about where all this fits in the E7 world.

You Can Mine the Scub Coral for Trapars

In Eureka Seven, as a result of the Scub Coral covering the planet, the atmosphere is permeated by an energy known as Transparence Light Particles, or Trapars. These trapars allow a sort of surfing on air, and movement much like a snowboarder would use. But in this world, we find that the scub coral are mined, and that their these energy is harvested for use in vehicles. Seeing as how this world is not densly packed with scub coral, you would think it would be impossible to ride the trapars without it. But it appears that by mining the essence of it, you can put that ability into vehicles. How this will play out should be interesting. 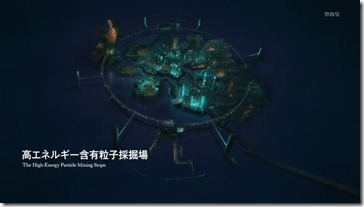 In the End, Decisions Have to be Made

When all is said and done, Ao has to make a choice. For the last few days, he has seen almost every political and emotional side to the arrival of the Scub Coral. There are people who will hate you, love you, and want to use you. As a kid in junior high, this has got to be a lot of weight to carry. Generation Bleu makes it’s decision to bring Ao into the team. With a little help from Ivica and Noah, Ao decides that joining them is the right choice. With a tearful goodbye from Naru, Ao is on his way, and now we can get to the meat of the story.

This week brought us a couple of tidbits that fans were sure to enjoy. The first occurred during Ao’s trip to the City. Here, encounters a Woodstock like protest, complete with music and pamphlets. But if you look closely at the backdrop to the band, you’ll see a great reference to the Gekko State. Would this be our alternate world rebels ready to throw off the tyranny of the man?

Then in the opening, we see a slight change, where they put a shadowy image of Eureka in the foreground. As we progress to the end of the story, we see Ao’s desire to chase after his mother and find her, to be reunited and understand why she left so long ago.

And of course, we all know who the real star of the show is:

Man, this show is made of goodness. It clearly makes a distinction between “pilot who manages to eliminate alien sentient monsters” and “ace pilots.” Ao is the former, and is otherwise clearly a n00b who can’t possibly survive actual dogfights. Perfection.

19 Responses to You Want a Piece of Me? – Eureka seveN AO Episode 4