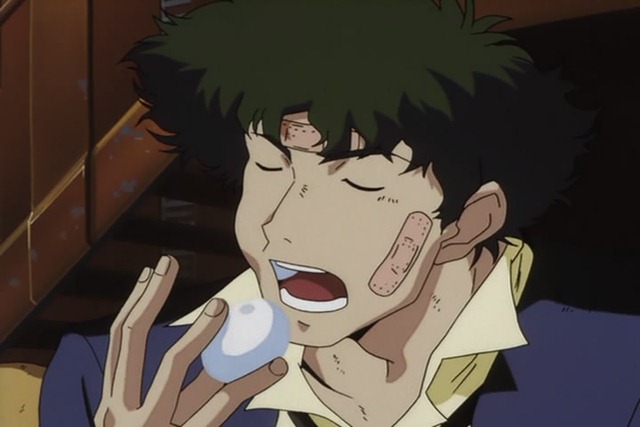 In  some ways, I think this episode is the finale and “The Real Folk Blues” two-parter is but a denouement. At the very least, the idea of “Cowboys on the Bebop” ends here. This is the last bounty they hunt, and fail at turning into money. After this they are no longer Cowboys on Jet’s ship, just flotsam in the post-Earth solar system.

I’m not going to talk about Faye anymore in this post. She’ll come up again more interestingly in “The Real Folk Blues” especially in the context of Julia (and Spike) but everything else I’ve endeavored to speak into in the very first piece of anime blogging I ever did in this life, almost four years ago Hard Luck Woman.

Instead I’ll write about Spike, who, interestingly enough has been a rare subject for me to cover. I don’t really believe I’ve said anything substantial about him, and I endeavor to change this here. I think I figured things out after finally watching the film that was referenced in this episode, 1967’s Cool Hand Luke.

I found it incredibly interesting how Luke, brilliantly played by the late Paul Newman, is considered one of the greatest heroes in American cinema. Really? Luke was an aimless, but self-possessed decorated WW2 veteran who got himself a 2 year term in a Florida chain gang (some kind of penal colony). He was this everyman that was ground under the heel of the penitentiary, but is otherwise ignoble; had no aspirations nor hopes in life, and is even disdainful of the people who surround him no matter how amiable.

This got me thinking about Spike himself, and if there was anything between this film and Cowboy Bebop beyond the baskets of eggs Spike and Jet ingested during Ed’s farewell montage. Luckily for me, some people already put these thoughts into words:

Let me put it this way. He’s not a terrible person, necessarily. He’s just afflicted by the kind of bitterness you can only really experience when you’re young, bitterness born of the conviction that things can never again be as good as they were Back When (compare/contrast Jet’s bitterness, the self-deprecating bitterness of an old man). Unfortunately this is a self-fulfilling prophecy; you certainly won’t find things that make you happy if you don’t look for them. And Spike’s is an egregious case. He fails to see potential sources of happiness in the present, and when he charges headlong at his past, he demonstrates a blindness or ambivalence toward all the bad things he left behind, things he’d really be better off without.

Pontifus, (Cowboy Bebop 20-26) A portrait of the Spiegel as a young Spiegel

Pontifus arrives at this conclusion most notably after considering Spike’s actions in the face of Vincent Volaju’s attempted mass murder. I’m not wholly behind his take on Spike’s apparent lack of caring – Spike after all assisted Elektra in getting the vaccine. After that he let others take care of things as he had a date with Vincent. A hero’s hero will take point on saving the populace, but either Spike’s trust in everyone else is to be acknowledged, or he just felt he no longer had any responsibility after doing his part. 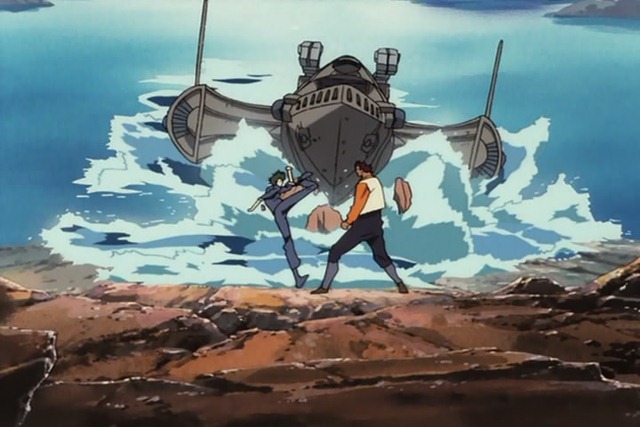 It’s also interesting how Pierrot Le Fou was the last “villain” he bested, the way he beat the likes of Asimov Sorensen. He didn’t beat Andy. He didn’t beat Vincent. He certainly didn’t beat Ed’s dad. Spike was in a slump! Only Vicious remained. We now have a hero who not only wasn’t wholly on the side of the angels, but also wasn’t much of a winner. Spike is indeed very interesting, given how his appeal is something closer to that of a hero’s hero despite being close to a complete opposite without being malicious.

There had been anti-heroes in the movies before, but they were really heroes in disguise. The audience identified with them even though they were on the wrong side of the law, were unwashed, had rotten luck, were physically repugnant or were just plain bad guys[…]

The bad guys in his movies don’t like that, and so they try to break him. And he fights back, no matter how much it hurts. If the characters he has played stopped there, they would be more or less conventional heroes. But they don’t. Although they exhibit heroic stubbornness and integrity, they’re not very likable.

For on thing, they’re loners. For another, they don’t seem to have basic human feelings. They do rotten things and don’t fell bad. They’re cold and aloof, and their enemies are usually fairly average people, with a sense of humor. People just like us[…]

He smiled at the idiots who were crossing him. He didn’t care what people thought. And a subtle change took place: The hero stopped wanting to be a hero[…]

Newman brings this character to the end of its logical development, playing a hero who becomes an anti-hero because he despises the slobs who worship him. Luke is on a Southern chain gang. He’s the only prisoner with guts enough to talk back to the bosses and the only one with nerve enough to escape.

He begins the movie as a likable enough guy, always smiling, always ready for a little fun. He eats 50 hard-boiled eggs on a bet and collects all the money in the camp. That Luke, he’s a cool hand[…]

A desperate, discouraged man who despises his admirers and will no longer pay the price necessary to entertain them.

The movie hero used to be an inspiration, but recently he has become a substitute. We no longer want to be heroes ourselves, but we want to know that heroes are on the job in case we ever need one. This has resulted in an interesting flip-flop of stereotypes.

Used to be the anti-hero was a bad guy we secretly liked[…] [And now] we get a good guy who becomes a bad guy because he doesn’t like us.

I think it’s fair to view Spike under this lens. Spike doesn’t do things for you and me. Remember how in Knockin’ on Heaven’s Door he apologized to the hostage that he isn’t a cop who would be threatened by the gun pointed at a non-combatant’s head. It was a clumsy set-up of characterization that they were (amoral) bounty-hunters, and it wasn’t wholly authentic. But there’s still meaning in it. Spike doesn’t really care. When he does, people die (“Waltz for Venus”).

This is Spike: a guy who hates annoying women, kids, and small animals. However, he’s a softie. This makes him endearing, it makes him “human” (read: “a good person” for the moralists); it makes him moé. You ask him to be his friend and he’ll give you a cold shoulder, but when he sees you down on your luck he’ll be the first to offer you a cigarette. UGUU~

It’s enough to make us care, it’s enough for us to feel good when Ed left him the pinwheel – not Jet, who really deserves more affection from anyone in this ship of fools. This totally makes sense to us, because we like Spike to some degree. We may respect Jet, but it’s Spike whose story we want to follow, the guy who’s kept us entertained.

And when we start hearing “The Real Folk Blues,” it’s his pain we feel, and all our well wishes we send uselessly to him as he heads to his doom.

I entered the anime blogging sphere as a lurker around Spring 2008. We Remember Love is my first anime blog. Click here if this is your first time to visit WRL.
View all posts by ghostlightning →
This entry was posted in Cowboy Bebop and tagged Cool Hand Luke, cowboy bebop, Paul Newman, spike spiegel. Bookmark the permalink.