Just Who Are You? – Eureka Seven AO Episode 11 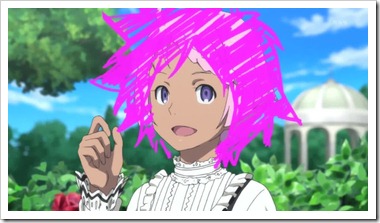 [Full disclosure: I’m listening to the Eureka seveN AO Soundtrack as I write this post. Definitely a fantastic mix of styles and sounds]

Elena has been one of my favorite characters from the start. From singing karaoke, to a cat themed school bathing suit, her random quirkiness adds a spark to the Pied Piper team. But who is she? As we speculated early on, is there some sort of relationship between her and Miller? Are they really the same person? I’m glad we’re done for now with building the world, and starting to understand it’s players more. Oh, the things this episode shows us.

Getting to the truth of things has become the mission of Gazelle and friends. They have become the personal investigation team for Generation Bleu. They’re task this week is to figure out what the relationship is between Elena and Miller. They travel to England, to see where Miller got her big break. They go to America, where they find the ‘special’ orphanage that Elena was in discovered in. All leading to the conclusion that they are, in fact, two different people. As as Bleu has already figured out, Miller was a spy for the American’s, but they don’t understand the link between here an Elena. Not even the American’s, who hired Miller, understand what’s going on.

As the kids retrieve the core of the Scub, they pick up some trapar infused particles that look like sand, which have the ability to induce hallucinations in the pilots of the IFO’s. This trapar infused sand only infects minds of children who grew up in trapar-intense areas. Apparently, growing up in such places induces changes in a child’s brain. These changes are what make children able to pilot an IFO. The orphanage that Elena was found in was a special place for children like that to be experimented on. Who knows what that has done to her mental state. But when the trapar sand infects Elena, her hallucinations become all to real. Her flashback brings her to the arms of Eureka, and we get a fast set of images of the Eureka seveN world we are all familiar with. And as quickly as those images flash by, we’re brought back to the ‘present’.

This dream sequence lets us see what this trapar sand is really capable of. The hallucinations created bring out what the person’s most desires or has the strongest memories of. Team Goldilocks get’s into their IFO’s in attempt for each of them to catch theirs. Elena’s schizophrenia is so strong, that it manifests itself in the sand, bringing a clone of Miller out.   And when Elena infects Ao, they begin to experience the same hallucination.  This could be for two reasons: the two of them have the strongest affinity to trapar particles, and they both share a common memory of a wonderful place. Their hallucination takes the both of them back to Iwato Island, the home of Ao. Does this mean that Eureka has something to do with both Ao and Elena? What is it that ties them together?

During the treatment of Fleur, we get a little more information about the trapar sand. Not only is it infused, but each particle may in fact be a miniature Secret. So when the sand manifests itself as Miller, are we seeing Elena’s thoughts, or the Secret’s? This becomes important, as ‘Miller’ says that this world is not real, that Ao’s and Elena’s world is outside of this one. The head tricks that the BONES and the director are doing is mind boggling. But, with the Eureka flashback, and this sequence, we really begin to see that this just might be a alternate world sequel. As to what the truth is behind this, is yet to be seen.

As we finish this episode, we find Elena’s old nanny. She’s tells a heartbreaking story of Elena dying five years earlier. So, will the real Elena Peoples please stand up?

10 Responses to Just Who Are You? – Eureka Seven AO Episode 11