Rape is bad. It’s even a sin. Lot offered his own daughters to the Sodomites just so they won’t get to kick his doors in and rape Badass Old Testament God’s Angels. Since he offered his own daughters whom he has complete authority over (especially since they’re minors) so as to prevent rapey sin. It’s no longer rape if you consent on your daughters’ behalf right Lot? But alas, them Sodomites prefer them Angel boys instead of lolis. But these rapists could also have thought, “raping girls leads to worse sin, like abortion!” What? Abortion as a medical procedure may not have existed before the flood? But the flood happened 2 weeks ago, here in Manila. Oh you mean Filipinos don’t count in as the chosen people? THAT’S RACIST!

Filipinos are perfectly capable of religious fundamentalism! Like seriously, fuck science! Stop the Reproductive Health Bill, because you know, USING A CONDOM IS PERFORMING ABORTION! This also makes me pregnant because I have countless sperm cells IN MY TESTICLES. Anyway, rape is bad and these Georgians and Khazaks were going to squad-rape the Russians, right before they platoon-rape them. Why can’t they just restrict themselves to sexist but appreciative cat-calls like the people of Glorious Nippon in episode 7?

Well, who are we to judge? Everyone’s a little bit rapist, right?

Even Filipinos! Even shitty singers cosplaying Hetalia Axis Powers! I enjoyed watching this musical live when a local production was held a few years back. I suppose it challenged my idea of rape as exclusively a foreign thing: Spanish Colonizers, American Colonizers, Japanese Colonizers. Man, all their dicks all the way up our colon. I then realize I could very well be a rapist too, if only a little bit.

But the Georgians and the Khazaks aren’t just interested in rape, are they? Rape was just a thing to do, corollary to what really is a means to oppress, humiliate, and abuse the Russian girls, for being Russian. It was going to be a hate crime. Of course it was averted, since the harem lead burst into the scene and saved the day. The bitch commander of the Georgians/Khazaks will soon fall under the spell of his manly penis next episode. 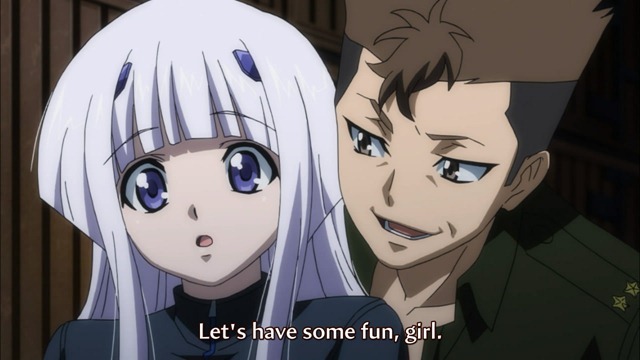 This show is shit.

That said, I appreciate how the bureaucracy is portrayed – how politics and backroom deals upend the design principles of the technology they’re testing. Organizational dynamics so often compromise the execution of projects. This is true far beyond the military industrial complex. Yui is in full dere-dere mode now, and yeah this show is shit.

I CAN’T WAIT FOR THE NEXT EPISODE!

I entered the anime blogging sphere as a lurker around Spring 2008. We Remember Love is my first anime blog. Click here if this is your first time to visit WRL.
View all posts by ghostlightning →
This entry was posted in Muv Luv and tagged Avenue Q, Muv Luv, Muv Luv Alternative Total Eclipse. Bookmark the permalink.