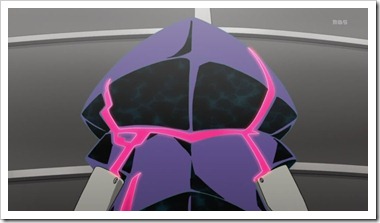 Yes, I know I’m a week late. Between family and work, life has gotten busy this Fall. But honestly, that’s no excuse. I guess the reason I’m really late is an indication of my growing frustration with this show. And this week’s episode, with it’s shotgun approach to unraveling mysteries and creating new ones, was almost a letdown. It was utterly anticlimactic.  And why do I think that?

The Mystery of Maggie Kwan is Confirmed

With very little focus or fanfare, we’re formally introduced to Maggie. While the other members of Team Goldilocks never piloted IFOs, Maggie apparently still does, and is fighting for the Allied Forces. She has been convinced that saving the kids of Generation Bleu is the right thing to do.

The Secret That Wasn’t Really a Secret About Truth

As Bones has been hinting at for the last 6 or so episodes, the true form of Truth is that of a Secret.  As we saw in the Eureka flashback, along with the following fight on the Gekko Go, Truth is a Secret that lost it’s purpose. Following the fight with Eureka, the Secret changed its form. And if Naru is correct, some amount of Scub was also brought into that form.  The way this is revealed to us was almost like the writer was saying “Didn’t you know that already?” It feels like they were looking to just rush through it in an effort to get the story on to the next phase.

Elena Drops Bombs, and No One Things Twice About it

Honestly, how many times does Elena have to say something outrageous, before anyone will listen to her? Last week, she tells Fleur that she killed Miller and took on her identity, and all Fleur can do is stare at Elena, get bitched slapped, and walk away. Then this week, Elena point blank tells Ao and Fleur that she was brought to this world by Eureka, and that she doesn’t belong here. Their reaction? More blank stares, and completely blowing her off. What the hell? You would think, of all people, Ao would be engaged in that conversation. But he has only a muted reaction. Granted, they were interrupted, but you think he would have mobbed Elena over that revelation.

The Captain Goes Down with the Ship

Once things start hitting the fan, Christophe has no intention of seeing it to the end. And in his final, desperate act, he attempts to take Truth down with some Quartz. But again, it feels like it was all rushed. What should be, in anime terms, a desperate heroic acts, feels like it was forced down our throats.

So here we are. We are at least 3 (but hopefully 5) episodes to the conclusion. There are still things that this show still has not touched on. What about the IFO in the deep basement of the Gen Bleu facility? Is Naru going to do anything other than hang out with the Scub in a white night gown? Will anyone take Elena seriously?