Posted on October 26, 2009 by ghostlightning

Delicious. What a powerful first act that could have easily served as the introductory piece for the show. Aoi Bungaku treated us in the first episode with his ‘departure’ from humanity, and now it leads us to where he departed to: the ‘beingness’ of a monster.

Aoi Bungaku is an adaptation of critically acclaimed Japanese literature that enjoys the status as classics. I have not read these stories, and probably would not be able to do so for some time, but the subject matter is rather timeless, if I may say so: the nature of being human, of evil. The story looks harshly into this, as harsh as the flash of a photograph must feel for an insecure boy in the dawn of the Showa Era.

“All my life I’ve been flattering people around me… mainly because… I was afraid of them.”

We see Youzo as a young boy forcing a smile for the photograph. Photography wasn’t exactly commonplace then, and I suppose there could be something terrifying about the contraption pointed at the subjects like a weapon, as well as the flash that explodes as if with gunpowder.

But Youzo is talking about fear of other people here. The camera is but an instrument.

“As I think back, I think I was clowning.”

This is the second reference to clowning. In the first episode, Youzo’s conspirator in the ‘anti-social’ movement praised him for his acting. He brushed it off and said he was just clowning.

Children his age terrified him — a physical challenge, to jump and grab on to a horizontal bar is literally out of his reach. In his flashback they all surround him, with a menacing buzz of snickering. This contrasts with his commentary on the scene: “As a human I can share someone’s affection, at least as the last resort.” When he fails to grab on to the bar, he passes it off as clowning — the menacing snickering turns to perhaps appreciative laughter. This, to Youzo, is ‘connection’ with humans.

A squint-eyed kid taps him on the shoulder, saying “fake… fake…”

Further clowning, he drops his pants in class, he sees the same kid see through his act. After class the short kid wipes his nose on his sleeve and is without an umbrella in the rain. Youzo doesn’t have an umbrella to offer him, but he takes him to his house, which is near.

The runty kid’s ear hurts, and Youzo cleans it with one of those wooden sticks. I remember those, as my younger brother used them even when there were plenty plastic and cotton ear buds. I remember my mother cleaning my brother’s ears the same way Youzo did the runty kid’s, who now acknowledges Youzo’s kindness, noting how he must be popular with the girls.

Youzo’s motive becomes transparent immediately: “We’re friends now. That’s why you should be sure not to badmouth me in front of others.” The kid reacts to this by calling him a monster, telling Youzo that a monster is his true identity.

“Hey, people always called me cute, handsome, or interesting. But I’ve never heard anyone call me a monster.” He sees his monstrous reflection hover over the kid.

I think at this point, Youzo tries to clown his way out of this frightening exchange. He ‘admits’ to being a monster, while putting on a ‘hahaha lolololol’ mien. But his laughter is hysterical, then he breaks down… only to wake up on his hospital bed remembering Mayumi who he killed. 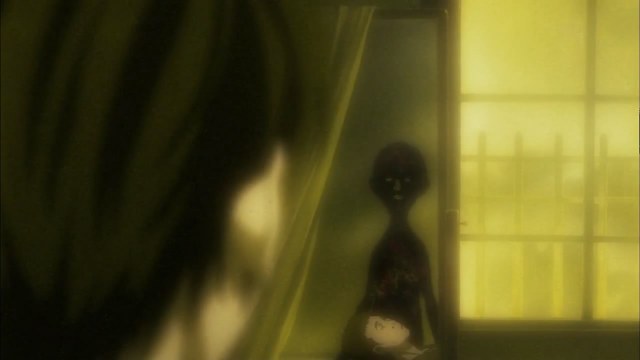 A nurse stands over him, asking him if he remembers his identity. He responds with, “A monster.”

But what is a monster here? The monster so far is defined by his clowning, out of a need to control or manipulate others, which in itself born out of an abject fear of them. The camera is easily enough a symbol of being captured. One’s image is caught on film, and Youzo can easily feel ‘exposed’ by it.

Monstrosity, implies evil, and evil is fundamentally deceit. I have gone to some lengths talking about inauthenticity in last season’s Bakemonogatari, without going further into what inauthenticity means. It is in itself a deceit, and it is a fundamental part of what is commonly ascribed to evil.

In Judeo-Christianity (I mention this only because it is what I am familiar with) Satan. “the enemy” is given the title “the prince of lies.” The first truly evil act was the temptation of Eve in the Garden of Eden. What was evil about the temptation? Deceit, in that the serpent spoke as if he had Eve and Adam’s best interests.

So we see here in two religious belief systems the first evil act is deception, is manipulation. We see this in Youzo, in his clowning, in his false offers of friendship. This is why it is a logical leap for him to relate to himself as a monster.

A monster is a being of lies.

I now wonder at what Youzo is crying about: Mayumi’s death, or how his father disowned him for fear of scandal… perhaps both? Perhaps it’s his own acknowledgment of how evil he has become.

It might well be, since he started playing up his monstrosity to himself: he starts misrepresenting the events that lead to Mayumi’s death, giving it more scandalous airs. This is delicious, in that he has resorted to some form of self-flagellation — such a terrible conceit and self-deceitful many times over. He’s clowning to himself!

Then a treat of a flashback: Youzo’s ‘bought’ friend showed him a print of Vincent van Gogh’s self portrait, calling it ‘the portrait of a monster. Vincent van Gogh is now regarded as one of the greatest painters ever, and his work is said to have contributed much of the art that succeeded him. Van Gogh is interesting here also because he suffered mental illness and fought bouts of anxiety for most of his life, until shooting himself at age 37.

He was largely unknown, despite his considerable output. His mental illness is quite romanticized, and is told thusly to have influenced much of his work. Aoi Bungaku is part of this romanticism, albeit very interestingly so by calling Van Gogh a monster outright, as opposed to the fawning kind of remembering love, as the singer-songwriter Don Mclean wrote this tribute for.

From the Wikipedia article:

van Gogh’s sordid relationship with Paul Gauguin,[2] with whom he had, as with many others, a complex sort of relationship, which was so intense as to lead Van Gogh to think it rational to cut off a part of his left earlobe as a sign of cutting Gauguin out of his life and heart. That led Gauguin, who had also had severe bouts of depression and suicidal tendencies, to distance himself from van Gogh, tumbling the already troubled artist into a schizophrenic depression, the theoretical straw that broke the camel’s back.

Youzo attempts to copy van Gogh’s self-portrait, and somehow, the monster that he’s been seeing in the reflection results in the canvas. It emerges form the page, as if to devour him. Youzo realizes that it’s something he can do. He can draw monsters, he can draw “the real me.” He starts drawing the monster feverishly, but when he starts remembering Mayumi’s words, about wanting to be reborn a human, he rips apart his drawings and finds blood on his hands. 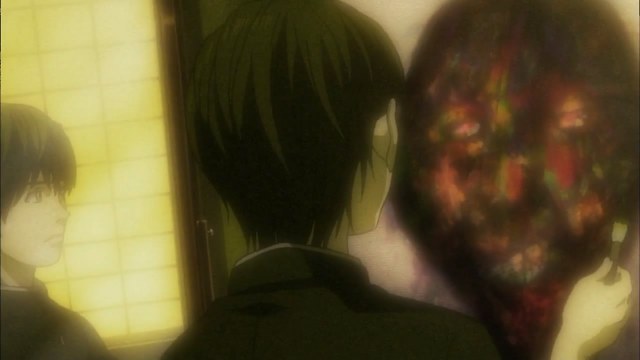 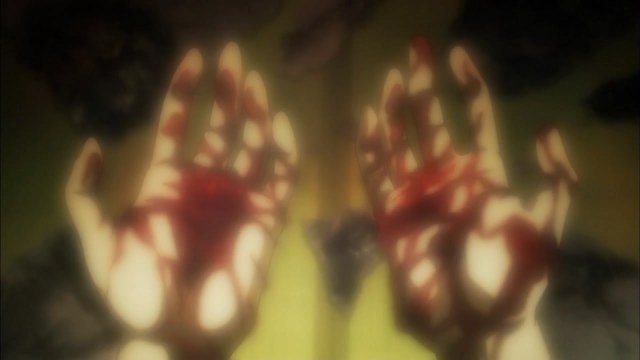 “This is not right. A monster cannot live in a human world.”

He attempts to escape the prison room his father the Congressman built for him, resolving to live like a human being, but he sees his monster self climbing down after him. He tries to reach out to a fellow artist, his partner in the con-game (Horiki; it’s unclear to me if this is the friend he bought as a child), but Hoiriki made fun of him in polite company. Dejected, Youzo leaves. The lady reporter who once rejected the offer to chase Youzo’s story shows concern, but the artist (a comic strip illustrator, perhaps) dismisses it as just one of Youzo’s acts.

The reporter’s editor boasted to her that Youzo’s story is just the kind of thing that (older) women would eat up, and she found this insulting perhaps. And yet she found herself chasing Youzo, and inviting him to her home where she lives with her young daughter. Like Mayumi, her husband is gone (perhaps dead).

“My house is not up to human standard, so I hope you don’t mind.”

Who’s she kidding? She’s about to let a monster into her family.

Inauthenticity, being, and Bakemonogatari, the WRL coverage [->]

I entered the anime blogging sphere as a lurker around Spring 2008. We Remember Love is my first anime blog. Click here if this is your first time to visit WRL.
View all posts by ghostlightning →
This entry was posted in Aoi Bungaku and tagged aoi bungaku, vincent van gogh. Bookmark the permalink.

13 Responses to The Nature of Monstrosity: Aoi Bungaku (02: Monster)