I had a few ideas on how an anime is produced, though these were from documentaries of western animation, and my own experience as a production assistant for broadcast and film as well as project management of various kinds. Nonetheless I approached my introduction to anime productions with eyes as fresh as I could make them, when TOEI showed us a video of their process as well as their public relations guy Jay Hernandez (who’s an animator himself) giving us the lowdown during our tour. I won’t be able to show you their actual ‘how-to’ video, but I can use images from Otaku no Video!

Planning is the first step, where the ideas are presented to the planning team and discussed. This stage involves the identification of the target market, and the overall marketing strategy.

I imagine that merchandising activities are also identified at this stage. The usual manufacturers and distributors are put on the short list, as well as the intended networks and potential advertising partners. 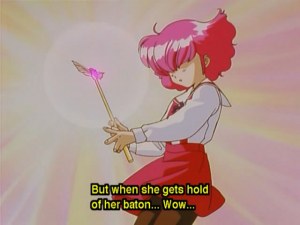 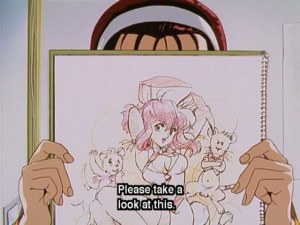 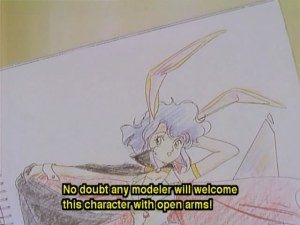 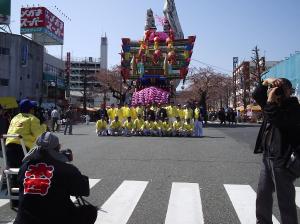 In the Background Design stage the designer effectively ‘stalks’ environments either as models or actual subjects for the background art in the animation. We’ve seen a number of settings that are very consistent with real environments, even when science fiction elements are applied, like the Ghost in the Shell movie’s Hong Kong.

Hand-drawn images are digitized and drawn over. Here is some re-used but relevant footage to our discussion: How I drew tried to draw the above piece of wood for One Piece:

The Digital drawings are created  using the RETAS PRO SUITE of animation software, gone are the days of hand-drawn cels, like how the folks at GX used to do it in Otaku no Video.

Key Animator: Keys (aka Key Poses, Key Drawings or Extremes): The keys are the extreme drawings or images of an action, produced by the animator to create the structure of the animation. One can imagine them as a starting pose of a character, and the finishing pose of the same.

The In-between Animator is the one who draws the images that ‘fills the gaps’ between the Keys. In the images above, Jay Hernandez makes in-between drawings for the Key frames in One Piece and Fresh PreCure respectively.

Once the drawings are complete, the Color Stylist does her work, though it’s all digital now compared to the GX work on Misty May in the image above. While animation production remains an expensive venture, I imagine it to be less so – which should explain the massive number of shows that have been produced over the last decade.

These are all put together by the Editing Staff, which under the guidance of the director, prepares the animation for the sound, voices, and music to be added.

Not really news to me, but after hearing the explanation at TOEI and watching recording sessions (site linked to may have NSFW images in its sidebar though post linked is SFW), it makes more sense to me how the scene must be produced first before the actors record their lines. The Seiyuu (Voice Actors) dub their lines next.

To match the visual SFX, Sound Effects are then mixed into the footage.

The BGM (Background Music) is selected (if already composed). Here’s a link to the translated interview from Newtype magazine of Kanno Yoko and Kawamori Shoji about their work process in creating the music for Macross Frontier. An excerpt:

Kawamori: The way ~F was made was really like a musical. I’ve heard that in musicals, the composer is involved in the storyline. Ms. Kanno’s role was just that.

Kanno: No matter what project I am involved in, I believe it is always my job to show through music what the images cannot express. But almost always, once I hand over the score to the director, my job is over. It’s a one-way flow of my ideas. But this time around, I would tell them ‘I handled it in this manner and made it like this,’ and a response from Mr. Kawamori would come immediately. This is my first time doing a job that is not a one-way flow. So, to have been involved in this project, I am happier than anyone can imagine.

Then the Final Sound Mixing is done, and the anime is ready for screening!

Thanks to Jay Hernandez, my cousins-in-law Jarlon and Riza Sison, and Soya Satoshi Sachou of TOEI Philippines for their hospitality and one very educational trip.

Some trivia: 70% of TOEI’s drawings are done in the Philippines. 234 drawings are expected per employee every 15 days.

Guide to Key and In-between animation [->]

I entered the anime blogging sphere as a lurker around Spring 2008. We Remember Love is my first anime blog. Click here if this is your first time to visit WRL.
View all posts by ghostlightning →
This entry was posted in Craft, fanboy, meta, only in the Philippines and tagged anime industry, otaku no video. Bookmark the permalink.

37 Responses to Steps in Anime Production