The Blade is Broken, the Combat is Non-lethal; and Yet, Broken Blade 03 is Superb.

Posted on February 2, 2011 by ghostlightning

After three episodes/films I think Broken Blade has grown stronger. Part of this is how the background story’s flimsiness is mitigated by the sheer amount of time spent depicting the smaller robot battles – small enough to be called skirmishes. A lot of thought and detail went into the depiction and direction of the fights in Broken Blade and while it does cover its (otaku data)bases with its nudity, under-aged characters with ridiculously mature bodies (read: giant boobs), and BL slash-bait; most of its effort went into the presentation of the robot fights.

What’s interesting to me, beyond the heroics and the choreography in the fights, is the preoccupation with casualty avoidance and the preservation of life among the combatants. Whereas I find this quite common in robot shows, it’s never satisfactorily handled. Broken Blade seems to have taken this very seriously, and I’m very impressed.

One of my annoying memories back in childhood is that of watching Hasbro cartoons such as G. I. Joe and Transformers. What annoyed me precisely was the sheer array of lethal weapons, the intensity of the firefights, and the abundance of explosions result in zero casualties. There were barely any injuries, and no deaths. I was neither stupid nor naïve. I know guns kill people – I grew up around soldiers and police officers too.

Also, prior to watching the castrated combat from these shows, I had enjoyed myself at a much younger age with Japanese anime: Voltes V, Daimos, SDF Macross, and Gatchaman – four examples from many that had a whole lot of casualties on a per episode basis. One may question the amount of missiles landing on friendly forces and defense installations in Voltes V and Daimos, but it made perfect sense that when missiles explode, people die. 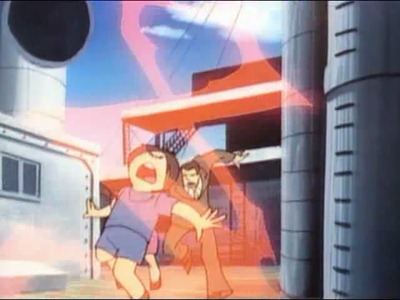 All this contributed to my annoyance with the American cartoons. It’s not that I hated them. It just so happened that when us kids played with our G. I. Joe action figures and vehicles, soldiers that get shot, get killed. That’s the irony I think. The more these American cartoons withheld death and dismemberment onscreen, the more us kids actively imagined them while (role)playing.

This long preamble sets the table for my appreciation of Broken Blade. It is remarkable that after three episodes, it has preoccupied itself with the prevention of casualty during combat in a wartime context. In the tradition of robot anime, often we see the pacifistic lead pilot at some point develop God-like abilities and are instantly capable of incapacitating the humanoid machines, without killing the human pilots. Two standout examples are Eurkea SeveN (it’s rather abrupt and almost magical); Mobile Suit Gundam SEED and Mobile Suit Gundam SEED Destiny (it’s um, Jesus-like). If memory serves, Mobile Suit Gundam 00 as well. For a little remembering of fail: Macross Frontier ep 12 wherein a few hundred GIANT ZENTRAEDI SOLDIERS couldn’t hit each other at practically point blank range in a pitched firefight (there were no casualties whatsoever). 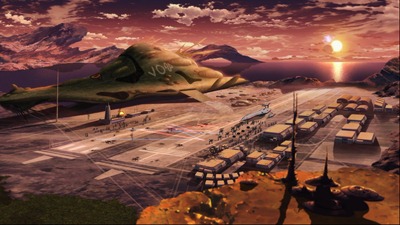 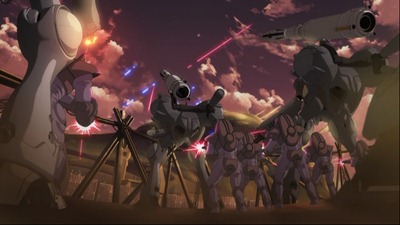 I never liked how these shows executed the insta-pacifist bit. Robot anime is superbly suited for this kind of sanitized violence because it still portrays very violent and at times brutal fights between humanoids and yet never have to show people getting bloodied and killed. Still, there’s something oppressive to me about this kind of sanitation. It’s inauthentic and deceitful. There reasons why trying not to injure an opponent who’s trying to kill you is exponentially dangerous to everyone involved, but I no longer need to publish a diatribe about it because Broken Blade is in some ways an essay on this matter, as it is portrayed in robot anime.

Rygart, much like most (real) robot anime protagonists is thrown against his will into a robot cockpit and must then seize the reins of history. He is a bit more extreme in that he is a non-soldier wholly unqualified in the ways of combat. In the fantasy universe of Broken Blade, one is required to have some facility for magic to operate the crystal-based robots (a rather fascinating contrivance, as the combat produces a lot of shattering in its violence, and gives a very “weathered” look to the mecha despite having bright colors and the anime using a bright palette overall). Rygart does not have any magic; to borrow terms from Harry Potter, he’s either a “muggle” or a “squib.” Unsurprisingly, he has an innate ability to operate the “hero mecha” of the series, and that his unwillingness plays out in his early engagements when he is quite averse to killing. 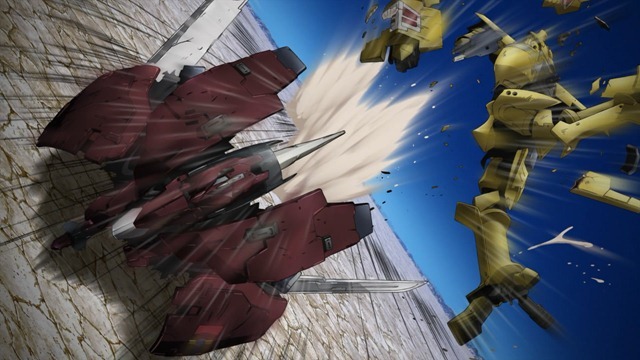 The drama in the second episode/film is how his reticence to finish off a seemingly incapacitated enemy unit resulted in the death of a comrade. I found that incident very fresh and memorable. I’m very, very pleased at how it’s explored even further in the third episode as something that resembles a major theme in the show.

The lesson to be learned by Rygart: the attempt to spare an opponent’s life can cost up to three lives among the people who fight on your side.

As soon as Rygart attempts to take this to heart, he is confronted again by having to fight his friend Zess directly. The miracle that allowed Zess to survive their rather intense and well-directed duel was an entertaining contrivance. He let go of the broken blade as it bit into the torso of Zess’ robot. 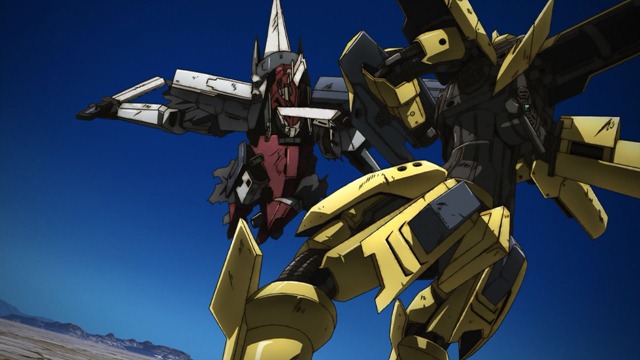 The remnants of Zess’ crack unit then mount a desperate rescue which succeeds at the cost of Cleo getting captured.

All this suggests to me a preoccupation with the sparing and rescuing of combatants. Where most other shows in the tradition engage this in a cavalier fashion, Broken Blade takes it very seriously. It pays attention to many details that goes for a commendable verisimilitude that underlies the fantasy that goes into its stylized combat between humanoid mecha.

What also makes it work is that in most other cases, pilots do get killed when their robot gets mowed down by gunfire, or blasted apart by one of the greatest tackles in the history of mecha anime. It makes me look back and have a laugh at how those amazing C. O. B. R. A. “Rattler” pilots who automatically parachute out when their fighter craft gets shot up (G. I. Joe). I suppose both shows take pains to show how the pilot doesn’t die due to violence, but it’s Broken Blade that comes from a more authentic place.

Do I think this is a compelling enough reason for casual viewers to take to Broken Blade? Probably not. It does however, show me that it does something interesting and nuanced with its spectacularly animated robot battles. If you’re into robot fights (and you must be if you’re a fan of robot anime), Broken Blade will not disappoint (unless you actually prefer more flash in the form of contemporary AU Gundam shows).

I obviously think highly of robots fighting in anime, as it is the primary draw for me to this medium.

We think highly of the combat in Broken Blade, and count two examples from the previous episodes/films as one of the best of its kind in 2010.

I entered the anime blogging sphere as a lurker around Spring 2008. We Remember Love is my first anime blog. Click here if this is your first time to visit WRL.
View all posts by ghostlightning →
This entry was posted in analysis, Broken Blade and tagged break blade, broken blade. Bookmark the permalink.

14 Responses to The Blade is Broken, the Combat is Non-lethal; and Yet, Broken Blade 03 is Superb.