Char, I am Disappoint: Revelations of a 3rd Viewing of Char’s Counterattack

I think Mobile Suit Gundam: Char’s Counterattack is an exceedingly important movie in that every time I view it, my opinion of something I had thought to be fundamental to the Gundam franchise changes. The first time I watched it (2008) I was a skeptical non-fan of the franchise as a whole, and was intensely disappointed by what I thought was an unnecessary distraction to the whole narrative: the Quess Paraya sub-plot. I took this as an indicator of the weak, or silly plot craft of Tomino’s parts in the franchise as a whole.

I had seen it again last year, and by that time I was already won over by Gundam by and large. The significant change after this viewing was my attitude towards the Newtype conceit, and its close affinity with deux ex machina habits to end shows. I had accepted that this was fundamental to Gundam, and if I can’t get past my dislike for these, I will not be able to enjoy the franchise as much as I intended.

This would be such a waste, and would be inconsistent with my actual feelings of intense enjoyment of many of the shows. A big part of my enjoyment of the Universal Century is the very idea that it is the narrative milieu where Char Aznable did his deeds. Even during my most skeptical days, I had never not liked Char.

Yes, he was smooth and had incredible charisma – but these are superficialities to what I find so fascinating about him. For the most part, I agree with Iknight’s reading, wherein he compared the circa CCA Char to the Anti-Spirals of Tengen Toppa Gurren Lagann:

The Anti-Spirals are not villainous; they are a dedicated and hard-working group who have sacrificed pretty much anything a human can sacrifice in order to protect the universe from destruction. Their resolve and integrity are unquestionable, which is why it takes an equally resolved set of heroes to defeat them. The Anti-Spirals are a pretty admirable bunch, in a funny kind of way. I term their unswerving (and wierdly selfless) integrity purity of purpose; they may be wrong, but you can’t call them hypocrites or simple powermongers.

Char Aznable, by the time of his Counter Attack, shares the Anti-Spirals’ pessimistic picture of human nature. He and Amuro agree that humanity has to colonise space in order to further their evolution into something less prone to war,¹ but Char feels that humans need some encouragement. Encouragement in the form of a giant rock crashing into the Earth and rendering it uninhabitable (this is anime, after all).² Amuro is prepared to, as he puts it, ‘wait for humanity to learn and grow’ and – just like the Anti Spirals puzzling over Simon’s continuing resistance – Char can’t understand Amuro’s faith in humanity

But Char, who (as I read him) has always operated on the basis that the ends justify the means, proceeds unwaveringly towards his goal. Again, not a self-interested antagonist, grasping for power, but a man marching onwards with the absolute conviction that he is correct. Neither Char nor the Anti-Spiral represent some dramatic revolution in storytelling, but they are both very well-executed examples of the villain who can oppose the hero while keeping his own integrity intact. I, for one, find this kind of opponent builds up the hero, too: it’s one thing to physically defeat your opponent, and quite another to challenge their whole view of the situation – and perhaps it’s most satisfying for the hero to do both.

All very interesting, because what this 3rd rewatch gives me is the opposite of this reading!

Perhaps, I should say that the second half of the film gives me the opposite of this reading. The first half of CCA set Char up to be this powerful and charismatic ideologist, who only so happens to find a scorched-earth strategy acceptable. 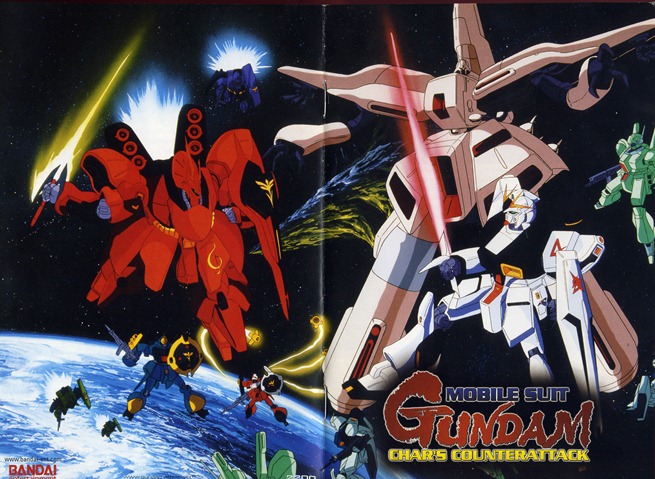 In the second half, the closer Char seemed to the resolution of all his plans, the more outright lies he told people: his allies! He lied to Gyunei about his interest in Quess, and lied to Quess about loving her back (“I’ll forget about Lalah and Nanai” LMAO), and lied to Nanai as well (“I need you here with me” I never thought for a moment that Char loved Nanai).  It’s interesting that what he told Gyunei is actually truthful in its twisted way: that he cared nothing about Quess and was really only interested in Neo-Zeon and defeating Amuro.

However, I don’t even fully accept his interest in Neo-Zeon. His suicidal bent at this point tells me that he doesn’t see himself transitioning humans into a post-Earth world; ergo, it doesn’t matter so much if Neo Zeon leads it. As it is, there isn’t a level of succession within it to ensure any form of a sustainable future. Neo-Zeon remains a cult of personality. He just wants to make sure that a post-Earth world happens. As we eventually find out, there isn’t much of a Neo-Zeon without Char. 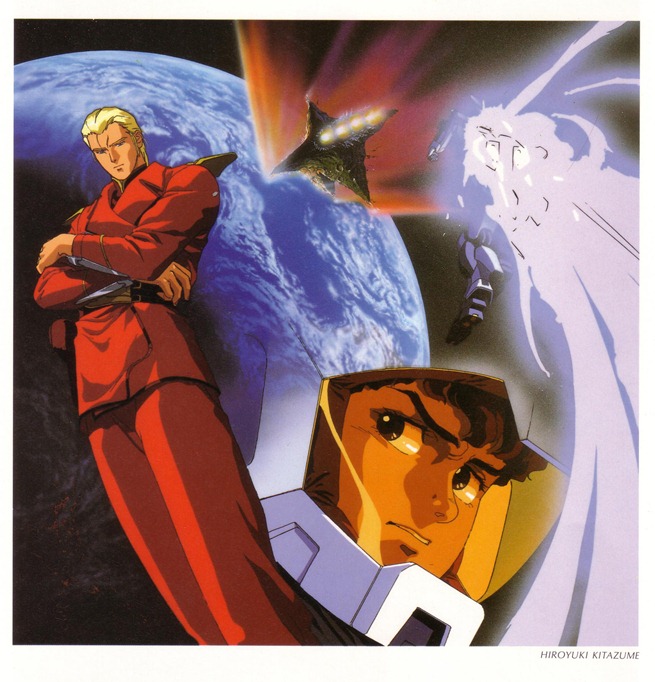 The final confrontation between Char and Amuro is characterized by Char wanting to face the best possible version of his nemesis. Consider his actions:

Char had his death wish. He ensured Amuro would get god mode levels of ability. While Char faced stronger suits at clear disadvantages (see the finale of Z Gundam, when he faced both Paptimus Scirocco’s The O, and Haman Karn’s Qubeley with his inferior and damaged Hyaku-Shiki at once), Amuro in the Nu-Gundam is on another level of ability. Amuro was simply untouchable in CCA, in one of the best if not the best performance of an ace pilot in Universal Century Gundam.

The feeling the final moments between Amuro and Char gave me is how Char revealed himself to be such a small human being. This wasn’t the hero (who is willing to be hated by history to do what he believed was best for the future of all) that the first half of the movie set up. This wasn’t the hero that fought valiantly during the entirety of the Gryps conflict (and on the side of the Angels too!). This was more like the revenge-driven slickster that did more than significant things to undermine The Principality of Zeon in the OYW.

Only now, his smoothness is marred by something in the province of pathetic. While it was easy enough to root for him as he took out Kycilla Zabi in A Baoa Qu with a bazooka, it’s disappointing to watch him lie to Quess and Gyunei, and how he led Nanai on.

I imagine myself to be one of the Neo-Zeon mobile suit pilots who attempted to push back the rear half of the Axis asteroid along with the Feddies, when they perhaps figured out that Char was already gone. I mean, why would they do that at all? I interpret this as Char not revealing how he really intends to accomplish his ends to the front line. It’d be similar to how Anavel Gato despite being an officer was kept in the dark about the actual strategy and plan of Operation Stardust in Mobile Suit Gundam 0083: Stardust Memory.

There were Neo-Zeon soldiers who didn’t think scorching the Earth was an acceptable strategy. Char wasn’t truthful to them as well. Char lied to everyone anyway. What I find remarkable and fascinatingly disappointing is how Char lies were. They weren’t great lies, they were small, petty, and manipulative things. They were lies of someone who perhaps felt close to the end, who was certain of death, and just stopped caring.

Char made everyone think that he was the one to change history, on both sides of the conflict. Blex believed in him, Amuro did too for a time; Bright and Sayla did as well, and Haman Karn gave him every opportunity to create a new world with her.

The thing is, Char wasn’t even selling anything. He never did, until Blex started filling his head with a sense of importance. In the One Year War Char just wanted revenge against the Zabis for killing his father. In CCA, beneath all this world-destroying for world-building theater, Char just wanted to beat Amuro on his own terms and die trying. Why? Revenge for Lalah – who Amuro didn’t murder: she sacrificed herself to save Char. Char’s just angry and hates himself and irresponsibly dragged so many people down.

It’s his soul that’s weighed down by the gravity of his own hatred.

Liking Char this much, is what I would call an authentic guilty pleasure. I attempted to describe here how my latest rewatch of Char’s Counterattack revealed to me how incredibly small a person this character was – not ended up being; he was this small and petty man the whole time. The guilt is for my incredible fascination for him, akin to my fascination for other anime ‘villains’ though outside of Macross characters, I still hold Char as my favorite character in all anime.

My initial attitude towards CCA is rather unforgiving [->]

I entered the anime blogging sphere as a lurker around Spring 2008. We Remember Love is my first anime blog. Click here if this is your first time to visit WRL.
View all posts by ghostlightning →
This entry was posted in analysis, Gundam, showing a bit of character and tagged char aznable, char's counterattack, gundam. Bookmark the permalink.

70 Responses to Char, I am Disappoint: Revelations of a 3rd Viewing of Char’s Counterattack